Rod Brooks is CEO of Rise Against Hunger 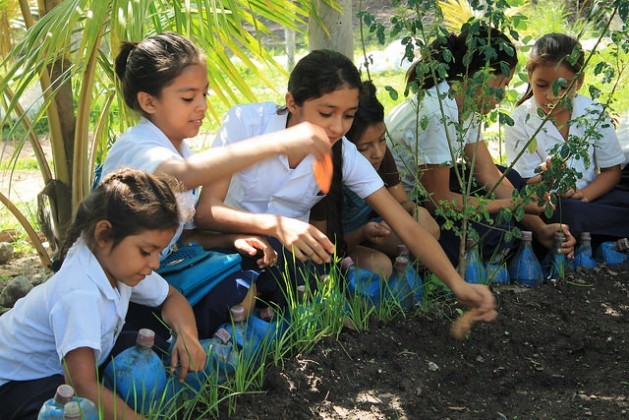 Students at a school in an indigenous village in western Honduras work in the school garden, where they learn about nutrition and healthy eating. Since 2016 Honduras has a law regulating a new generation of school meals programme, which focuses on a healthy diet and serves fresh food from local family farmers and school gardens. Credit: Thelma Mejía/IPS

RALEIGH, NORTH CAROLINA, Oct 11 2017 (IPS) - The Food and Agriculture Organization (FAO) recently announced that the number of hungry people in the world has increased by 38 million in the past year due to climate change, conflict and slow economic growth. Given this setback, can we, in fact, end hunger in our lifetime? The answer is a resounding, Yes, we can. The first step is simply wrapping our minds around the reality that—yes—ending hunger is possible.

Tremendous strides have been made over the last two decades as the percentage of the world’s population suffering from hunger has decreased from 24 percent to 11 percent. We are on such a trajectory to end hunger that the United Nations established Sustainable Development Goal #2 – to achieve food security and improved nutrition, and promote sustainable agriculture in our lifetime—by the year 2030.

Clearly, we have work to do to achieve this ambitious goal, which is not in some far distant future. Complacency and business as usual will not get the job done. To be successful, we must not perceive an end to hunger as one large and daunting task. Hunger should be examined as a group of problems that—when viewed as separate, smaller issues—can be tackled through multiple, obtainable goals.

The journey out of poverty and hunger for millions of people can come to a long-awaited end if we create the political and moral will to do so and we act strategically by nourishing lives, empowering communities, providing emergency relief during crisis and growing the movement to end hunger.

Nutrition serves as an incentive for parents in poverty stricken areas to send their children to school. For many kids, humanitarian meals become a physical symbol of hope.
One of the most effective ways to break the cycle of poverty is through school feeding programs. Hunger is a barrier to education, which is in turn a barrier to steady employment, health, infrastructure and economic growth. A school principal in Kenya summarized this best during a visit in his community: without the meals provided by organizations like Rise Against Hunger, kids don’t come to school.

If they fail to come to school, there is no education. Without education, there’s no hope for transformation, and the cycle of poverty continues. Nutrition serves as an incentive for parents in poverty stricken areas to send their children to school. For many kids, humanitarian meals become a physical symbol of hope.

We know that through providing nutrition today, we can change lives and build strong communities for tomorrow. We do so by empowering these communities to become self-sufficient, to learn sustainable farming practices and by stimulating economic growth that improves their resilience during times of strife.

Putting all these pieces into practice may seem staggering, but that’s why organizations like the UN and World Food Programme (WFP) are in place, to provide the data, science and international infrastructure needed to tackle this problem. But, I’m telling you—the ways to end hunger are scalable and it starts with each of us. There’s no need to purchase a plane ticket or even leave your hometown to participate in ending world hunger.

Local meal packaging events are the first step to providing nutrition to the world’s most vulnerable people. Your age, gender, faith, political affiliations—none of these preclude you from taking a small action—that when multiplied by individuals and communities around the world, will help feed the 815 million people who do not have enough food to live a healthy, productive life.

As October 16— World Food Day —approaches, let us be reminded of what we can achieve through working together, by becoming educated, participatory advocates for the world’s hungry. The world has enough production potential. Ending hunger by 2030 is at your fingertips. This is possible.