Rev. Patricia Ackerman is an Episcopal Priest in the Diocese of New York, and the New York UN Representative for the International Fellowship of Reconciliation.

NEW YORK, Oct 20 2017 (IPS) - On September 29, 2017, Yvette Abrahams, an indigenous religious leader from Cape Town, South Africa who served as the country’s Commissioner For Gender Equality for five years, gasped when she learned that South Africa had just voted in favor of United Nations Human Rights Council resolution condemning the death penalty for those found guilty of committing consensual same-sex sexual acts. She could not believe that the United States had not. 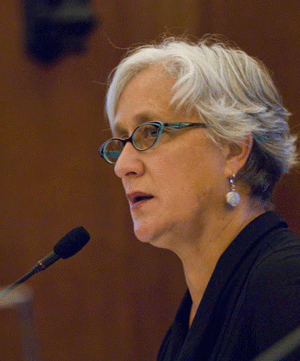 Just the month before, waves of concern arose in her as she read the text of the Nashville Statement, an anti-LGBTIQ document authored by the conservative Christian Right in the US, with the aim of equipping pastors with a consolidated justification for excluding LGBTIQ people in both spiritual and civic life.

Abrahams herself has lived through the effects of US based anti-LGBTIQ efforts that are are exported to Africa, leading to deaths, rapes, and beatings. Working against anti-LGBTIQ violence in South Africa and across the continent has been her life’s work, so Abrahams immediately noted that many of the Nashville Statement signers had also funded anti-gay legislation across Africa.

This is why she plans to travel to the UN Headquarters in New York on October 26th for the Ethics of Reciprocity dialogue, to begin a meaningful and healing conversation with her religious opponents.

Abrahams is joined by LGBTIQ faith leaders around the world – including supporters of the Nashville Statement – for the first expert-level international discussion by interfaith LGBTIQ religious leaders at the UN about how to work together to end abuses, violence, beatings, and murders of LGBTIQ people, often because of religiously sanctioned beliefs.

Yvette Abrahams knows that this dialogue can save lives. She was a key player during End Hate Campaign in the South African West Cape, working to highlight hate violence against LBGTIQ people.

“As late as 2008 there were no monitoring mechanisms or reporting systems for such crimes, and political leaders did not even recognize this as a problem”. She recalls a conversation she had with a Ugandan activist:

“We realized we were both dealing with criminalization, and then police abuse, which made reporting almost impossible. In Uganda, the arrests of LBT/Kuchu people weren’t always recorded because the police were using sexuality to extort money instead of pressing charges – making it difficult to track police abuse.

She explained to me how if you’re arrested in Uganda, the police lock you up and intimidate you, and because they steal your money, they won’t report the arrest. This violence has been made invisible.

Abrahams and Byamukama recount the story of a Ugandan lesbian woman who was raped: “So many people – church people and members of my own family – told me that this was God’s way of punishing me for being a lesbian. Because I was unwilling to ‘change’, they said, God was using this method to teach me a very hard lesson…I was hurt in two ways; firstly I was dealing with the pain and humiliation of the rape, and secondly I suffered because of my people’s judgement.”

Both leaders say that rape as an ‘instrument of God’ is common in South Africa and Uganda. A number of conservative, moderate, and progressive religious organizations such as C-Fam, The Salvation Army, The Lutheran Church, numerous Catholic religious orders in consultation with the UN including Sisters of Mercy, Franciscans, Augustinians, and Big Ocean Women, many other are attending.

Noticeably absent from the consultation will be the Office of the Holy See at the UN, the Vatican. Father Roger Landry, Attaché, has stated he “doubts they will attend.” About their participation in the UN event, Byamukama said: “This is where we stand together or fall apart. We cannot afford to waste energy fighting each other. The UN is the closest thing we have to a world government. It is where conversations about love and justice should happen on a planetary scale.”

Religious leaders participating at the Ethics of Reciprocity dialogue hail from Uganda, Malawi, Tajikistan, Hong Kong, Australia, Samoa, South Africa, Ghana, and Brazil. This is the first time LGBTIQ faith leaders will be formally addressing communities at the UN, where international leaders will hear these stories from Muslim, Jewish, Christian, Indigenous, and Buddhist faith traditions.

There was also the US’s recent affirmative vote in the UN resolution on a ban on the death penalty for homosexuality as a renewed call for religious leaders to commit to end to criminalization and violence of LGBTIQ people. “The death penalty for consensual same-sex acts currently exists in 13 countries, but the Universal Declaration of Human Rights is clear that all of us are born free and equal. It’s time for faith leaders to come together where we agree, which is to treat others the way we would like to be treated – free from violence. The golden rule of do unto others is something we can all agree on.”