GENEVA, Oct 17 2017 (IPS) - On the occasion of the 2017 International Day for the Eradication of Poverty, the Chairman of the Geneva Centre for Human Rights Advancement and Global Dialogue H. E. Dr. Hanif Hassan Ali Al Qassim observed that the unprecedented rise of violence and insecurity in the Arab region combined, breed poverty and societal decline. 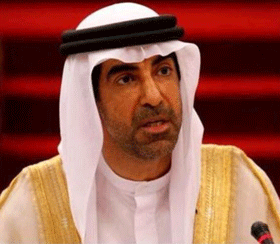 He noted that the Middle East and the North Africa region was once at the forefront of progress to alleviate poverty and hunger – in line with the provisions set forth in Millennium Development Goal 1 – but noted, however, that a multitude of factors have contributed to a reversal of progress undermining the alleviation of poverty as stipulated in Sustainable Development Goal 1 to end poverty in all its forms everywhere by 2030.

In this context, he stated that “the spread of conflict and violence have left a social and political vacuum that has been filled by violent and extremist groups. The persistence of political and social unrest in the Arab region have become the main drivers of poverty. Approximately 2/3 of the population in Syria are now living below the poverty line. In Yemen, more than 50% of the population live in extreme poverty, whereas this malaise now affects around 1/3 of Libya’s population. Insecurity driven poverty and fragile societies – gripped by violence and conflict – have thrown Arab countries into chronic poverty and societal decline.”

He further added that “the failure of diplomacy to create peace and stability in countries affected by conflict and violence has triggered a massive movement of people escaping insecurity and sectarian violence. Refugees, migrants and internally displaced persons in the region experience extreme poverty in a way unbeknownst to them hitherto. They have lost livelihood opportunities and have inadequate access to basic services. Forcibly displaced people remain stuck in limbo as they are either unwanted or forced to live in destitution in refugee or detention camps, after having witnessed the destruction of their home societies. The current situation undermines the prospects of recovery of conflict-affected societies from the adverse impact of armed conflict owing to the destruction of human capital and of a stable middle class.”

The Geneva Centre’s Chairman further observed that “the adverse impact of climate change has contributed to exacerbating all forms of poverty and food insecurity in the Arab region as a result of lack of access to renewable and non-renewable resources. Depletion of resources, desertification and water scarcity are indiscriminately affecting countries in the Middle East and North Africa. It has given rise to an ecological crisis affecting the livelihood of millions of people and forcing people to flee.”