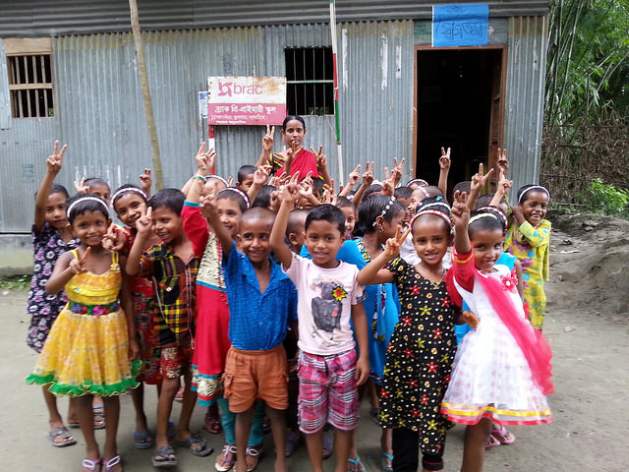 The United Nations estimates that by 2030, the youth population will be 1.3 billion globally. Credit: Mahmuddun Rashed Manik/IPS

JEDDAH, Saudi Arabia, Oct 12 2017 (IPS) - Investing in youth by developing their potential through education, job creation and instilling the values that advance the cause of humanity is the most daunting, yet promising challenge facing world leaders.

The challenges our society faces today cannot be divorced from those faced by the youth. Recently, the international community agreed on implementing the Sustainable Development Goals (SDGs) by 2030. We must keep in mind that the relevance of each of the SDG goals to the youth must constantly remain a top priority.

A United Nations report, titled Youth Population Trends and Sustainable Development, estimated that as of 2015, there were 1.2 billion youth in the world, aged 15-24. This figure will increase by 7 percent by 2030, raising the youth population to 1.3 billion globally.

According to UN data, the youth population will grow by 15 percent in Jordan, Iraq and Saudi Arabia and by 42 percent in Africa by 2030. These major changes in youth population bring tremendous opportunities for economic growth.  It can help emerging economies develop their manufacturing potential and create markets that can help drive the global economy. Yet, lack of proper planning and investment in the youth can be catastrophic, as we have seen in some countries at the beginning of this decade. The world is still grappling with these challenges.

Still, I remain optimistic. Earlier this year, the Islamic Development Bank chose “Youth Economic Empowerment” as a theme for its 2017 Annual Meeting in Jeddah. That meeting brought together youth delegates from the 57 IDB member countries to brainstorm and determine their priorities. The Youth Summit, the first of its kind in the Muslim World, convened talented youth already making a difference in education, entrepreneurship and social mobilization. Here at the IDB, it has been decided by top management to integrate youth initiatives in projects. Drawing on the IDB’s 10-Year Strategic Framework, the President’s 5-Year Programme includes key components related to youth development.

Harnessing the potential of the global youth population to become an asset in their own societies is of paramount importance. With the right policies and strategies, the youth can stay in their home countries to contribute to their economies, rather than seek an uncertain future, crossing borders only to end up in the hands of criminals.

Islam holds youth in high esteem, calls upon them to be active members in society by contributing to socio-economic development. The youth population is one of the strengths of OIC countries if the critical challenges facing this population are addressed. According to a report by the International Labour Organisation (ILO), OIC countries will remain to have the largest share of young population. In 2050, 15.9% of the population in OIC countries are projected to be 15-24 years old. This could result in OIC countries having a solid position in terms of their younger population.

While the youth population can offer great opportunities for OIC countries, neglecting their development issues can threaten socio-economic development and lead to massive youth migration to countries that offer them better life prospects, resulting in a brain drain of OIC countries.
The ILO’s ILO report on the World Employment and Social Outlook for Youth, 2016 estimated that the global youth unemployment rate is expected to reach 13.1 per cent in 2016, rising by half a million to reach 71 million. For the most part, their condition is abysmal, with high unemployment rates and widespread poverty. If the issue of youth migration is to be addressed, it will require efforts and an overarching agenda for youth development in OIC countries by multiple partners, including governments, development institutions, policymakers, economists, civil society agencies and the youth themselves.

The UN World Report (2013) states that “young migrants constitute a relatively large proportion of the overall migrant population”. The high number of youth migrant population can be explained by the “Push-Pull-Facilitation” model proposed by SESRIC (2014).  Push factors are problems and difficulties that compel young people to leave their home country or region, while pull factors are features that attract young people to the country of destination, and facilitation factors are the dynamics that enable the immigration process from the home country to the country of destination. SESRIC (2015) reports that “One of the major push factors is the lack of inclusion of OIC youth in society”, in addition to factors such as unemployment, poor working conditions, lack of political stability, the rise of extremism, poor governance, corruption, poverty and lack of freedom. The main pull factors the report highlights include higher income, better employment prospects, higher living standards, freedom and political stability. Facilitation factors are forces such as globalization, internationalization of professions and advances in information and communication technology, which has led to an increase in young people mobility, as well as easier access to information about education, employment and living opportunities abroad.

In harnessing the potential of youth in OIC countries, I believe that we must consider the push factors by undertaking two critical  objectives: (i) Productive and economically empowered youth who contribute to the development of their societies/communities; and (ii) Engaged and responsible youth who embody and embrace leadership. To achieve these objectives, we need to address the following four strategic pillars: Education, Employment, Entrepreneurship and Effective Engagement:

The main aim of these pillars is to instill in the minds of the youth such useful character traits as leadership, volunteerism, civic engagement and skill development for lifelong learning and advocacy. This sense of empowerment will create a strong bond between the youth and their communities, eliminating the need to migrate in search for better lives.

In addition to the four strategic pillars above, the following points may be worth considering as key success factors:

In conclusion, I share the popular adage that today’s youth are tomorrow’s leaders. Islam regards youth as a blessing, and holds them in high esteem. While the youth population can offer great opportunities for OIC countries, neglecting their development issues can threaten socio-economic development and lead to massive youth migration to countries that offer them better life prospects, resulting in a brain drain of OIC countries.

Addressing youth migration in OIC countries is an enormous undertaking. Therefore. I suggest that we adopt a focused, yet comprehensive approach in order to increase the impact and capability of interventions so that the youth in OIC countries can look forward to a more promising future and contribute positively to their countries’ well-being.