A Thorn in the Side of the Regime

Journalist Bülent Kenes has worked as the head of world news, and has launched several newspapers. Now though, he has had to flee from Turkey and lives in Sweden. 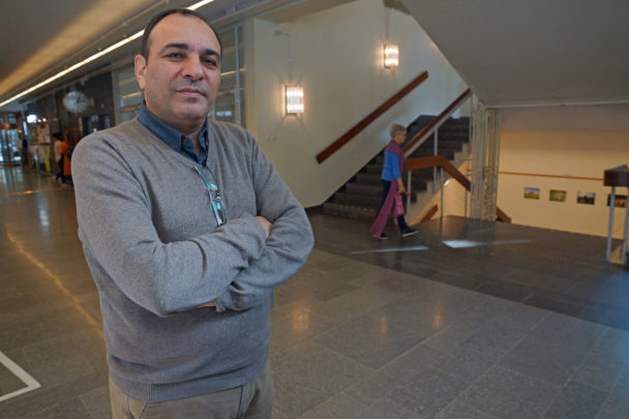 Bülent Kenes was forced to leave Turkey because of accusations against him. Credit: Erik Larsson

STOCKHOLM, Oct 17 2017 (IPS) - ”Too many things happened. The police called me to the station almost every day. My whole working day was spent defending myself. I had no time to write articles. Then came the attempted coup d’etat and my name was on a list kept by the national security service. I was forced to flee the country.”

Turkish journalist Bülent Kenes is sitting at a table at the ABF house in Stockholm, home to the Swedish Workers’ Educational Association. He has been in the country for about a year.

On the 15th of July last year, tanks rolled out onto the streets of Ankara and Istanbul. Fighter planes flew circling above and the military positioned itself at the city bridges.

But the coup d’etat failed. Turkish president Recip Tayyip Erdogan and his ruling party AKP put the blame at the Gülen movement, a political and religious network that runs several schools. The accusation made is that the movement planned the coup and led to massive clearouts among public servants including the police and the military. Thousands were fired, and many were sent to jail and tortured.

Human rights organisations such as Amnesty International have claimed that of those convicted of crimes, many have been innocent of all charges. Amnesty accuse Erdogan of using the attempted coup as an excuse for cracking down on all political opponents of the regime.

Human rights organisations such as Amnesty International have claimed that of those convicted of crimes, many have been innocent of all charges. Amnesty accuse Erdogan of using the attempted coup as an excuse for cracking down on all political opponents of the regime.
”Right after the attempted coup I was forced into hiding” says Bülent Kenes. He had been a thorn in the side of the Turkish regime for several years. In October 2015 he was arrested by a police task force because of a tweet that was perceived as an anti-Erdogan insult.

”The regime’s legal teams have sued me on several occasions” recounts Bülent Kenes.

In his columns, he has been critical of the way democracy in Turkey has been thrust back, step by step. In Turkey he is a celebrated journalist and was one of the initiators to the English language newspaper Today’s Zaman.

”We were a dangerous publication in the eyes of the regime because our’s was a newspaper that everyone would read. I wanted to give voice to everyone except the racists. We had 50 different columnists; the voices of the religious, the conservatives, the liberals, the feminists and the nationalists.

Many saw the newspaper and Bülent Kenes himself as close to the Gülen movement, which was the key reason the authorities sought him after the attempted coup.

He has given alot of thought into what happened. In particular why the freedom of the press was encroached so immediately.

”I even voted for them”, he says. There were many who did that.

During the beginning of the 2000s, Erdogan expelled alot of people positioned in what in Turkey was known as ”the Deep State”, an anti-democratic network of military and police that had controlled portions of the State. A kind of state within the State.

The expulsions gave many people hope for a more democratic Turkey. But as support for the AKP grew, the party instead began to push a more Islamist agenda and suppressed the opposition.

”Erdogan received such strong support that he realized he didn’t have to pretend to go along with democracy any longer”.

The execution of political power changed too. Instead of the detour through the parliament, Erdogan could form policy through decrees, while AKP politicians were increasingly given influence in the private sector.

”We had noticed this shift by 2011 and started to be critical towards it”.

That led to repressive measures against the jornalists and media in the country, with the regime going after editors and the journalists for having insulted Erdogan or other top politicians in articles and columns. Many were jailed.

”I have been charged with crimes 30 times and received several jail-sentences”, explains Bülent Kenes.