Dr. Joseph Gerson* is Director of the American Friends Service Committee’s Peace and Economic Security Program, Executive Director of the Campaign for Peace, Disarmament and Common Security, and Co-Convener of the Peace and Planet International Network

NEW YORK, Oct 12 2017 (IPS) - There is much to celebrate in the Nobel Peace Prize Committee’s decision to award this year’s prize to the International Campaign to Abolish Nuclear Weapons (ICAN). 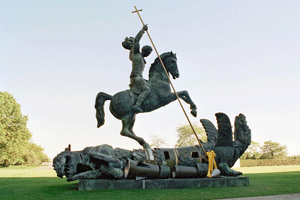 If the chilling threats of nuclear war being tossed around by Donald Trump and Kim Jung-un weren’t enough to raise concerns about nuclear weapons, press reports of ICAN being awarded the Prize have reminded people that the threat of nuclear war didn’t end with the collapse of the Soviet Union, and that there remains hope for a nuclear weapons-free future.

While the negotiation of the Nuclear Weapons Prohibition Treaty has raised hopes around the world, Donald Trump (it is painful to refer to him as president) and his “madman” approach to North Korea give lie to the myth that the P-5’s nuclear arsenals are in “safe hands.”

With his denunciation of diplomacy, and simulated nuclear bomber attacks and tweets asserting that North Korea understands only one thing, Trump has returned humanity to the brink of nuclear catastrophe on the fifty-fifth anniversary of the Cuban Missile Crisis.

The ten months since Trump’s inauguration have almost inured us to surprise, but this week midst Trumpian chaos we learned that in July Trump urged a ten-fold increase in the size of the U.S. nuclear arsenal, and that this may have been the outrage that led Secretary of State Tillerson to describe his boss as a “f…..g moron.”

The reality of the “moron” having his finger on the nuclear trigger is indeed sobering and is the reason legislation has been introduced in Congress to prevent Trump from launching a nuclear war on his own authority.

Time dulls memory and sensibilities. Recall that a year ago Trump didn’t know what the nuclear triad was and suggested that Japan and South Korea should become nuclear powers. He asked why we can’t use nuclear weapons and threatened to use them against “terrorists” (likely including Kim Jung-un. He has also said “I can’t take anything off the table.”

In his first conversation with Vladimir Putin, before labeling the New START treaty a “bad deal”, he had to ask his advisors what it was. Since then, he has pledged to “greatly strengthen and expand” the U.S. nuclear arsenal, called for a nuclear arms race, and launched a Nuclear Policy Review targeted against Russia, China, North Korea and Iran, while Congressional forces press for deployment of land-based nuclear armed cruise missiles in Europe that would sink the INF Treaty.

Compounding these dangers Trump humiliated his Secretary of State’s efforts to pursue diplomacy with North Korea, even when the “Freeze for Freeze” option provides the obvious path back from the nuclear brink. With its B-1 bomber simulated nuclear attacks on North Korea, increased tempo of U.S. so-called “freedom of navigation” naval exercises in the South China, as well as others in Black and Baltic Seas, Trump and the Pentagon have increased the danger that unintended incidents or miscalculations could escalate beyond control.

Midst it all, we have the Ban Treaty. As we see with the announcement of the Nobel Peace Prize, the Treaty further stigmatizes nuclear weapons as it seeks to outlaw their use, threatened use, development, testing, production, manufacture, acquisition, possession or stockpiling of nuclear weapons, or their transfer and deployment.

The Treaty’s greatest potential appears to be in Europe. I hope that I am wrong, but my fear is that, like the Nuclear Nonproliferation Treaty, the Ban Treaty will give us one more agreement that the nuclear powers refuse to respect.

Two trains are running in opposite directions. One, with the support of most of the world’s governments and international civil society, is racing toward a nuclear weapons-free world. The other, with the additional fuel of North Korea’s nuclear arsenal and Trump at the helm in Washington, is burning unimaginable fortunes as it speeds toward nuclear Armageddon.

In addition to further stigmatizing nuclear weapons, the Treaty’s most important contributions may be reminding people around the world of the imperative of nuclear weapons abolition, and the encouragement it gives to people and governments who are working for nuclear disarmament.

That said, the Treaty will be recognized as international law by only those states that sign and ratify it. All the nuclear powers boycotted the ban treaty negotiations. The US, UK, France, and Russia denounced it, falsely claiming that nuclear deterrence kept the peace for 70 years. (Ask the Vietnamese, Iraqis, Syrians, Yemenis, Congolese and so many others about that!) Led by the US, each of the nuclear powers is upgrading and/or expanding its nuclear arsenal. With NATO’s expansion to Russia’s borders, its nuclear weapons, and with the West’s conventional, high-tech and space weapons superiority, Moscow is “modernizing” its nuclear arsenal.

With increased Japanese and South Korean anxieties resulting from Pyongyang’s nuclear threats and growing doubts about reliability of the U.S, “nuclear umbrella,” there are mounting calls from sectors of their elites for their governments to become nuclear powers. We thus could be entering an era of nuclear weapons proliferation, not abolition.

Our future depends on how people and governments respond, and it dictates a global division of labor among nuclear weapons abolitionists. States that negotiated the ban treaty obviously must sign and ratify it as quickly as possible. And, they can do more.

As Professor Zia Mian reminds us, Article 12 requires states parties to make their treaty commitments “part of their political engagement with the nuclear weapon states.” They can dispatch delegations to encourage others to join the treaty, and they can initiate sanctions and boycotts to pressure the nuclear powers.

The Ban Treaty certainly reinforces popular understanding of the righteousness of Jeremy Corbyn’s and our movements’ commitments to a nuclear weapons free world. Imagine the global reverberations of Britain, led by Prime Minister Corbyn, deciding not to fund Trident replacement. And, across the channel, if just one or two NATO or other umbrella states are led by their people reject the strictures of their nuclear alliances, they could begin to unravel world’s nuclear architecture and unleash a global disarmament dynamic.

For those of us in the world’s nuclear weapons states, the imperative of resistance remains. This includes doing all that we can to prevent war with North Korea and steadfast education about the human costs, preparations for, and dangers of nuclear war that can be brought on by miscalculation and accident, as well as intentionally. We need to highlight the deceit and deficiencies of “deterrence,” and teach about the forces that led to and won the ban treaty.

But good ideas and truth rarely prevail on their own. Frederick Douglass, the 19th century U.S. anti-slavery abolitionist, was right: “Power concedes nothing without a demand. It never did and it never will.”

More recently, on the eve of the 2010 Nuclear Nonproliferation Treaty Review Conference, then U.N. Secretary General Ban Ki-moon advised that governments alone will not deliver us into a nuclear weapons-free world. We can only reach that promised land with massive popular pressure from below, from international civil society.

For the moment, our best near-term hope may lie in Jeremy Corbyn and the possible Scottish succession from what was once Great Britain. Corbyn has said he will not push the nuclear button, and he has long opposed nuclear weapons and understands the need to invest in social uplift.

The loss of the Faslane on the Scottish coast could leave London without a nuclear weapons base. What the British movement does will thus be critical for human survival and to our struggles in the other nuclear weapons and umbrella states.

ICAN is not the first advocate of a nuclear weapons-free world to receive Nobel Peace Laureate. It was proceeded by the Quaker American Friends Service Committee which protested the A-bombings of Hiroshima and Nagasaki within days of the nuclear attacks; by Joseph Rotblat, the only Manhattan Project senior scientist who resigned because of his moral considerations, and by Mohamed ElBaradei of the IAEA who denounced nuclear double standards.

Years ago, speaking in Hiroshima, Robblat cut to the quick when he said that humanity faces a stark choice. We can either eliminate nuclear weapons, or we will see their global proliferation and the nuclear wars that will follow. Why? Because no nation will tolerate what it experiences as an unjust hierarchy of power, in this case nuclear terror.

*Dr. Joseph Gerson is author of Empire and the Bomb: How the US Uses Nuclear Weapons to Dominate the World, and With Hiroshima Eyes: Atomic War, Nuclear Extortion and Moral Imagination.