US Withdrawal from UNESCO: Abandonment of Principles

Anuradha Mittal* is the Executive Director of the Oakland Institute, a leading US policy think tank.

OAKLAND, CALIFORNIA, Oct 18 2017 (IPS) - A woman shopkeeper is standing on a plastic chair to avoid knee high swirling rainwater mixed with sewage. “I work with a women’s cooperative selling products made by Palestinian women in my shop. The sewage water has gone into the electric wires, so I have no electricity. Everything in the shop is destroyed. The metal door [that was] installed to protect the settlers prevents the water from flowing out into the main drain. . . . This means we suffer every time it rains. They [the settlers] want us to move from here. This is why they make our life hard,” she cries. 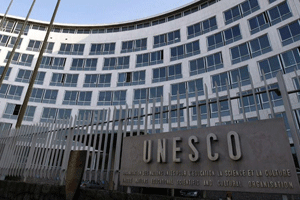 The silent rain accompanies wails of those impacted.

This is the Old City of Hebron – the largest city in the West Bank and the only city in the Occupied Palestinian Territory apart from Jerusalem, with illegal settlements inside the city. As the sewage water in the market rises, Palestinian shopkeepers and residents point out the holes in the gate to allow for water to go through. However, cement blocks and sand placed by the settlers have closed the water drainage.

I am reminded of my time in Hebron, with last week’s announcement of US withdrawal from UNESCO, the Paris-based cultural, scientific, and educational organization of the United Nations, accusing it of “anti-Israel bias.” Israeli Prime Minister Benjamin Netanyahu soon followed, tweeting, “I welcome @realDonaldTrump’s decision … I have instructed the Foreign Ministry to prepare Israel’s withdrawal from Unesco in parallel with the United States.”

Under Obama administration, United States took similar action in 2012 after Palestine was accepted as a member state of UNESCO. A law from the 1990s apparently prohibits U.S. funding for any U.N. agency that recognizes Palestine as a state.

The recent U.S. pull out has to do with UNESCO’s designation of Hebron’s Old City as Palestinian World Heritage site in danger in July 2017. Condemning the decision, Prime Minister Netanyahu announced an annual $1 million cut in membership fees to the United Nations, diverting those funds to a Jewish People’s Heritage Museum in the Kiryat Arba settlement in Hebron.

Israel’s UNESCO ambassador, Carmel Shama-Hacohen, response was to disdainfully take out his mobile phone and share with the UN members, “It’s my plumber in my apartment in Paris. There is a huge problem in my toilet and it is much more important than the decision you just adopted.”

The UNESCO’s decision was a verdict against the occupation. Following the 1994 riots that erupted in Hebron after an American Jewish settler killed 29 Palestinians in a massacre at the Ibrahimi Mosque, Palestinians in the Old City have been living a collective punishment – life in a cage.

Today over 100 physical obstacles, including 18 permanently-staffed checkpoints, 14 partial checkpoints, and various permanent blockades, cut the Old City off from the rest of Hebron. The former lively bustle of Shuhada Street, Hebron’s once main commercial strip and home to the wholesale, gold, and vegetable markets, has drowned behind the green shutters of the boarded up shops, abandoned homes, and empty sidewalks.

In 2015, a third of Palestinian homes in the restricted area (1,105 housing units) were abandoned and an estimated 1,600 businesses closed. Several streets, designated for the exclusive use of settlers, restrict Palestinian traffic and, in some streets, even Palestinian pedestrians are banned.

Metal wire mesh and white plastic tarps—littered with garbage and used plastic bottles—form a canopy to prevent Israeli settlers, living in the buildings above, from throwing garbage, dirty dish water, and chemicals down onto Palestinians.

This is everyday life in the Old City of Hebron.

When it comes to Palestine, actions of President Obama and Trump based on a law from over two decades ago, are confusing for the residents of the Old City of Hebron. United States withdraws from the organization it helped establish after World War II to widen access to education and ensure the free flow of ideas, when UNESCO carries out its mandate.