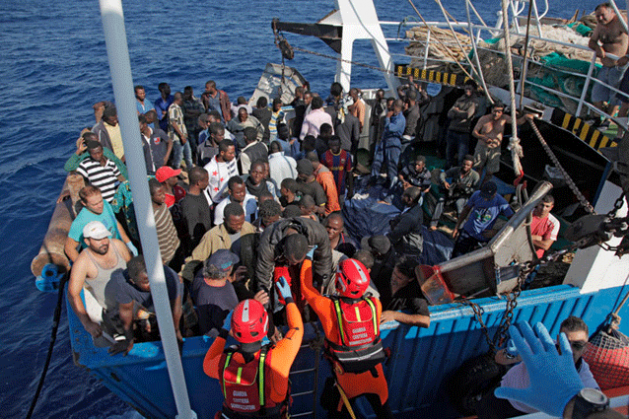 NAIROBI, Kenya, Nov 21 2017 (IPS) - If the thought of a man armed with a rifle and driving with whips a group of African men, women, and children to sell them at a slave market makes you marvel at what kind of greed motivated such revolting barbarity centuries ago, the shocking truth is that we are witnessing a 21st century repeat of that abhorrent practice on African soil.

Kudos to the team from CNN led by International Correspondent, Nima Elbagir, who uncovered a human trafficking ring in Libya which specializes in selling human beings as slaves and sex workers.

For those of us who were at the Durban World Conference Against Racism 16 years ago when slavery and slave trade were declared crimes against humanity, our horror and sadness at reports that sub-Saharan migrants are being sold at slave markets in Libya is immeasurable. That the world would be silent as this heinous crime were reported is something we cannot comprehend and tolerate.

That a people and country that claim African citizenry can practice this repulsion in a continent that bears so many scars is scary at so many levels. For several years now, Libya has continued to serve as the primary departure point for migrants crossing the Mediterranean from North Africa, with more than 90 percent of those crossing the Mediterranean Sea departing from Libya.

Often, migrants to forced labour and forced prostitution through fraudulent recruitment, confiscation of identity and travel documents, withholding or non-payment of wages, and debt bondage.

Reports of auctioneers advertising a group of West African migrants as ‘big strong boys for farm work’, and references to the migrants as ‘merchandise’ indicates a new low, and human rapacity that is difficult to comprehend in the modern age.

It defies at a horrid level international statutes such as The Universal Declaration of Human Rights that prohibits slavery and involuntary servitude as well as the more recent UN Palermo Protocol that made the abolition of modern-day slavery a part of international law.

The conscience of the Libyan nation must be roused; its propriety must be startled. All Libyans must vehemently reject the inhumane practice of slave auctions that will forever blight their history and shred to pieces their relationship with the rest of humanity. I know that the frightened faces of human beings turned into merchandise and put in cages that haunts our collective psyche also affects Libyans of goodwill. Young Africans being held to be sold as slaves in Libya. Credit: SAHARA REPORTERS

The African Union Commission has condemned this trade as an ‘egregious abuse of human rights’ and demanded that the culprits be brought to justice and this violation of fundamental human rights be immediately ended. As Africans we will discuss the slave auctions in Libya at all fora, African and otherwise until we finally and conclusively deal with it.

Horrifying as the situation in Libya is, migration elsewhere in the world continues to be an avenue through which many men, women, and children continue to live in modern-day slavery through the scourge of human trafficking.

Unlike the ages gone by, today’s victims may not be in iron fetters, but most are poverty-stricken and forced to migrate for work, believing it presents an opportunity to change their lives and support their families. It is a desperation that comes with extreme costs in the form of modern slavery.

While everyone must denounce everything that serves to perpetuate slavery, African countries must now begin confronting the factors that force thousands of people to risk their lives seeking a fighting chance for survival abroad through illegal migration.

A report from the United Nations High Commission for Refugees has shown that seven in ten of those heading for Europe are not refugees fleeing war or persecution, but economic migrants in search of better lives.

Africa must give special priority to those SDGs that will give the continent a competitive edge through its youth. These include ending poverty, ensuring healthy lives and ensuring inclusive and equitable quality education, all which have particular resonance with the challenge of empowering youth and making them effective economic citizens.

With between 10 and 12 million Africans joining the African labour force each year and a continent that creates only 3.7 million jobs annually, there is hard work to be done if we are to extirpate the shame of modern slavery.

The UN Secretary General Mr Antonio Guterres remarked, “Slavery has no place in our world and these actions are among the most egregious abuses of human rights and may amount to crimes against humanity”

Like our forefathers who fought against the obdurate slave-drivers of yesteryears, we too must be determined that development priorities are geared towards nipping all circumstances that abet the horrid human trafficking trade.