Tim Wainwright is CEO of WaterAid 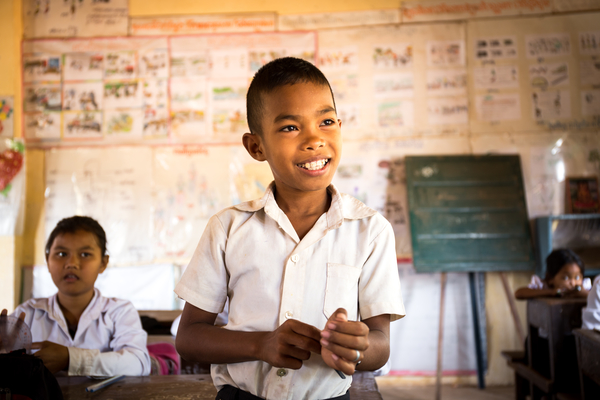 Student, was given hygiene education in school and told his family what he had learnt, Ta Ngi Primary School, Pursat, Cambodia. Credit: WaterAid/ Laura Summerton

LONDON, Nov 6 2017 (IPS) - I started work this morning feeling disillusioned. A report had hit my desk that painted a very bleak picture of the state of the world’s health – and for a moment I was over-whelmed by just how much work there was left to do. Then I regrouped – and began making plans.

The Global Nutrition report revealed that despite all of the hard work that’s gone into improving the world’s health, malnutrition remains a serious problem in almost every nation in the world. Some 815 million people go to bed hungry – almost forty million more than in 2015.

And one in five pre-school age children are under-developed, or stunted, because of malnourishment in the first 1,000 days of their life – that’s 155 million children whose brains and bodies are damaged forever.

In some parts of the world the situation is even more dire. Almost half of India’s youngest children are stunted – the life chances of half of a generation damaged even before their first day at school.

And with 613 million women of child-bearing age worldwide suffering from anaemia, one of the largest causes of birth complications, the cycle of malnutrition seems doomed to repeat itself.

The frustrating truth is that despite all best efforts, we are losing the war against malnutrition. And the reason is very simple – we’re fighting the wrong enemy.
Strange as it sounds, giving people more, or even better, food isn’t always enough to keep them well nourished.

That’s because up to half of the malnutrition faced by the world’s under-nourished people isn’t so just because they lack food. It’s because they suffer from chronic infection and illness, from dirty water, poor sanitation and poor hygiene.

One-third of the world’s population doesn’t have access to a decent private toilet, and another 844 million are without clean water – and so diarrhoeal diseases like cholera are quickly spread. Such diseases are responsible for the deaths of 800 children every single day. However, chronic diarrhoea worm infestations, and other infections, can also prevent the absorption of nutrients from food. Even a full belly cannot protect from malnutrition, if your body can’t absorb the nutrients it’s given.

That’s why the world needs to rethink its approach to malnutrition, because the status quo just isn’t going to get the job done. If we want to ensure children’s futures aren’t damaged before their lives have even really begun, then governments, policy-makers and donors need to stop thinking of malnutrition as something that can be stopped with food alone, and start making clean water and toilets a priority.

Through WaterAid’s work we can identify progress in embracing this way of thinking. As the Global Nutrition Report highlights, in Cambodia, where stunting affects one in three of its youngest residents, the government and their partners are improving access to clean water and toilets and treating water, sanitation and hygiene, nutrition, development and health as inter-related challenges, not as completely separate issues handled by different departments.

If we are to have any chance of meeting the Global Goal to end malnutrition by 2030, and to reach everyone, everywhere with clean water and decent toilets, then others need to adopt this approach, and bolster it with political leadership and funding.

Malnutrition is one of the greatest challenges facing the world today, but it is also an opportunity to do better. Addressing malnutrition while serving those who are hardest to reach with clean water, decent toilets and good hygiene would be among the greatest advancements in modern history.