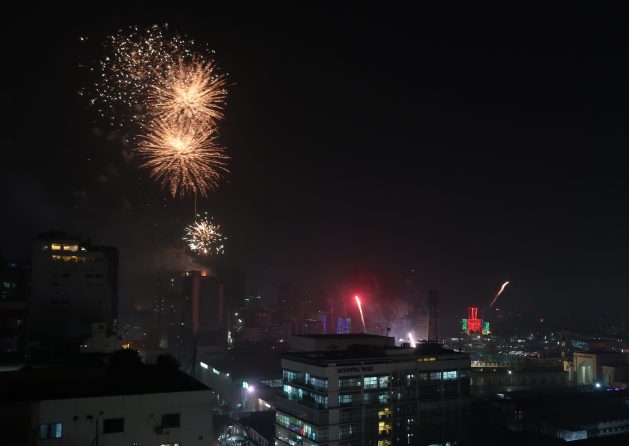 Laser show and fireworks at the Bangabandhu National Stadium in downtown Dhaka on March 22 as part of the celebration marking Bangladesh’s graduation to a developing country. Credit: A.Z.M. Anas/IPS

DHAKA, Mar 27 2018 (IPS) - Bangladesh’s great strides in human development were widely celebrated this month, although they come at the potential cost of Western trade benefits that have helped underpin the nation’s export success for decades.

On March 15, Bangladesh became eligible to graduate from Least Developed Country status after a United Nations policy panel said the South Asian nation met all three criteria for income, human development and vulnerability to shocks. This will likely pave the way for the country’s graduation to a developing nation by 2024, pending reviews.

Next course is ‘not easy’

After graduation, the loss will be most pronounced in the European Union market, where around 98 percent of Bangladesh’s exports enjoy duty-free entry. In the event of preference erosion, this means an additional 8.7 percent tariff in the EU market alone.

Overall, additional tariffs will be 6.7 percent, which will lead to export losses of 2.7 billion dollars, equal to around 8 percent of the country’s annual exports, according to an estimate by the Centre for Policy Dialogue, a Dhaka-based think-tank.

AMA Muhith, Bangladesh’s finance minister, is well aware of the challenging path ahead.

“Once you’re graduated, the next course is not easy,” acknowledged the 85-year-old finance minister in an interview with IPS.

Bangladesh stands to lose the duty-free privileges it enjoyed as a poor country, though the status change will not take effect for six years, he said.

Still, he felt proud and satisfied with Bangladesh’s promotion from a “world beggar to a self-assured country.”

Muhith, who was responsible for mobilising aid for the young nation in the 1970s as a civil servant, said that the graduation is a proper response to those who once mocked Bangladesh as an international “basket case.”

Commerce ministry officials said signing preferential trade agreements with destination countries and negotiating with the EU for GSP plus facility are among the steps the government has been working to counteract the trade shocks.

To prepare for the change, Bangladesh has been borrowing from bilateral partners like Japan and multilaterals such as the Asian Development Bank and the World Bank at higher interest rates.

To implement 10 megaprojects like a seaport in southeastern Matarbari, the government is looking at a combination of concessional and non-concessional loans, Muhith said.

Indeed, foreign aid is an area where Bangladesh has started feeling the heat.

But tackling the challenge is not going to be an easy ride.

The country’s taxation to GDP (gross domestic product) ratio is among the lowest in the world, which is unlikely to improve the situation unless the new VAT legislation is enforced next year. 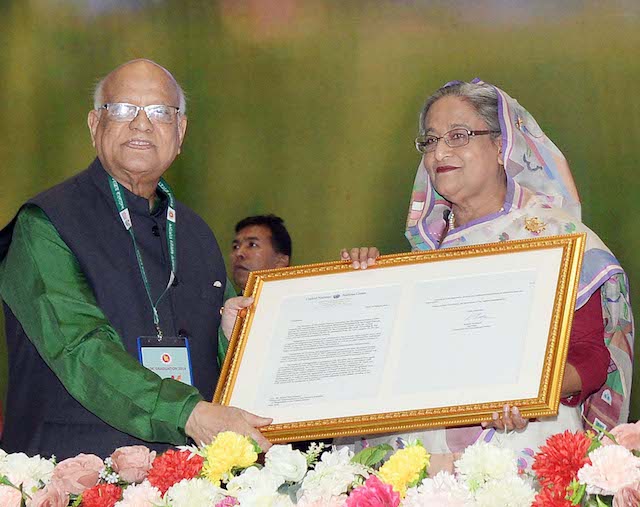 Finance Minister AMA Muhith handed a replica of the UN’s recognition letter to Prime Minister Sheikh Hasina Wazed at a reception accorded to her in the capital. Credit: PID (Press Information Department) Photo

A story of progress

That said, Bangladesh’s socio-economic progress, human development and its economic resilience contributed to improvements in all three indices of the Committee for Development Policy.

Merchandise shipments coupled with money sent home by an estimated 10 million overseas Bangladeshis has left the economy in fine fettle, with economic growth averaging 6.26 percent over the past decade.

And gross income per head reached 1,274 dollars, up from the 1,230-dollar threshold for graduation. By 2015, the country became a lower middle-income country.

And prudent macro-economic management has kept the rate of inflation low—pegged at between 5-6 per cent—even if the rate was once as high as 45 per cent.

Food production has nearly tripled to roughly 40 million tonnes since 1972, a year after the country’s independence.

The country has also achieved self-sufficiency in fish and meat production and Muhith said Bangladesh could emerge as a meat exporting nation in two years.

The middle class, which makes up one-fifth of the country’s population of 160 million, is mostly driving consumption that accounts for 70 percent of the economy.

The beneficiaries of the middle class boom are local and multinational businesses alike.

One winner is American fast food chain Burger King, which broke into the Bangladesh market in late 2016 and now has seven outlets.

“We hope graduation will be expedited. Then we’ll have more business as people’s income will go up,” said Tarique Ekramul Haque, managing director at BanglaCAT, which operates Burger King’s outlets in Bangladesh as a franchisee.

Sustained growth has helped 50 million people leave poverty. The rate of poverty fell from more than 44 percent in the 1990s to 24 percent now, according to the World Bank.

Bangladesh managed to exceed the threshold on human assets index in 2016, propelled by efforts from the government and non-government groups The index includes child and maternal deaths, undernourishment, adult schooling and adult literacy.

The country performed well in reducing its economic vulnerability as well, helped in part by greater export stability and diversification.

Graduation is not all about challenges; it is a matter of opportunities too.

The finance minister is hopeful about getting a “substantial” flow of foreign investment in the post-graduation period.

This graduation will not only widen the market access but ensure access to international financial resources, said Mansur, stressing the optimal use of money in a country where corruption remains endemic.

He hoped that the growth momentum the country achieved will be sustained.

To harness the full potential of graduation, he said the medium-term agenda of the government should be to cut the cost of doing business.

Mansur, a former senior executive of the International Monetary Fund, gave the examples of expensive ports and transportation services, saying costs should be brought down to improve the country’s global business ranking.

He laid emphasis on much broader and faster reforms, saying that infrastructure has to be developed with “right costs” and legal and land reforms need to be accelerated.

In the long-term, he argued that workers’ productivity has to be augmented through massive training and changing the education system.

To Muhith’s mind, the graduation took place thanks in part to the pragmatic policy of reconstruction and development in the post-independence period and able leadership such as prime minister, Sheikh Hasina whom he called one of “the established leaders in the world.”

Indeed, it was a moment of joy for Bangladesh. Between March 20 and 25, the country celebrated the graduation with colourful rallies, service week for citizens by the government agencies, cultural programmes, laser shows and fireworks.

On March 22, Muhith handed out a replica of the UN’s recognition letter to the prime minister at a reception accorded to her in the capital.

Coinciding with the celebration, an international seminar on ‘Bangladesh Graduation from LDC Status: Opportunities and Way Forward’ with top UN officials was organised in Dhaka on March 23.