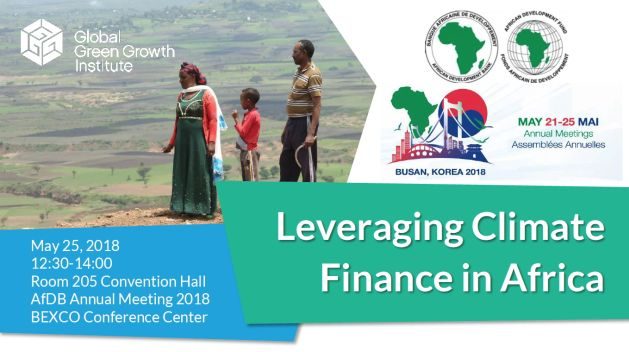 May 17 2018 - What: GGGI, in partnership with the Government of the Federal Democratic Republic of Ethiopia, and the Government of Rwanda will host a side event during the 53rd Annual Meeting of the African Development Bank (AfDB) in Busan, Republic of Korea. The side event will focus on the great strides made by Ethiopia in mobilising financial resources for the Climate Resilient Green Economy (CRGE) initiative to protect the country from the adverse effects of climate change and to build a green economy that will help realise its ambition of reaching middle-income status before 2025.

This official side event will showcase success by the Governments of Ethiopia and Rwanda, as well as GGGI and the AfDB in mobilizing climate finance to build sustainable green growth.

The presentation will highlight:

The potential collaboration opportunities with the AfDB and its members to replicate Ethiopia’s CRGE and Rwanda’s EDPRS2 and GGCRS achievements across Africa.

Where: Busan, Republic of Korea

The government of Ethiopia has set out to achieve ambitious goals for its economy. By 2025 Ethiopia wants to attain middle-income country status. This singular ambition alone promises to lift Ethiopia’s economy out of the list of Lower Income Countries. By so doing Ethiopia will join Cabo Verde and Botswana as countries in Africa whose economies have been graduated into middle-income status. Another African country that has intentions to accelerate its economic growth and follow suit is Angola who is touted to reach the status by 2021.

The attainment of middle income status alone is no guarantee for improved quality of life for citizens. The world bank estimates that 73% of the world’s poor reside in middle-income countries. These countries also contribute one third of the world’s GDP and have historically been the main drivers of global economic growth.

The picture of poverty in Ethiopia is even more grim. In 2016 UNICEF estimated that 13 million Ethiopian children live in poor households, of these 13% live in extreme poverty.

The ambitions shown by Ethiopia to accelerate economic growth show that the country is concerned about the nature of the country’s growth path. The government has identified socially inclusive and sustainable economic growth as the only viable means of improving the lot of its people. The adoption of the Ethiopia’s Climate-Resilient Green Economy(CRGE) is a commitment to include environmental sustainability and mitigation of the adverse effects of climate change into development planning.

GGGI’s work has included support for the Green Economy Strategy, development of a Country Planning Framework fully aligned with the Growth and Transformation Plan II, and advisory support on investment and implementation processes for priorities identified in the CRGE strategy.

GGGI’s specific contributions in support of the  CRGE vision include: the development of Climate Resilient (CR) strategies for the agriculture & forestry and water & energy sectors; development of the GTP II at the federal and sectoral levels; design of g frameworks and sector guidance for integrating the CRGE into the GTP II; design and review of the CRGE Facility’s operational systems; support for  the CRGE Facility to develop and monitor fast track investments; design and implementation of the national and regional capacity development programmes, and; REDD+ readiness.

Ethiopia has achieved important results and mobilized significant finance since CRGE Facility establishment and with GGGI support. Between 2015 and 2016, GGGI supported MoFEC to obtain direct access accreditation to the Adaptation Fund (AF) and the Green Climate Fund (GCF). In 2017, GGGI supported the CRGE Facility in mobilizing USD 60 million grant finance from AF and GCF. GGGI has also supported the CRGE Facility in mobilizing 75 million climate change finance. Most recently, GGGI contributed to the mobilization of USD 330 million of international private sector finance for the Mekele Water Supply Project.

Through the CRGE Facility the Ethiopian government has been able to attract funding for its climate change action initiatives. This financing vehicle has been able to mobilise support from from key financing organisations. Among  the 22 new projects Green Climate Fund  has approved for $1 billion worth of funding $45 is invested to assist Ethiopia’s climate resilience initiatives related to the impact of the drought in the country. This funding is specifically meant to address the disproportionate impact of climate change on women. This  project aimed at gender-responsive resilience in Ethiopia’s most vulnerable communities is anticipated to increase climate resilience for  about 1,3 million people. This is just one example that stands out among many which include about $10 million from the Adaptation Fund.

There are many exciting areas that the African Development Bank has committed itself with regards to climate action in Ethiopia. The first is the alignment of the bank’s $1 billion financing framework for drought stricken countries with some of Ethiopia’s climate resilience strategy projects and the development of similar plans in other countries in sub-Saharan Africa.

Among other exciting areas where the AfDB has an opportunity to make an impactful collaboration other stakeholders is through its Technologies for African Agricultural Transformation initiative. Here there is a wide range of knowledge sharing areas which include working together with the recently operationalised Technology Bank for the Least Developed Countries.  Joint efforts aimed at mobilising investment into green technology for the African continent will help accelerate industrialisation powered by low carbon energy sources.

An  exciting area that has not been explored to its fuller extent is the exploration of the benefits of index insurance for economies largely driven by agriculture.