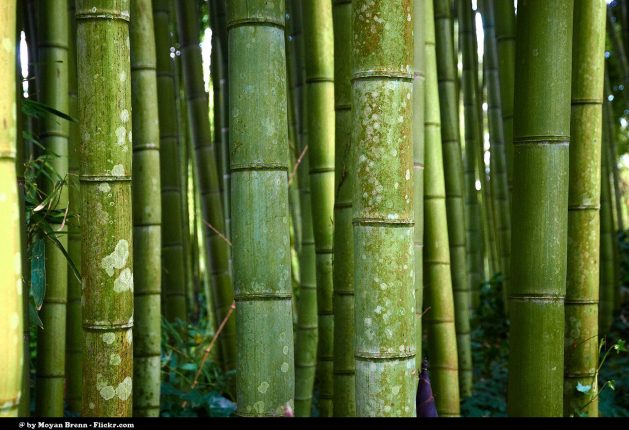 Bamboo is stronger than concrete or steel but is a renewable resource, providing refuge and food for wildlife as well as biomass. Credit: CC by 2.0

VIENNA, Jun 29 2018 (IPS) - A landmark conference bringing more than 1,200 people from across the world together to promote and explain the importance of bamboo and rattan to global sustainable development and tackling climate change has ended with a raft of agreements and project launches.

“Bamboo is not a climate change silver bullet, but we want people to realise that it is a ‘forgotten opportunity’ in helping mitigate the effects of climate change." --INBAR Director General Dr Hans Friedrich

Organisers had pledged to ensure that the event would not be “simply a talking shop”, instead making real progress on raising awareness of the potential role of bamboo and rattan in helping solve major global problems.

As it closed, it appeared that goal had been met with the announcement of a number of agreements, including a major project to develop bamboo sectors across Africa and an agreement between INBAR members to further develop bamboo and rattan sectors in other parts of the world.

Speaking at the end of the conference, INBAR Director General Dr Hans Friedrich said: “We have made some real steps forward for the development of bamboo and rattan.”

Bamboo and rattan have long been championed by environmental organisations and groups promoting sustainable development, especially in the world’s poorest countries.

A grass, bamboo is a native plant on all continents except Antarctica and Europe, although the majority of its natural habitat is in the tropical belts.

It is stronger than concrete or steel but is a renewable resource, providing refuge and food for wildlife as well as biomass. It captures higher amounts of CO2 than most other plants and can be harvested significantly faster than wood – over a period of 20 years it can produce almost 12 times as much material as wood.

It can be used for shelter as well as, in some cases, transport, and provides sustainable, ecologically-friendly economic and commercial opportunities to people, especially in poorer communities.

Groups like INBAR point out that bamboo use can play a significant part in helping countries meet many of the UN’s sustainable development goals.

But awareness of the potential of bamboo and rattan is generally low in many countries, especially in the more developed world and particularly at senior levels of government and industry.

Dr Friedrich told IPS: “A large part of the reason for this conference is about awareness. We want to tell people who don’t yet realise it that bamboo and rattan can help them reach their sustainable development goals.

“The potential is immense. It is understood by people in, for example, the forestry industry, and others, but not really by politicians. At this conference we want to help them realise this by giving them examples.”

Bringing together ministers, industry leaders, scientists and entrepreneurs, the conference used examples of innovative bamboo use – from a thirty-foot bamboo wind turbine blade to bamboo diapers – and real-life stories from individuals of bamboo and rattan helping create sustainable livelihoods to underline to decision-makers and senior industry figures the potential.

One of the key aims of the meeting, said organisers, was to try and push those decision-makers into setting up the institutional, regulatory, policy, and business frameworks necessary to kick-start a new sustainable development paradigm.

“In the last few years I have met a number of ministers and they always start off being sceptical about bamboo but after they see everything they realise its potential.

“We want governments to think about bamboo when they think about their plans for climate change, sustainable development and green policies,” Dr Friedrich told IPS.

INBAR also used the conference to talk to representatives from large private sector firms about how to build global value chains, as well as how to set up international standards which support international bamboo and rattan trade.

Its proponents have pointed out the economic potential, particularly in poorer countries, of the bamboo industry. In China, which Dr Friedrich says has until now been the “only country taking bamboo really seriously [as an industry]”, the bamboo industry employs 10 million people and is valued at USD 30 billion per year.

“People are beginning to realise the economic potential and opportunities for bamboo,” Friedrich told IPS.

The conference also highlighted the impact bamboo and rattan could have on climate change.

Speakers from various countries, including politicians, spoke about how bamboo and rattan was being used to help combat the effects of climate change and help the environment.

Experts outlined its potential and current use in areas like forest protection, restoration of degraded land, and carbon capture as well as a replacement for more carbon-intensive materials such as cement and steel in construction and industry.

An INBAR report released ahead of the conference gave an analysis of the carbon which is saved by substituting more emissions-intensive products for bamboo. It found the carbon emissions reduction potential of a managed giant bamboo species forest is potentially significantly higher than for certain types of trees under the same conditions.

Combining bamboo’s potential displacement factor with bamboo’s carbon storage rate, bamboo can sequester enormous sums of CO2 – from 200 to almost 400 tonnes of carbon per hectare. In China alone, the plant is projected to store more than one million tons of carbon by 2050.

Bamboo can also be used in durable products, including furniture, flooring, housing and pipes, replacing emissions-intensive materials including timber, plastics, cement and metals.
It can also be used as a substitute for fossil fuel-based energy sources – research by INBAR has shown that substituting electricity from the Chinese grid with electricity from bamboo gasification would reduce CO2 emissions by almost 7 tonnes of CO2 per year.

Bamboo can also help communities adapt to the effects of climate change, serving as a strong but flexible building material for shelter, as well as helping restore degraded land and combat desertification.

Patricia Espinosa, the Executive Secretary of the United Nations Framework Convention on Climate Change (UNFCCC), said at the conference: “In short, bamboo and rattan represent an important part of reducing net emissions. And this is exactly what the world needs right now.”

Speaking to IPS on the eve of the conference, Dr Friedrich said he hoped that policymakers would realise the potential for bamboo as part of solutions for dealing with climate change.

“Bamboo is not a climate change silver bullet, but we want people to realise that it is a ‘forgotten opportunity’ in helping mitigate the effects of climate change,” he said.

INBAR officials readily admit that it is likely to take time to raise awareness of the potential of bamboo and rattan, but they are encouraged by the fact that more countries are starting to look at it seriously as an industry, including in Africa and South America.

But Dr Friedrich was keen to stress that the conference was just a beginning and that, with international agreements on important projects being signed, he was hopeful of real change in the future use and awareness of the potential of bamboo and rattan.

“I hope this conference is going to be a landmark moment. I want it to be the catalyst and inspiration for real change,” he told IPS.