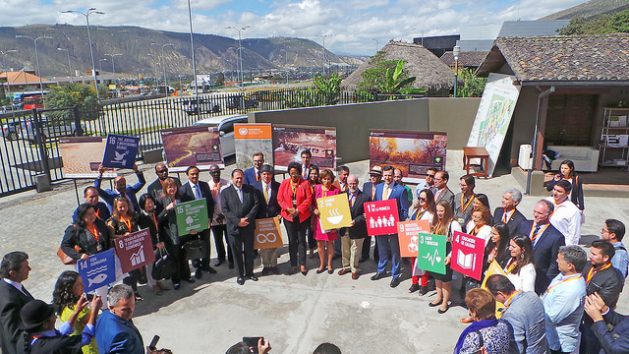 MIDDLE OF THE WORLD CITY, Ecuador, Jun 18 2018 (IPS) - Sustainable land management (SLM) and conservation are the recipes that with different ingredients represent the basis for combating soil degradation, participants in the event to celebrate the World Day to Combat Desertification (WDCD)agreed on Jun. 17 in Ecuador.

Under the theme “Land has true value. Invest in it,” a Latin American country hosted for the first time the celebration of the World Day, in the Middle of the World City, Ecuador, a country that stands out for sustainable soil management initiatives.

The WDCD’s slogan for 2018, in fact, is linked to Ecuador’s proposal to recover the concept of the bioeconomy, in the sense that “there cannot be unlimited extraction; there must be a commitment to preservation and to sustainable land management,” the United Nations Convention to Combat Desertification (UNCCD) coordinator for Latin America and the Caribbean, José Miguel Torrico, told IPS.

"The role of women in land sustainability is key, since women are in the majority among peasant farmers in Asia and Africa, according to 2017 data, so they should be provided training, technology, and information." -- Tarja Halonen

The conference, held symbolically in the Middle of the World City, some 25 km from the centre of Quito, was led by the UNCCD deputy executive secretary, Pradeep Monga.

Everything that is produced and consumed in the world uses resources that come from the earth, he said, citing the example that 10 square metres of land are needed to make a bicycle. “There is a footprint on the earth that we cannot quantify,” he warned.

The UNCCD goodwill ambassador and former president of Finland (2000-2012), Tarja Halonen, presented an estimate of the impact on the economy, pointing out that “desertification affects our countries by about nine percent of the GDP, which amounts to 23 trillion dollars annually.”

Halonen also stressed that it is essential for a gender perspective to be incorporated in the fight against desertification.

“The role of women in land sustainability is key, since women are in the majority among peasant farmers in Asia and Africa, according to 2017 data, so they should be provided training, technology, and information,” she said.

Joao Campari, Global Leader of Food Practices in the Worldwide Fund for Nature (WWF), said “We are consuming too much,”, referring to the elements that put pressure on soils and drives degradation.

“Forty percent of food is thrown away every day; in some countries of the world more is consumed than is needed, and in others, there is nothing to eat,” so there is a need to reduce pressure on ecosystems, he said.

For his part, John Preissing, representative in Ecuador of the United Nations Food and Agriculture Organisation (FAO), said that combating land desertification is closely linked to the fight against hunger. 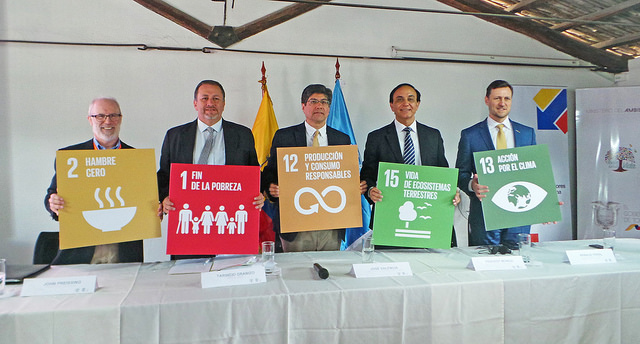 That is why it is necessary to make progress, for example, towards “smart livestock farming, one of the main causes of degradation, but at the same time one of the main sources of food.”

One of the hosts of the WDCD celebration, Ecuador’s Environment Minister Tarsicio Granizo, stressed that soil degradation “is not only an environmental problem; it is a problem that has to do with food sovereignty and security.”

Granizo recalled that Ecuador, like other Latin American countries and other developing regions of the South, is facing a bleak situation, because “it is estimated that 47 percent of the soils are suffering from degradation problems and 20 percent are seriously desertified.”

But, as was commented during the colloquium, Ecuador stands out for its proposals to address the problem, such as the BioEcuador initiative, which incorporates sustainable land management through the bioeconomy, and the Integrated Management Plan to Combat Desertification, Land Degradation and Adaptation to Climate Change.

These projects, said the local minister of Foreign Affairs and Human Mobility, José Valencia, are some of the credentials with which the country demonstrates its determination in favour of sustainable development.

Valencia also pointed out, “as a sign of political will, the fact that 110 countries have established national targets to combat desertification, whose impacts affect human beings, biodiversity and ecosystem services,” within the 2030 Agenda of Sustainable Development Goals (SDGs).

During the colloquium it was stressed that reducing soil degradation is a cross-cutting target in several of the 17 SDGs.

Torrico, meanwhile, underscored that in terms of human mobility, desertification generates different consequences in the regions of the South.

In Latin America and the Caribbean, countries are facing problems of population displacement within their borders, while in Africa, the continent with the greatest desertification, the phenomenon has generated the most severe problems of poverty and forced emigration, he explained.

With respect to the setting of measures, the UNCCD regional coordinator cited that “in Latin America there is an important initiative, the 20/20; to recover 20 million degraded or deforested hectares by the year 2020.”

“All the countries in Latin America and around the world are assessing their problems (of degradation), the locations and how they can solve them, which has enabled them to set concrete goals,” he said.

Several ministers from Caribbean countries participated in the events of the WDCD, as well as delegates from European and Latin American governments and representatives of environmental and social organisations.

Ecuadorian minister Granizo considered that the South-South exchange is an element that should be added to the fight against desertification. “There are local experiences that have been successful in some countries, that could work in others, but they remain limited to local experiences,” he explained.

The participants warned that efforts to neutralise degradation must be accelerated. If not enough progress has been made by 2050, “50 percent of the land will be in the process of degradation and there will be a decrease in food between 15 and 20 percent,” said Torrico.