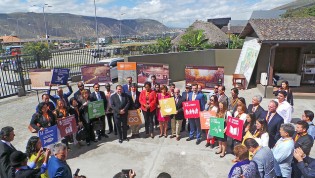 By Ela Zambrano
Sustainable land management (SLM) and conservation are the recipes that with different ingredients represent the basis for combating soil degradation, participants in the event to celebrate the World Day to Combat Desertification (WDCD)agreed on Jun. 17 in Ecuador.

By Kanya D'Almeida
Try to imagine an expanse of barren land, stretching for miles, with no trace of greenery, not a single bough to cast a sliver of shade, or a trickle of water to moisten the parched earth. Now imagine that desert expanding by 12 million hectares a year. Why? Because it’s already happening.
ADVERTISEMENT ADVERTISEMENT