Hardeep S. Puri, India’s Minister of State for Housing & Urban Affairs, in his address to the UN’s High-Level Political Forum on Sustainable Development

UNITED NATIONS, Jul 19 2018 (IPS) - It is with great pleasure and pride that I interact with you this afternoon as India’s Minister of Housing and Urban Affairs, to share some thoughts on India’s extremely ambitious, and arguably the world’s largest planned urbanization programme under the leadership of our Prime Minister, Narendra Modi. 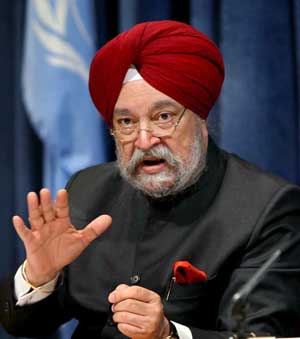 By 2030, when we complete work of the 2030 Development Agenda, nearly 600 million Indians, or 40% of our population, will reside in urban spaces. To lay further emphasis on India’s urban prospects – from now till 2030, India has to build 700 to 900 million square meters of urban space every year.

In other words, India will have to build a new Chicago every year from now till 2030 to meet its urban demand. More importantly, the new urban infrastructure India builds for 2030, 70% of which still needs to be constructed, will have to be green and resilient.

India has been in the vanguard of the sustainable development agenda even prior to 2015. By promoting cooperative federalism, ensuring integrated planning through convergence, and focusing on an outcome-based approach compared to a project-based approach, we have embarked upon the most ambitious and comprehensive programme of planned urbanisation ever undertaken in the world.

With these principles as the backbone, India is implementing some of the world’s largest and most ambitious national schemes for social inclusion, economic growth, and environmental sustainability, through silo-breaking approaches.

In the words of Prime Minister Modi at the UN summit for post-2015 development agenda, “Just as our vision behind Agenda 2030 is lofty, our goals are comprehensive. It gives priority to the problems that have endured through the past decades. And, it reflects our evolving understanding of the social, economic and environmental linkages that define our lives”.

India has consistently achieved a growth rate of over 7% year on year through bold economic reforms, and has strong prospects for an even higher growth rate in the near future. Given our size and scale, India is fast becoming a pillar of global growth and stability.

As President of the Governing Council of UN-Habitat, it gives me great pleasure to note international efforts towards inclusive, resilient, and sustainable human settlements and SDG 11 have been greatly strengthened in the last few years by the New Urban Agenda signed at Habitat III, the Sendai Framework for Disaster Risk Reduction and the Quito Declaration on Sustainable Cities and Human Settlements.

Today, more than 90% of the global urban growth is occurring in the developing world. India, China, and Nigeria together will account for 35 % of the growth in the world’s urban population between 2018 and 2050. It would not be an overstatement to say that India’s urban agenda will constitute one of the defining projects of the 21st century.

Urban areas in India face multi-pronged challenges. We remain confronted by a complex ecosystem of urban challenges through and in ensuring housing for all, technology based solutions to enhance service delivery, better mobility and greener transport, smart governance, and in doing more with less.

Mahatma Gandhi had famously said, “Freedom from insanitary practices is even more important than political freedom”.

As a tribute to the father of the nation, India launched the largest sanitation and hygiene program in the world – the Swachh Bharat Mission, with the objective of make India open defecation free and achieve scientific waste management by October 2nd 2019, the 150th birth anniversary of the Mahatma, well ahead of the deadline for SDG 6.

The Atal Mission for Rejuvenation and Urban Transformation (AMRUT) and the National Rural Drinking Water Program (NRDWP) seek to provide urban and rural areas with universal drinking water supply and sewage treatment respectively. Both these missions have been making steady progress and are on track to achieve their goals.

The Pradhan Mantri Awas Yojana or the Prime Minister’s scheme on Affordable Housing for All is the world’s largest housing programme for the poor. The government aims to build 11 million affordable homes for urban Indians by the year 2022.

We have already sanctioned over 5 million and are confident of meeting the targets by middle of 2019. Giving a fillip to gender empowerment, the title of each home under the Mission is under the lady of the house, or co-jointly.

This not only addresses SDG 11 directly but also aims to effectuate, SDG 1 by ending spatial poverty of homeless people; SDG 3 by giving access to all-weather protected living environment; SDG 7 through increased usage of sustainable, affordable construction practices; and SDG 10 by reducing inequalities of access to basic minimum standard of living.

India is in the process of creating 100 Smart Cities to strengthen urban infrastructure by applying smart solutions and giving a decent quality of life to citizens. Improving the urban governance reforms through creation of Integrated Command and Control Centre has made city management efficient and effective resulting in savings of city revenues.

This has made a significant impact on India’s promise to create inclusive and sustainable cities under the SDG 11 by building institutional capabilities through efficient administrative processes and strengthening grassroots democracy.

Smart Cities Mission also focuses on SDG 12 by reducing the pressure on resources through promotion of sustainable consumption and production pattern which again is promoted by sustainable practices being adopted by cities in reducing the carbon footprint, leveraging vertical expansion and reducing the overall burden on infrastructural resources by switching to cleaner substitutes.

India has ensured that all its international commitments are mirrored in the national development goals. With India striving to meet its national socio-economic development targets, achieving the 17 Sustainable Development Goals (SDGs) and the 169 targets linked to them will be a major success story of the millennium affecting more than a billion persons all at once.

India’s national development goals and its “Sab Ka Saath, Sab Ka Vikas” or “development with all, and for all,” policy initiatives for inclusive development converge well with the SDGs, and India will play a leading role in determining the success of the SDGs, globally.

As Prime Minister Narendra Modi noted, “The sustainable development of one-sixth of humanity will be of great consequence to the world and our beautiful planet.” India stands truly committed to achieving an equitable and sustainable future for all its citizens, and in working with the global community to achieve the SDGs together.