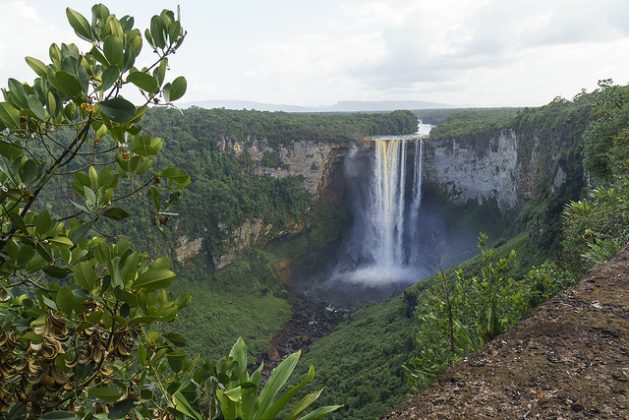 Kaieteur Falls, Guyana. Guyanese farmers have been reporting salt water intrusion for a number of years. This especially happens during periods of drought and in those regions where irrigation water is sourced from rivers and creeks which drain into the Atlantic Ocean. Courtesy: Dan Sloan/CC By 2.0

PORT-OF-SPAIN, Aug 14 2018 (IPS) - Mikesh Ram would watch his rice crops begin to rot during the dry season in Guyana, because salt water from the nearby Atlantic Ocean was displacing freshwater from the Mahaica River he and other farmers used to flood their rice paddies.

The intrusion of salt water into the rice paddies had been happening off and on for the past 10 years, and he, like many other rice farmers in Regions 4 and 5 of Mahaica, Guyana, had sustained periodic financial losses due to the ocean overtopping the 200-year-old sea walls erected as barricades to the sea. And while 2015 was an unusually good year for Guyana’s rice harvest, the following year, 2016, saw a 16 percent drop in production.

Though the fall-off in production that year could not entirely be attributed to the salt water intrusion, expert sources say this was part of the problem. The United States Department of Agriculture Foreign Agricultural Service’s Commodity Intelligence Report notes that reduced rice production “was due to myriad problems including drought, water rationing, salt water intrusion, lack of crop rotation, less fertiliser input, and slower and lower returns to farmers.” It added that for the first rice crop of 2016, “about 20 percent was affected by drought and another 15 percent had salt water intrusion on fields.”

“The knowledge of the [agricultural] extension officers in mitigating and adapting to the salt water intrusion is questionable, however, but a real education and awareness campaign should start with these officers who interact with farmers more frequently.” -- Heetasmin Singh

The rice-growing regions of Demerara-Mahaica and Berbice-Mahaica are particularly vulnerable to the impacts of climate change, located as they are six feet below sea level on Guyana’s Atlantic north coast.

Heetasmin Singh, who completed a master’s degree at the University of Guyana, presented a paper on the subject at the just concluded Latin America and Caribbean Congress for Conservation Biology, held Jul. 25-27 at the St. Augustine campus of the University of the West Indies, Trinidad. Following her presentation, she told IPS via e-mail of some of the concerns farmers in the region have.

She said, “Farmers have been reporting salt water intrusion for a number of years, maybe as much as 10 years (or more) in certain regions of the country. This especially happens during periods of drought and in those regions where irrigation water is sourced from rivers and creeks which drain into the Atlantic Ocean (as opposed to a water conservancy or catchment)… the salt water intrusion is not just a threat, it is a reality for many of them.”

Farmer Mikesh’s son, Mark Ram, is a colleague of Singh as well as a scientific officer at the Centre for the Study of Biological Diversity at the University of Guyana. He told IPS that salt water intrusion normally occurs during the dry season when there is less fresh water because the rains have not fallen. He said the salinity had one of two effects on growing rice plants: it could either kill them or slow down their rate of growth,

“Usually, [salt water] affects the plant when they have just been planted because…we are required to flood the fields. So what we would do, we usually wait until it rains a bit, then flood the fields and add fertiliser. Then we release the water and then try to flood it again. It is at this time [when] the water becomes saline because the rain has not fallen that it affects the crop, it kills out the rice fields.” On the other hand, he said, “it can delay harvesting time because the rice is not going to grow as fast as it should.”

Sometimes, he said, “there is actual rotting of the plant” due to the water’s salinity.

To counteract the problems caused by salt water intrusion, farmers in the Mahaica region rely on fresh water supplies from the National Drainage and Irrigation Authority. According to the USDA Commodity Intelligence Report, Guyana is “divided into water conservancy regions, [and] has developed an irrigation and dike infrastructure to help farmers use supplemental irrigation from reservoirs while protecting areas through levees from unseasonably heavy rains which could flood or erode land. To help the agricultural sector, starting in January 2016, Guyana’s National Drainage and Irrigation Authority (NDIA) water authorities begin pumping available water into the drier conservancies.”

“Farmers ask the NDIA to release some of the fresh water from the major reservoirs,” Ram said.  “Once they receive this it reduces the salinity so that the water becomes usable.” However, no other adaptation or mitigation measures had so far been implemented by farmers, he said.

Singh noted via e-mail that “the knowledge of the [agricultural] extension officers in mitigating and adapting to the salt water intrusion is questionable, however, but a real education and awareness campaign should start with these officers who interact with farmers more frequently.”

She added, “Many farmers I interviewed saw the effects of the soil salinisation on their crops but many were not familiar with the term climate change or were not adapting best practices for ameliorating soil salinisation. They instead sought to solve their low crop yields issues with more fertilisers which would end up doing more harm than good for the crops.”

However, she notes that some will flush their fields and allow water and the salts to percolate through and past the root zone of the crops. Others will ensure their soils are deep ploughed to ensure faster percolation of salts past their crop root zone. With sea level rises for Guyana projected to rise anywhere from 14 cm to 5.94 metres in 2031; from 21 cm to 6.02 metres in 2051; and from 25 cm to 6.19 metres in 2071, the need for proactive adaptation and mitigation measures becomes ever more urgent.