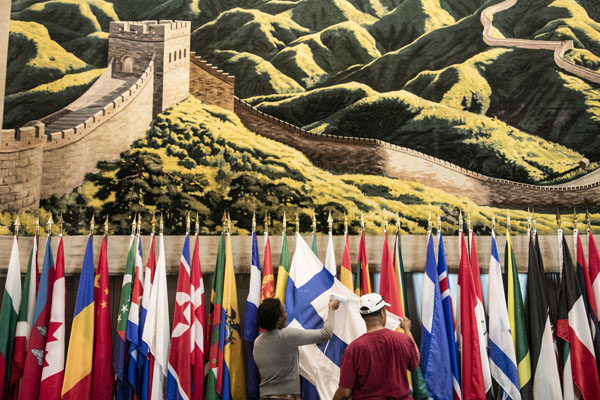 Sep 25 2018 - The United Nations General Assembly (UNGA)’s 73rd session will run from September 2018 to September 2019. Its high-level segment, which started on 24 September 2018, will be a key defining moment for the UN’s 193 Member States to engage in debates towards cooperative responses to many urgent and complex global issues of today, such as peace, gender equality and sustainable development.

Most importantly, this year we are closer than ever to a joint response for one of the greatest political challenges of our era: migration.

This session will see the adoption of the Global Compact for Safe, Orderly and Regular Migration (GCM), the first intergovernmental agreement to cover all dimensions of international migration in a holistic and comprehensive manner.

With its universal membership the General Assembly, established in 1945, is the most representative international body and the pre-eminent deliberative, policy-making and representative organ of the UN. The Assembly’s decisions carry the weight of world’s opinions on the full spectrum of international political issues as expressed in resolutions, and largely affect the year-round work of the UN in its six main committees. In early October, the work of the 73rd UNGA’s main committees will kick off. 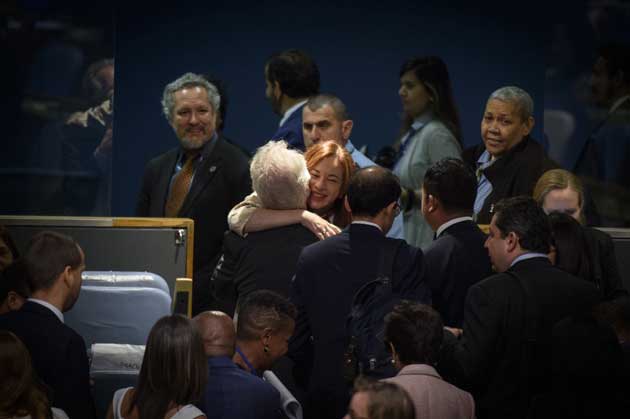 The opening of the 73rd UNGA is noteworthy for several reasons.

First, having a female President of the General Assembly (PGA) for only the fourth time and the first time in more than a decade.

In June 2018 María Fernanda Espinosa Garcés, the Minister of Foreign Affairs and Human Mobility from Ecuador was elected as only the fourth woman in history to hold the PGA position of PGA. Garcés hopes she can contribute to the progress towards gender parity and be a positive influence for “all the women in the world who participate in politics today and who face political and media attacks marked by machismo and discrimination.” She is also the first woman from Latin America and the Caribbean to preside over the Assembly.

Garcés put ensuring the success of the intergovernmental conference to adopt the GCM at the top of her agenda. “We must keep our commitment with migrants all over the world. We are building an agreement and it is our responsibility to finalize our work,” she noted in her visionary statement for the election and as one of the seven key priorities listed in her speech at the opening of the 73rd UNGA.

In addition to the GCM, she will have the task of continuing the important work of the General Assembly on other issues, namely, supporting the UN reform process, implementing the Sustainable Development Goals (SDGs), combatting climate change, furthering financing for development, as well as empowering women and girls, among others. 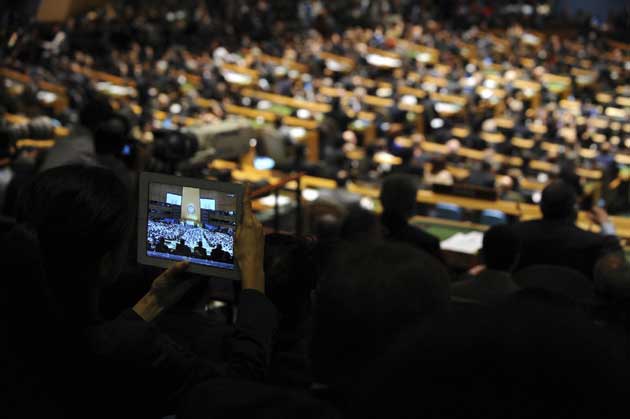 A delegate captures a photo of the General Assembly Hall during the statement by United States President Barack Obama at the general debate of the Assembly’s 67th session. UN Photo/Jennifer S Altman

Second, a continued theme of the 73rd General Debate to ensure the work of the UN remains focused on the people it was intended to serve.

The 73rd General Debate begins on 25 September 2018 for approximately nine days. 196 participants will take to the lectern, among them 95 Heads of State and 42 Heads of Government.

The President of the General Assembly has chosen the theme of General Debate as follows: “Making the United Nations relevant to all people: Global leadership and shared responsibilities for peaceful, equitable and sustainable societies”. This also represents continuity for the General Assembly itself, as “focusing on people” was the 72nd President Miroslav Lajčák’s theme. Lajčák expects the successor will continue with a number of things he launched, and stated that “ [as] with many good things accomplished, it is still a work in progress.” 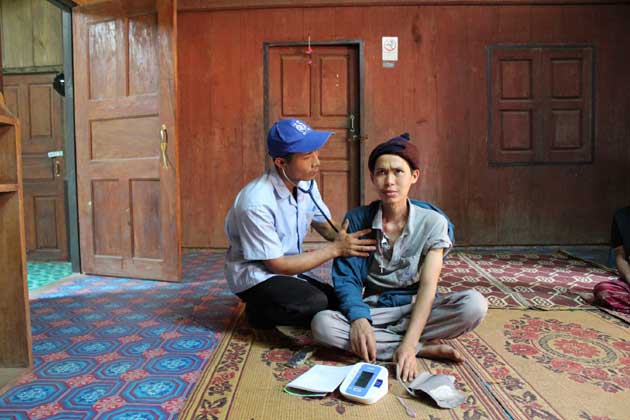 Third, global health is to take central stage, opening up the potential for IOM to further progress in advancing the migration health agenda.

Global health has received significant attention as governments have advanced preparations for three high-level meetings; two of them will take place during the 73rd session. The themes of the three meeting pointed to the accelerated progress of SDG 3, ensuring healthy lives and promoting well-being for all.

The General Assembly’s first-ever high-level meeting on tuberculosis (TB) aims to accelerate efforts to end TB and reach all affected people with prevention and care, and will be convened on 26 September. During an interactive hearing in early June, the UN Secretary-General Antonio Guterres highlighted that social drivers of the disease include poverty, inequality and increasing rates of migration. A draft political declaration was placed, mentioning the prioritization of high-risk groups as well as other people in vulnerable situations such as migrants, refugees and internally displaced people.

The following day, on 27 September, the General Assembly will convene the first comprehensive review of the prevention and control of non-communicable diseases (NCDs) since the adoption of the SDGs in 2015.

This session will also feature preparation of the high-level meeting on Universal Health Coverage (UHC) scheduled for 26 September 2019. Reaching UHC means that people and communities will receive health services without undergoing financial hardship. The inclusion of UHC as SDG target 3.8, including financial risk protection and access to quality healthcare, medicines and vaccines, cemented its position as a global health policy priority. UHC also reaffirmed the 2030 Agenda’s commitment to “leave no one behind”, which would only be possible through the inclusion of migrants.

As the 73rd session of the General Assembly gets underway, it is IOM’s hope that these discussions and Member State negotiations can highlight the many benefits that migrants bring to their new communities; can tackle the drivers or irregular and forced migration; and can move towards tangible results that bring change to society and to people’s lives.

The article was prepared by Xin Guo, Migration Policy Officer at IOM’s Office to the United Nations.