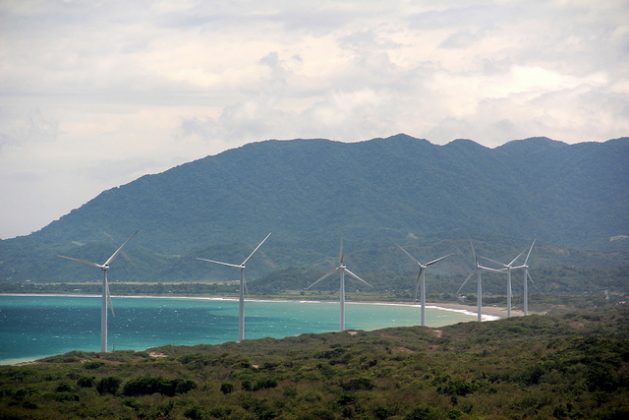 The Bangui Wind Farm located in the northern Philippines hosts 20 wind turbines with a capacity of 33 megawatts. GGGI works mainly with governments that express an interest in sustainable growth and is supporting the Philippines in mainstreaming green growth into the country’s development planning. Credit: Kara Santos/IPS

Dr. Frank Rijsberman has been the director general of the institute since 2016, and for him, green growth is no longer a matter of morality, but of economics. Renewable energies are now cheaper than fossil fuels. They create employment, do not pollute and provide countries with the amount of energy they need. Last week he joined several side events at the 73rd session of the United Nations General Assembly in New York.

GGGI is an intergovernmental organisation that works with over 60 countries. It seeks commitments among governments and private companies to switch to green growth—economic growth that takes into account environmental sustainability.

The organisation, based in Seoul, South Korea, works mainly with governments that express an interest in sustainable growth. Its work does not directly depend on changes in administrations.

Under Rijsberman, GGGI has consulted with Colombia on their protection of the Amazon rainforest, the United Arab Emirates on how to diversify its economy, and more recently with New Zealand. Rijsberman is especially proud of the organisation’s work in Ethiopia and Rwanda, with its president Paul Kagame, who he considers a “champion of green growth”.

Rijsberman is not only very knowledgeable, he also calls his job “his passion”. When he describes GGGI’s presence worldwide, he jumps from Australia to Ethiopia, from South Korea to Mexico, and from Norway to the Philippines.

He talks slowly, like a teacher giving his first class, or a father trying to get his point through. And when he talks about GGGI’s achievements, he smiles in the affable way most Dutch people do. His excitement is justified: renewable energies are the present. And public opinion cares. Excerpts of the interview follow: 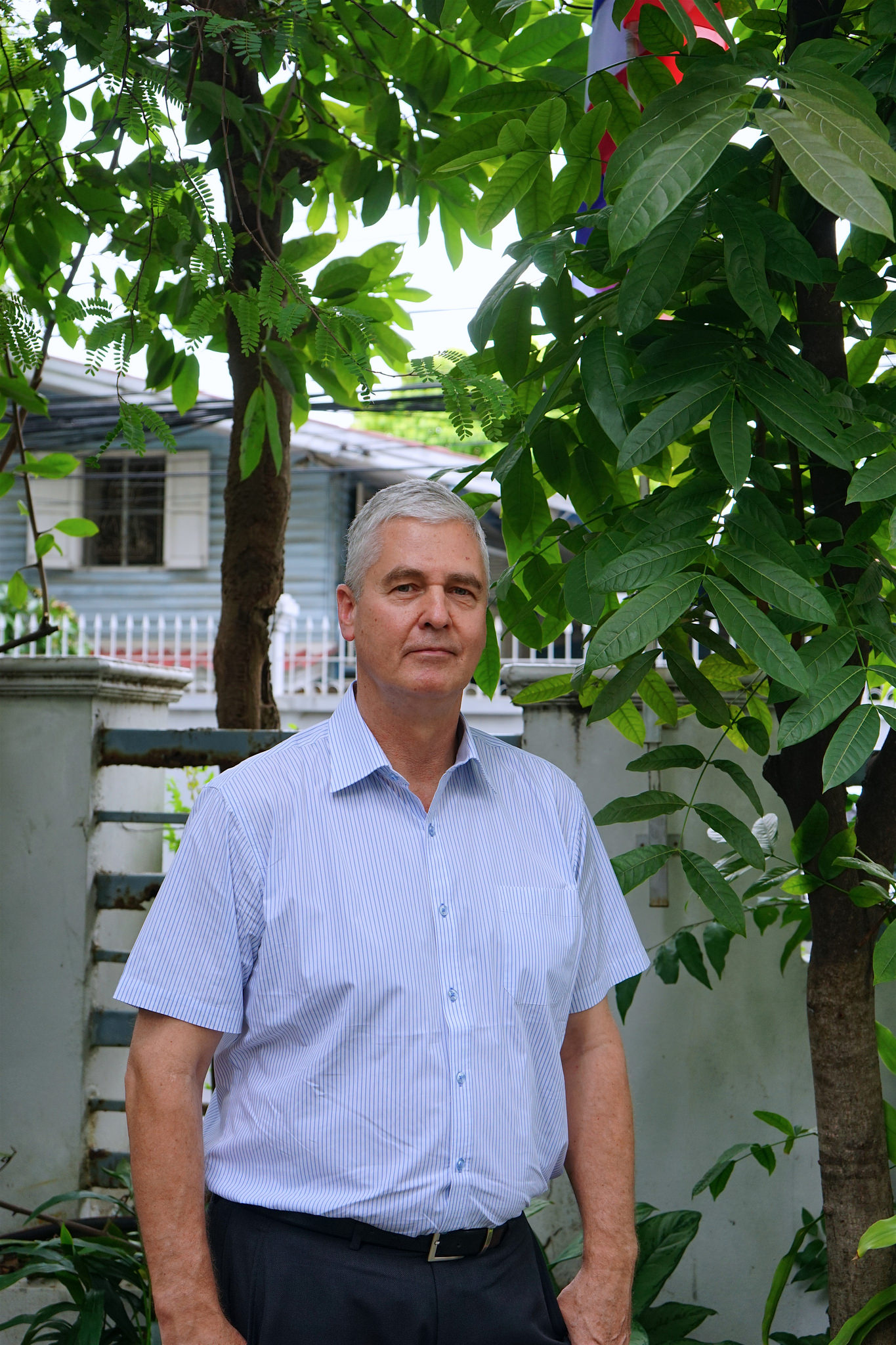 Director general of the Global Green Growth Institute (GGGI) Dr. Frank Rijsberman outside the Office of the Natural Resources and Environmental Policy and Planning in Thailand Photo Credit: Sinsiri Tiwutanond/IPS

Frank Rijsberman (FR): A variety of countries are already convinced green growth is their only option for pollution and climate reasons. For example in Asia, air pollution is a strong driver of investors in green growth. In Seoul, everybody checks the air condition in the morning, because it is a real issue. We have to decide whether we are going to wear air masks or not. In the West, last summer we saw fires and heat waves. And in Africa, the average farmer is convinced the climate has changed.

"In the end there are gonna be more jobs with renewables than with coal." -- Director general of the Global Green Growth Institute (GGGI) Dr. Frank Rijsberman.

I’ve been involved in climate change for a long time, and it used to be something we talked about that would happen in a 100 years. Then for our grandchildren. Then our children and then… it’s today.

Before, ministers of finance used to say they wanted first to develop and then they would care about the climate. Now, they also care about the quality of growth.

FR: The truth is that the U.S. government was very influential in making the Paris Agreement exist in the first place. We have to thank them for that. They brought China to the table.

And after Trump was elected, the Chinese government did not back out, because solar and wind have become cheaper than coal. Wind energy prices have dropped by 66 percent and solar by 86 percent. In the last three years, the atmosphere has changed. There is a stronger belief that renewable energies are making a breakthrough.

Apart from the prices, the second big deal is batteries.Generally, you need a grid or a diesel generator to back solar and wind up. But instead of using diesel generators, now we can use batteries that store energy. Battery prices have also gone down by 80 precent. And over the next five years, batteries will be cheaper than the diesel backups. The investment recommendation we make is to buy batteries now, not diesel generators.

IPS: Where have renewable energies impacted the most?

FR: For example, in electricity production, we’ve seen a huge disruption. Most of the investments go to renewable energies. However, electricity is only 20 percent of energy use.

The other 80 percent is transportation and buildings. But I am confident that in some years, electric vehicles will be cheaper than normal fuel cars. These autonomous vehicles could reduce the number of vehicles in cities by three, which would reduce pollution, traffic, and costs.

FR: Yes. The hardest has been convincing Southeast Asian countries with fast-growing economies. They still invest in coal. Convincing those governments that solar and wind are cheaper remains the biggest challenge.

Sometimes we also find resistance in the utilities, companies that work with fossil fuels. We’ve had one government for which we did a plan for renewable energies, and then they told us they had already signed with fossil fuels. There are also countries where hotels want to put solars on their rooftops, but utilities say: “we will cut you off the grid.”

However, once the government agrees, it can take a short amount of time for them to transition to sustainable energies. In India it took two years. India had coal fired power plants. But as soon as the price of renewables decreased, the coal fired plants went down.

The example of Canberra (Australia) is also enlightening. They decided they wanted to be renewable by 2020. So, they put solars in schools, and they made it accessible so people could also put it on their homes. People got used to it and then they moved to utility-scale renewables.

IPS: Does this resistance in transitioning have to do with the loss of jobs?

FR: In the end there are gonna be more jobs with renewables than with coal. Trump talks about the job losses in coal, but he doesn’t talk about the new jobs with renewables. It’s true they may not be the same people, so you need some formal training. But that is normal. One industry dies and another is born.

IPS: You have been director general for two years, what have you achieved so far?

FR: GGGI has been strong in policy for a number of years. My predecessor saw there was a gap in developing bankable projects, and he started green investment finance services.

In 2017, we mobilised half a billion dollars in green and climate finance for the first time. I increased our goals to mobilise a couple billion dollars in our strategic planning. We raise it by investor commitments. Although our clients are governments, sometimes they can’t find investment themselves for renewable plans. We help find projects, we bring investors to the table, they sign a letter of intent, we hand it to the government and they decide over it.

IPS: And what do you want to accomplish in the next two years?

FR: We want to demonstrate that we can do it. Our goal for 2020 is to raise more than two and a half billion dollars in green and climate finance. And then convince more governments that this is crucial. Not only renewable energy, also waste management, pollution, and green jobs. We want to get more evidence that this works, and scale it to more countries. Our goal is to transform countries’ economies to green growth.