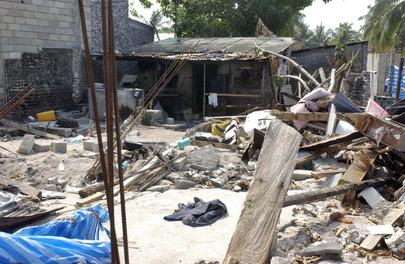 A view of the ravaged village of Vilufushi, on the southeastern Kolhumadulu Atoll, where 17 have died and 28 are still missing after the tsunami swept across their island. Credit: UN Photo/Evan Schneider

Speaking at the high-level General Debate of the UNGA Oct 1, he said that September 23, the day the presidential election took place, was an “extraordinary day for the country and it “was a moment that makes every Maldivian proud of how far we have come and the excellent progress the country has achieved.”

“Following the election, the Maldives is currently going through the process of transfer of power from one elected government to the other,” he said.

On Saturday, September 29, the country’s Election Commission declared Maldivian Democratic Party candidate Solih the winner of the presidential election, overruling the defeated President Abdulla Yameen’s efforts to delay the announcement of the results.

“The accelerated process of democracy in the Maldives is going in tandem with faster growth in social and economic development,” Mohamed said.

The elections came after a tumultuous period during which Yameen had imposed a state of emergency earlier this year and had arrested former President Maumoon Abdul Gayoom, as well as Supreme Court Chief Justice Abdulla Saeed and Judge Ali Hameed and charged them with treason.

Solih was also arrested along with scores of opposition leaders.

Maldives Foreign Minister Mohamed Asim was scheduled to address UNGA last Saturday, September 29, but after the president’s defeat he did not show up and Mohamed, who spoke in his stead, was the last speaker at the concluding session of the high-level General Debate.

Without naming any countries, Mohamed said “the principle of international law that governs the friendly relations and cooperation among states are being challenged at a fundamental level.”

“There is therefore a need for countries big and small to return to the right side of law,” he said.

During the country’s turmoil, the tug of war over the Maldives between the Asian giants, India and China came to the fore. As New Delhi insisted on Maldives adhering to democracy, Yameen began a drift towards Beijing and also reached out to Islamabad.

Unlike last year’s speech by Mohamed at the General Debate, Soli’s address this year hardly gave any importance to climate change, which the archipelago nation has presented to the world as a mortal danger to its very existence because of rising sea levels.

He mentioned in the passing that the UN should be the place where the “combined power of many ideas, many solutions, and many voices thrive to address challenges of climate change, ocean degradation, poverty, exclusion, and discrimination.”

Another mention of climate change came when he spoke of the construction of a bridge connecting the capital with its airport and the suburb of Hulhumalé and said it helped “better adaptation to climate change.”

The Maldivian envoy also gave a lot of importance to the value of the UN as “the engine room of multilateralism” and its role in helping the smaller nations.

“For the small islands developing States, such as the Maldives, the United Nations will always remain the indispensable partner in building our national resilience. We see the UN as the key in determining our place, and our voice, in the global discourse,” he said.

“Ensuring the relevance of the UN, must mean ensuring that everyone, from the biggest to the smallest, play their part,” he added. “It must mean, offering everyone a place, in finding shared solutions for our shared future.”

Mohamed spoke proudly of the nation’s strides in development and in ending poverty.

“From the humble beginning, as one of the poorest countries in the world at independence in 1965, to an upper middle-income country today, is a success story by any measure,” he said.

The per capita gross domestic product shot up from $1,470 in 1980 to $19,120 last, the International Monetary Fund data show, putting it firmly in the middle income countries category.

In per capita terms, Maldives is the richest nation in South Asia.

Mohamed gave his country’s scorecard: “The Maldives has one of the highest human development indicators in our region, with nearly universal literacy rates, universal immunization, and the lowest infant-mortality, and maternal-mortality rates. The country has eradicated diseases, such as polio, measles, malaria, and lymphatic filariasis, although various types of non-communicable diseases, are emerging as new challenges.”

He praised Yameen for what he said was the progress recorded by the Indian Ocean archipelago nation during the last five years under his rule.

He made an appeal for support to small island developing states like his for capacity building, through transfer of technology, and access to finance in order to achieve the UN’s sustainable development goals.

“The United Nations can assume a greater level of leadership in fostering such support,” he said.