Why I Became a Disaster Expert 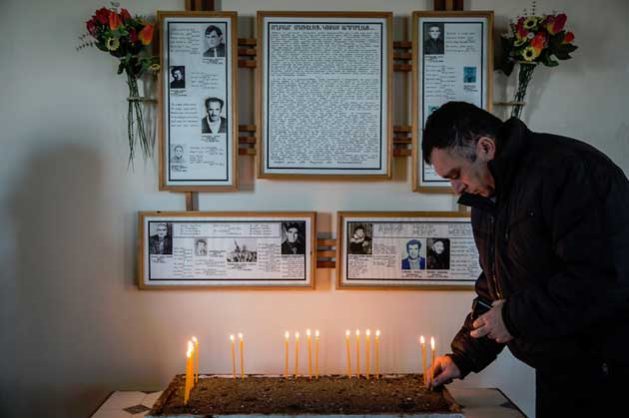 A man in northern Armenia remembers the victims of the Spitak earthquake. Credit: Jodi Hilton

Nov 26 2018 (IPS) - Thirty years ago, a powerful earthquake ripped through my home country of Armenia, leaving 25,000 dead, 500,000 homeless and annihilating an estimated 40 percent of the national economy.

The northern city of Spitak and many other villages around it were wiped out completely.

I was 20 and felt helpless, angry and at the same time eager to act. The police and army were clearly overwhelmed. Ordinary people tried to remove the rubble, while soldiers stood outside the central bank to prevent people from looting it.

Rescue teams and humanitarian cargo started to pour into Armenia three days after the earthquake. Cars blocked the incoming aid on some of the main arteries. There was no reception center at the airport and no available transport from Yerevan to the affected areas. The government came under heavy criticism for its lack of coordination of the aid response.

Two years earlier, Soviet authorities had been accused of covering up Chernobyl. This time around, they decided to publicly announce the disaster. The outspoken Armenian diaspora in the West also put pressure.

As a result, this was the first disaster within the Soviet Union where foreign aid was allowed to intervene. The entire world descended on the quake zone: Russians, Italians, French, Germans, Czechs and Georgians, all with their cranes and tractors, food and medical supplies.

I took the road with several university friends, most of us fresh out of military service. We didn’t take any bags with us.

We had to walk the last twenty kilometers to finally reach Spitak. What I saw there was unimaginable. An army friend of mine died in the rubble just within five days of returning, like us, from military duty. Fifty-three children died in that same building. “We cried and worked, hoping to find someone alive”, his family said.

After helping out for three days, I left as the French arrived. We had become a burden, needing food, water, shelter and clothes as temperatures plunged to minus 20 degrees at night. And though we thought of ourselves as strong young folks, physical and mental strength turned out to be very different things.

The earthquake in Spitak triggered the first wave of Armenian emigration in modern history. In total, 500,000 left, having lost their jobs, homes and in many cases friends and relatives.

The event brought seismology and earthquake preparedness in Armenia to new heights. The population also became intensely aware of its surroundings. For instance, the nearby town of Kirovakan was known for its chemical factory. While there were officially no major leaks, people felt insecure as the plant broke down and lay in disrepair.

Quickly, the cemeteries around Spitak outgrew nearby villages. There were villages built by the Italians, a hospital staffed by Norwegians, a residential block erected with money from Uzbekistan, schools and hospitals from Russia and Ukraine and even a street rebuilt by Georgia.

To make matters even worse, a conflict with neighboring Azerbaijan erupted that year. That and the collapse of the Soviet Union slowed down recovery efforts as Western teams departed. In the midst of war, Armenia prioritized security over reconstruction.

One of the by-products of the earthquake was the creation of a United Nations mechanism that immediately deploys national search and rescue teams to disaster sites. That system has served hundreds of disasters and saved thousands of people.

Having experienced a devastating earthquake at first hand and noticed how long-lasting its consequences were, I became a disaster expert at the United Nations Development Programme (UNDP), focusing on preparedness and long-term economic recovery.

Nowadays, preparing for natural disasters is not just a science and a practice. It is part of every international development framework: Because economic investments and living standards can be razed to the ground within a few minutes, as was the case in Armenia, then how do we limit the possible impact of such a disaster?

Governments, which are primarily responsible for protecting people, need to work on risk maps, early warning mechanisms, building standards, insurance mechanisms and many other important measures.

Today, Armenia has among the best seismic building codes and has all the laws in place to enable a quick emergency response. It even sends experts abroad.

These efforts cannot bring back the people we loved. But should the worse come to worst, they could protect many more down the line.