Branislav Gosovic, worked in UNCTAD, UNEP, UNECLAC, World Commission on Environment and Development, South Commission, and South Centre (1991-2005), and is the author of the recently-published book ‘The South Shaping the Global Future, 6 Decades of the South-North Development Struggle in the UN.’ 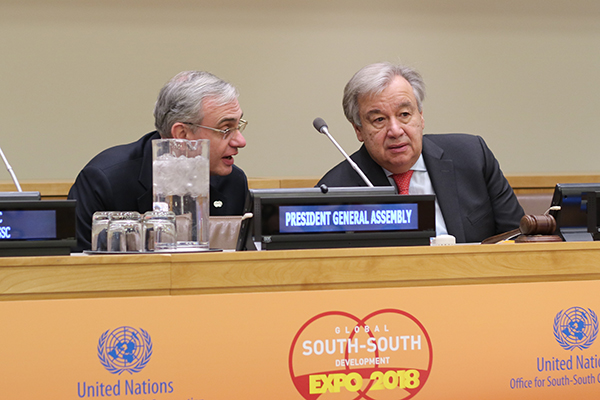 GENEVA, Dec 21 2018 (IPS) - The upcoming conference on the Buenos Aires Plan of Action (BAPA+40), scheduled to take place in the Argentine capital on 20-22 March 2019, ought to be more than just another UN conference where the developing countries assemble to present their demands and seek support from the North.

Also, it must not turn out to be a replay of the 2009 1st UN High-level Conference on South-South Cooperation*, i.e. an anodyne event in terms of impact and follow-up, though such a scenario may be preferred by some, risk of which exists since the 2019 gathering is also scheduled to last only three days, not enough time for genuine deliberations and negotiations.

Therefore, it is up to the developing countries to build up BAPA+40 into a major global event.

a. South-South cooperation and the United Nations system

One of the key objectives of the Global South at BAPA+40 should be to place South-South cooperation at the very centre of the UN system of multilateral cooperation.

The UN system needs to recognize the diversity and broad spectrum that SSC subsumes, to resist the limits being imposed on SSC and it being distanced and cut off from its original institutional and political roots and aspirations.

The United Nations ought to introduce clear and specific measures and programmes, necessary human and financial resources, and mandates by “mainstreaming” and “enhancing support” for SSC in every organization and agency of the UN system, to have them incorporate the needs and objectives of South-South cooperation.

This cannot and should not be the end-station, but needs to be followed up ambitiously and seriously at the global level, by appointment of a UN Secretary-General’s high level representative who would provide political vision for South-South cooperation and the establishment of a UN specialized entity within the UNDP platform or in the UN Development System (UNDS) in the making, whose mission would be to promote South-South cooperation, as recommended by the Group of 77 Ministerial Meeting.

Any such entity would need to have its own intergovernmental machinery, a major capital development fund for South-South projects, and fully staffed substantive secretariat equipped to perform a number of important functions, including initiating and funding projects, undertaking research, maintaining a data base on SSC and a directory of national actors involved in SSC, and publishing a regular, periodic UN report on South-South Cooperation called for by G77 Summits.

A suggestion has been floated to consider entrusting this task to UNCTAD, given that its mandate concerning North-South issues has been eroded and its role marginalized.

Such a central entity for SSC would need to be backed, at the regional level, by greatly strengthened and invigorated UN regional economic commissions in the South.

These Commissions are the principal UN bodies based in and with a full knowledge of their respective regions. Their key mission should be the promotion of South-South cooperation or “horizontal cooperation”, as traditionally referred to in Latin America.

The proposed structure, drawing also on UN specialized agencies in their areas of competence, would have as one of its tasks to support and energize sub-regional, regional and inter-regional South-South cooperation.

b. Global South and South-South cooperation

Given the overall global context, the developing countries cannot rely solely on the United Nations, even if and when the suggested institutional improvements are approved and become operational.

South-South cooperation is an opportunity for the Global South to contribute to achieving a number of outstanding goals and aspirations and be a vehicle for reshaping the global system.

For this to happen, however, what is needed on the part of the developing countries is hard work, mobilization of resources and of collective power, major and sustained efforts and commitment/obligation to pursue and attain a series of objectives that need to be identified and agreed on.

In their efforts to follow this advice, in addition to many practical obstacles and problems, the developing countries would also encounter opposition and doubts within their own ranks, not to mention a frontal or undercover resistance by actors of the North.

This resistance would especially come from those who would consider every major move in that direction as a potential threat to their own interests and global designs, and would, very likely, take steps, including within individual developing countries, often with local support and even via ”inconvenient” regime and leadership change, to influence and embroil the collective efforts.

What matters, however, is that today the Global South has the resources and collective power to move forward, and that this is not a “mission impossible”, as some who are familiar with problems and difficulties encountered in South-South cooperation efforts and undertakings and the building and management of joint institutions might point out. There is little that stands in the way of:

• Undertaking a critical, in-depth review and analysis of: South-South cooperation, important actions and proposals agreed on over the years and their implementation, experiences, public attitudes, performance of individual countries, functioning of joint institutions and mechanisms of cooperation and integration, main obstacles and shortcomings that call for action, including the all too frequent difficulties or failure to follow up on important decisions taken at the political level.

• Focussing on how to resolve the issue of lack of adequate financing for South-South cooperation, activities, projects and institutions, probably one of the most serious practical obstacles standing in the way of SSC being put into practice as desired and called for.

• Inspiring, informing about and involving in the South-South cooperation project the public and individuals; with this in mind, applying capacity-building and training to raise the awareness of the existing experiences and opportunities; using to this end also educational, marketing, media and public relations approaches, which are so common in contemporary society and are used not only to advertise and publicize goods and services, but also political and social goals and causes, in this case the common identity of the South as an entity.

• Setting up a South organization for South-South cooperation, and pooling together and networking intellectual and analytical resources available in the South and internationally to staff and support the work of that institution.

• Placing on the agenda the challenge of intellectual self-empowerment of the Global South and the harnessing of its intellectual resources and institutions into an interactive network for support of common goals and collective actions.

• Evolving, at the highest level, a representative system of political authority (e.g., heads of state or government, one delegated from each region) for regular and ad hoc communication, consultations and contacts, for meetings to assess progress in the implementation of agreed SSC goals, and for communication/interaction with all heads of state and/or government in the Global South.

• Based on the workings and experience of the South Commission, of the now defunct UN Committee on Development Planning and of the G77 High-Level Panel of Eminent Personalities of the South, to consider establishing a permanent South-South commission or committee to bring together, on a regular basis, high-stature personalities and thinkers from the South to reflect and deliberate on challenges faced by the developing countries and by the international community.

• Elaborating and agreeing on a blueprint for national self-empowerment for South-South cooperation, to guide and be used as a reference by the individual developing countries in line with their own characteristics and capacities, and transforming this blueprint into a legal instrument binding for all developing countries.

• Nurturing, training and educating future cadres and leaders for South-South cooperation, directly exposing them to and familiarizing them with different problems and different regions of the South, and, when they are ready, deploying them in national, sub-regional, regional and multilateral, including UN, settings.

• Focussing on the role of “digital South-South cooperation” in the promotion and energizing of all forms of South-South cooperation, including closer contacts, communication, information sharing and interaction, mutual understanding between and among the peoples and countries of the South, transfer of technology, and education and culture.

• Calling for closer cooperation between and joint initiatives of G77 and NAM, an important pending political and institutional topic on the agenda of the Global South.

There is little new in the above suggestions, which draw on practical experiences and have been articulated over the years and in different contexts. What they propose is within reach, is doable, and would represent a major “leap forward” for South-South cooperation.

What is needed today is firm political will, long-term vision and determined initiative for a group of the South’s countries and leaders to launch such a process on the desired track and, most importantly, sustain it with the necessary political commitment and financial and institutional support.

The 2019 Buenos Aires Conference in March next year is an opportunity for the South to stand up and raise its collective voice, as at the very beginnings of South-South cooperation in Bandung (1955), Belgrade (1961), Geneva (1964) and Algiers (1967).

* This article is a shortened version of the concluding pages of an extensive essay “On the eve of BAPA+40 – South-South Cooperation in today’s geopolitical context”, which was published in VESTNIK RUDN. International Relations, 2018, Volume 18, Issue 03, October 2018, pp. 459-478, the international journal of the Peoples’ Friendship University of Russia (RUDN), formerly Patrice Lumumba University, in a special volume to mark the 40th anniversary of the Buenos Aires Plan of Action. (See http://journals.rudn.ru/international-relations/article/view/20098/16398 )