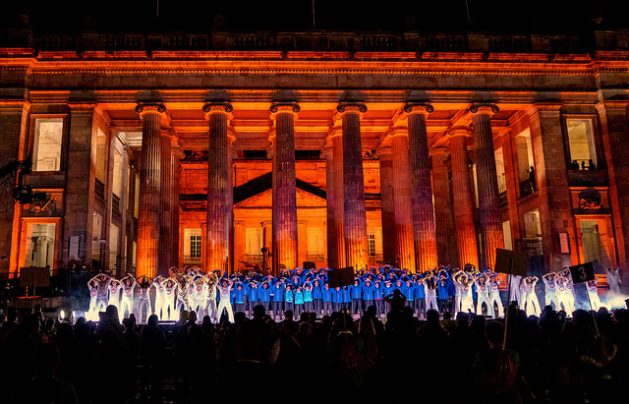 United Nations Women and partners in Colombia organised a public concert in November and lit public buildings in orange calling for women’s right to live a life free of violence. However, despite the rise in women’s resistance, women’s rights continue to be sidelined and increasingly face blatant attacks, according to Amnesty International. Courtesy: UN Women

Marking the 70th anniversary of the Universal Declaration of Human Rights (UDHR), Amnesty International launched its annual report reviewing the state of human rights around the world—and it doesn’t look good.

“In 2018, we witnessed many of these self-proclaimed ‘tough guy’ leaders trying to undermine the very principle of equality – the bedrock of human rights law. They think their policies make them tough, but they amount to little more than bully tactics trying to demonise and persecute already marginalised and vulnerable communities,” said Amnesty International’s Secretary-General Kumi Naidoo in the foreword of the report.

“It is very distressing,” she said.

But among the rays of hope is women-led movements, Mishra added.

While the #MeToo movement has captured international attention, women have mobilised mass movements on women’s rights around the world in the past year at a scale never seen before.

In Argentina, one million women took to the streets demanding the legalisation of abortion, while in Nigeria thousands of displaced women mobilised for justice for the abuses they suffered at the hands of Boko Haram and Nigerian security forces.

While some of these movements were galvanised in response to newer forms of oppression, others are against old forms of discrimination that have no place in today’s society.

Mishra pointed to India where earlier this year, a group of women activists advocated for their right to participate in a historic pilgrimage to Sabarimala temple, one of the holiest sites in Hinduism which has long barred entry to women of menstruating age.

While the Right to Pray movement successfully led to the Supreme Court overturning the ban, violent protests have erupted in the southern state of Kerala as devotees block women from entering the temple.

It is thus hard to celebrate the rise of women’s activism as the stark reality is that many governments and societies continue to support policies and laws that oppress women, this year’s ‘Rights Today’ report found.

This can especially be seen around sexual and reproductive health rights.

El Salvador has some of the stricter abortion policies in the world as women can be jailed if they are suspected of having an abortion.

In February, Teodora del Carmen Vasquez was released after spending a decade in prison after having pregnancy-related complications which resulted in a stillbirth.

Despite protests against the draconian law,  the country failed to pass a reform to decriminalise abortion in April, leaving women and girls with no control over their reproductive and sexual health.

Among those killed in 2018 was Marielle Franco, a Brazilian politician and human rights activist who was shot in her car in March.

Women activists have also been jailed around the world including Loujain al-Hathloul, Iman al-Nafjan and Aziza al-Yousef, Saudi activists who led the movement fighting for women’s right to drive.

Such attacks on human rights defenders is not happening in a vacuum, but rather in a world where civil society space is shrinking, Mishra noted.

Mishra highlighted the need for action at all levels to achieve human rights for all, but civil society in particular must step up.

“All these years, human rights organisations have really not done enough on women’s rights. We’ve always treated it as a secondary kind of issue…now that it has been 70 years of UDHR, it is time for us to think how do we really bring women to the centre of our work,” she told IPS.

The report urges civil society and governments to raise their commitments to uphold women’s rights, and implement changes to harmful national laws.

Naidoo particularly pointed to the Convention on the Elimination of all Forms of Discrimination against Women (CEDAW), whose 40th anniversary is soon approaching, will be an “important milestone that the world cannot afford to overlook.”

While CEDAW is the second most ratified human rights treaty, with 189 state parties, the non-legally binding document allows states to reject provisions.

For instance, Kuwait reserved its right to not implement Article 9 which grants women equal rights with men with respect to the nationality of their children.

Niger expressed reservation to Article 2 which states the need to refrain from engaging in any act of discrimination against women and to modify and abolish existing laws and practices which constitute such discrimination.

“Governments must stop merely paying lip-service to women’s rights. If the undeniable surge of women’s activism this year proves anything, it is that people will not accept this. And neither will we,” Naidoo wrote.