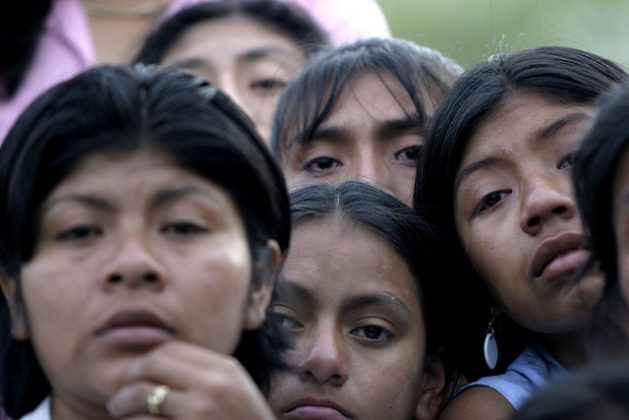 A group of girls from the Amazon region of Peru, the region with the highest teen pregnancy rate, including girls under 14. Latin America is the second region in the world in terms of teen pregnancy, only behind sub-Saharan Africa. Credit: Mariela Jara/IPS

LIMA, Jan 14 2019 (IPS) - Research and campaigns by women’s rights advocates are beginning to focus on the problem of Latin American girls under the age of 14 who are forced to bear the children of their rapists, with the lifelong implications that entails and without the protection of public policies guaranteeing their human rights.

The Latin American and Caribbean Committee for the Defence of Women’s Rights (Cladem) addressed the issue of teenage girls who fell pregnant as a result of rape, in a 2016 study in 14 countries of the region, to remove the cloak of invisibility.

Julia Escalante, a Mexican lawyer and Cladem regional coordinator, told IPS that it was the case of Paraguayan girl Mainunbuy (not her real name) that motivated them to delve deeper into the issue. The girl became pregnant in 2015 after she was raped by her stepfather and was not allowed to have an abortion.

Cladem and Equality Now turned to the Inter-American Commission on Human Rights (IACHR) in May of that year, which urged the Paraguayan state to protect the Paraguayan girl’s life and rights. But that did not happen, and since then similar cases have arisen in that South American country, the last one in November.

“The case of Mainunbuy led us to ask what is happening in other countries of the region. We found a lack of policies to prevent pregnancy and childbearing among children, and to protect the rights of girls,” she said.

A study published in 2018 by the United Nations Population Fund (UNFPA) reported that this is the second region in the world, after Sub-Saharan Africa, with the highest teenage pregnancy rate, with 66.5 births per thousand girls and adolescents, compared to a global rate of 46.

Cladem’s study of 14 countries, Child Mothers. Forced Child Pregnancy and Motherhood in Latin America and the Caribbean, underscores that according to the laws in this region, all births to girls under the age of 14 are legally the result of rape or statutory rape.

Organisations that defend women’s rights in the region say that a forced child pregnancy occurs when a girl under the age of 14 becomes pregnant without having sought or desired it and faces obstacles that keep her from having an abortion if she so wishes.

This Lima-based regional network that is active in 15 countries is carrying out the campaign “Child Pregnancy is Torture”, which has contributed to raising awareness about this silenced issue in the international community. 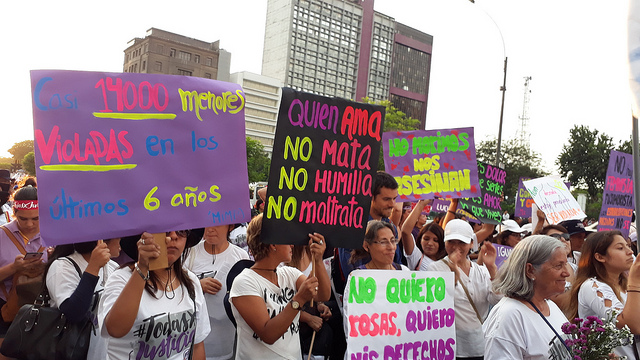 “Some 14,000 girls have been raped in the last six years,” reads the poster on the left during a demonstration in Lima on the International Day for the Elimination of Violence against Women, which is celebrated Nov. 25. Rape is the cause of child pregnancy and forced motherhood in Peru, as in other Latin American countries. Credit: Mariela Jara/IPS

Escalante emphasises the responsibility of governments, which it called upon to gather specific, broken-down statistics on pregnancies and childbirths to girls under 14 years of age.

It also called for prevention measures through comprehensive sex education with a gender perspective from early childhood onwards, the inclusion of such content in the media, and a halt to the sexualisation of girls in the media.

At the same time, it demanded that States remove the normative, legal and cultural obstacles that prevent access to abortion for pregnant girls, and thus avoid irreparable damage to their physical and mental health.

The United Nations Children’s Fund (UNICEF) has been sounding the alert on the steady rise in teen pregnancy and motherhood in Latin America and the Caribbean.

Speaking to IPS, Olga Isaza of Colombia, Unicef’s deputy representative in Peru, first specified the figures for child motherhood in the country, which serves as an example of the phenomenon in the region.

She said that between 2011 and 2017, the public health system attended 14,325 births to girls under 15. In addition, in 2015 the National Registry of Identification and Civil Status registered 1,538 newborns to mothers between the ages of 11 and 14 years.

“In 71 percent of the cases, the fathers of these newborns were older than 18, which confirms the sexual abuse underlying these pregnancies,” Isaza said.

The annual teen pregnancy rate in Peru is 13 percent of all pregnancies – a percentage that rises as high as 30 percent in Amazon jungle regions such as Loreto.

“The group of girls under 14 is the one that worries us most because there is a relationship of submission and power that leads to girls having children, girls whose rights to be protected against all forms of violence and to live according to their age and to grow up are violated,” said the U.N. official.

Isaza mentioned five policy recommendations to ensure the rights of adolescents and young people presented in Peru by the United Nations agencies, led by UNICEF and UNFPA (the U.N. Population Fund), and which can be adopted in other countries.

For example, the design of comprehensive policy packages to address the development aspect of children under 14 and access to friendly health services at appropriate times of the day and with specially trained personnel, as well as comprehensive sex education and making such information available to the girls’ families.

“It is about the home and school being safe spaces for every child and adolescent, for them to have health, education, protection against all forms of violence, and participation in their communities,” Isaza said.

He added that priority should be given to the areas of greatest risk in each country and that, in order to be effective, these measures of comprehensive action by the State must be culturally appropriate, including personnel trained and qualified to provide quality services, and a sufficient budget to be implemented efficiently.

Isaza noted that 13 of the 17 Sustainable Development Goals (SDGs), which make up the Development Agenda 2030, are directly associated with children and adolescents, in order to reach that year with this generation in better conditions in terms of health, education, justice, protection and gender equality.

“And the only way to do that is to make the SDGs a commitment of the States and for each segment of society to assume its role and live up to it, to agree on a broad social consensus,” she stressed.