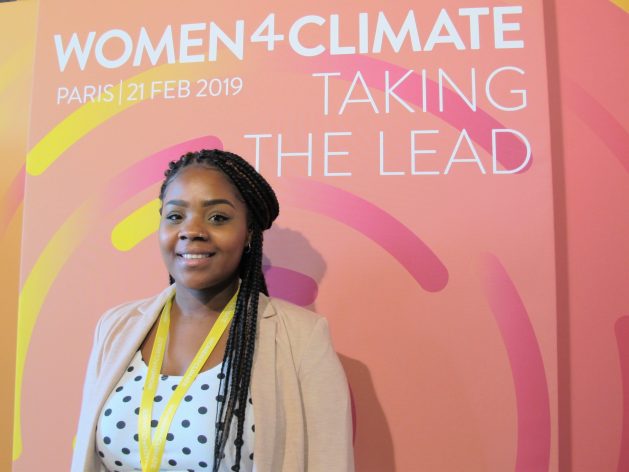 PARIS, Feb 22 2019 (IPS) - As the grandchild of Jamaican citizens who moved to Great Britain, Monique Taffe says she inherited a tradition of recycling and learned not to be part of the “throwaway culture”, as some environmentalists have labelled consumerist societies.

“I saw how my grandmother re-used things, and that was passed down to my mother who inspired me to do the same,” said Taffe, who wants to use waste materials and recycled fabrics in fashion design.

The 22-year-old London-based designer is a recent graduate of a British fashion school and she participated in the 3rd Women4Climate conference that took place Feb. 21 in Paris. She joined other young women from around the world, including from several Latin American countries, who have launched sustainability projects and are being mentored by member cities of C40, a network of 94 “megacities” committed to addressing climate change – and which co-organised the conference titled “Taking the Lead”.

Taffe has started a project to design maternity sportswear, encouraging expectant mothers to exercise during their pregnancy. All the clothing is being made from recycled textiles and objects at her Taffe Jones startup company, she told IPS.

She is also one of 10 finalists from some 450 contestants for London’s Mayors Entrepreneur Programme 2018, in which the city linked to the Women4Climate Mentoring Programme. The aim is to develop innovative businesses that are meant to tackle climate change.

“Women leaders played a pivotal role in negotiating the Paris Agreement on climate change in 2015 and will be crucial to its success in the future,” says Women4Climate, which was launched in 2016. “Now more than ever, enhancing women’s participation and leadership will be critical to securing a healthy, prosperous and sustainable future for us all.”

Taffe said in an interview that she would like to see young people in Britain, the Caribbean and around the world getting together via social media to share best practices for textile recycling. This could include information about leaving used clothing in central depots or designated places, where designers and others could retrieve material. Recycling in the fashion industry could have a positive environmental impact, as the sector is one of the most polluting, according to experts.

The United Nations Environment Programme says that the fashion industry “produces 20 percent of global wastewater and 10 percent of global carbon emissions – more than all international flights and maritime shipping.” The agency adds that “textile dyeing is the second largest polluter of water globally and it takes around 2,000 gallons of water to make a typical pair of jeans”.

At the U.N. Environment Assembly next month, the agency will “formally launch the U.N. Alliance on Sustainable Fashion to encourage the private sector, governments and non-governmental organisations to create an industry-wide push for action to reduce fashion’s negative social, economic and environmental impact,” the U.N. says.

With clothing factories across Latin America and the Caribbean, this is an area that environmentalists are addressing as well, with organisations saying that the main focus is on waste management, including textiles and plastics that pollute the region’s beaches.

The Jamaica Environmental Trust, an NGO based in Kingston, emphasises recycling, conducts beach clean-ups with volunteers, and works to protect air and water quality, a spokesperson told IPS. Its leadership team consists mostly of young women, like Taffe, who work to sensitise the public to environmental and climate issues.

“Raising awareness will help other young people to see what’s being done and make it easier for us to form alliances for climate action,” Taffe said.

She and other observers have noted the measures taken in the Caribbean to ban single-use plastic bags and straws and to expand the use of solar power. The Jamaican government, for instance, announced last year that it wants the country to reach 50 percent renewable energy by 2030, up from the previous policy of 30 percent.

Although no Caribbean city is a member of C40, attending international conferences such as Women4Climate was one way of bringing ecological entrepreneurs together to share experiences, participants said.

In fact, forming international links was a central theme of the event, hosted by Paris mayor Anne Hidalgo (the initiator of the Women4Climate idea) and held in the French capital’s imposing city hall – flanked by the blue and green bicycles of the city’s bike-sharing scheme.

Representing cities such as Quito (Ecuador), Mexico City, and Santiago (Chile), Taffe and other women from around the world shared projects on sustainability and carbon-emissions reduction. They described ventures to improve species conservation in towns, understand and stop urban sprawl, transform restaurant waste into biogas and increase textile recycling.

“Climate change often has impact first on the lives of women … who traditionally are the ones taking care of the family, so women’s skills should be acknowledged,” said Hidalgo at the conference. “This is not to say women are better than men but that women have different skills and competences that are crucial in the fight against climate change.”

Hidalgo said policy makers and activists had to “think locally to act globally”.

“We cannot fight against climate change effectively without empowering women,” said Rodacio Rodas, the mayor of Quito. He described food-security and urban garden projects that employ women and added that at the “community” level, women could be empowered and could empower themselves to take action.

Many delegates, however, highlighted the lack of national support for climate action by some male leaders, with Clover Moore, the Lord Mayor of Sydney, deploring the global effects of climate-sceptic governments.

“We’re as devastated across the world by Trump as you are in the U.S.,” Moore said, referring to the U.S. president’s lack of support for the Paris Agreement on climate change, but she added that the prime minister of Australia was not “much better”.

In a movement known as “Youth Strike 4 Climate”, led by Swedish teenager Greta Thunberg, students in several countries have been staying out of school on certain days to protest inaction by their governments against global warming. “Young people see what’s happening, they know the science,” Moore said.

Student participants at the Women4Climate conference included 17-year-old Youna Marette, a Belgian high school activist who was one of the keynote speakers.

“We’ll continue to fight, strike … for our future,” Marette declared, urging governments to create more inclusive societies and to increase action to protect the planet.

For Taffe, the up-and-coming designer, thinking of the future and a liveable world is a strong motivation. “My grandmother passed down ways to live sustainably, and I want to carry that on,” she told IPS. “We have to re-use and recycle and do what we can wherever we live.”