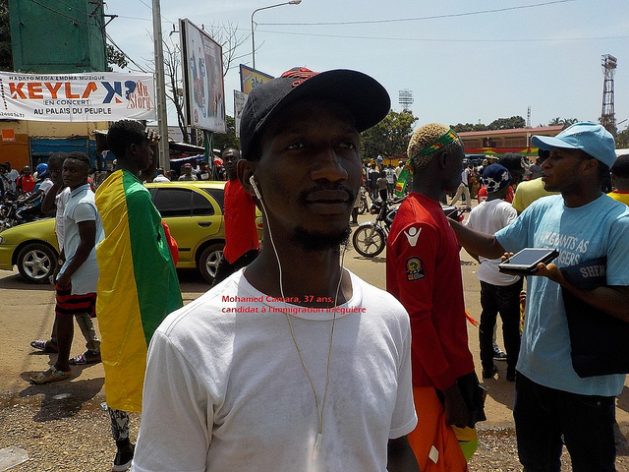 Mohamed Camara, 37, wants to go to the West. But, with the advice and information promulgated by Migrants as Messengers volunteers, he now promises to follow a regular route. Credit: Amadou Kendessa Diallo/IPS

CONAKRY, Mar 5 2019 (IPS) - Every year, there thousands of young people, including women and children, who try to irregularly reach Europe and what, they hope, will be a better life.

But the journey to Europe has been dangerous for many. This has included experiencing harsh and difficult conditions when crossing both the desert and the Mediterranean, and being subject to scams, prison, violence and racist insults on a daily basis. So why are they risking their lives?

Most of the young Guineans interviewed by IPS mention the low level and quality of education in their country, endemic unemployment and sometimes the destruction of their shops and workplaces during political demonstrations. They say there is “no hope” for them if they stay in the country in the face of hardships and family misery.

Some of them also told IPS that they dream of going to Europe to “continue their studies and have the means to support their families”.

The International Organization for Migration (IOM) has launched a project called Migrants as Messengers (MaM), which aims to make future candidates aware of the dangers of irregular migration. In Guinea, migrants who have returned home are involved in awareness-raising activities with logistical support and training from IOM-Guinea.

Most of them tell IPS that they have easily re-integrated among their communities. This is the case for Nestor Haba, a returnee migrant. “I went out with my head up. I did not steal someone’s money before taking this very dangerous route. I am well reinstated.”

On the other hand, Fatoumata Diallo tells IPS she became the laughingstock among her friends. “Others laughed at me saying that the European came back but we did not see what she sent.” But, “there were also some friends who encouraged me by saying that this is not the end of the world.”

However, most of the migrants surveyed have a common cause: that they are determined to permanently repudiate irregular migration because of the unspeakable torments that they have experienced firsthand.

Back in Guinea, most migrants have become involved in awareness-raising activities organised by IOM, and have been trained how to interview and record other returnee migrants.

This is the case of Abdoul Aziz Touré, a young returning migrant who travelled through Gao (the most difficult route), who asserts, “Today, I can thank God. Before I travelled, frankly, I had no hope. I had enough problems here. But since my homecoming, thanks to the IOM, I have a lot of hope. With all the help that IOM has given me, I can hope. I did not get what I was looking for in the West. But today, I hope I will have it here because realities have shown me that it is possible to succeed here.”

Elhadj Mamadou Diallo recalls the reasons for his departure from Guinea: “I left because I had nothing … I could not stay because when parents support you throughout your studies, you finish and stay for two more years, still being dependent on [your] family.”

He added that if one wanted to work in order to become independent, one had to leave home.

How do migrants sensitise Guinean youth?

Equipped with an app that has a questionnaire, the returnee migrants take advantage of major events around Conakry, the country’s capital, to educate Guineans on the dangers of irregular migration.

They also go door-to-door as part of an outreach to deter both parents and youth. If this initiative is appreciated by some young people and parents, there are others who do not want to understand anything because they are determined, whatever the cost, to take the route of irregular migration.

IPS followed the Guinea team on its campaign through many parts of the capital.

The MaM volunteers introduce themselves, explain the reasons for the presence of the team, and ask if the youth are willing to answer a series of questions.

During a Guinea-Rwanda football match, played in Conakry last year, Béavogui Jean, tablet in hand, showed up in front of a youngster. “I’m here to raise awareness about irregular migration. Our goal is to explain the suffering involved in this unfortunate adventure in the desert and in the host cities. That’s why we come to young people to raise awareness,” he began. This teenager immediately stopped him and said: “I am busy”.

On the other hand Camara Fantamady, 23, an unemployed graduate, willingly answered the questionnaire. He did not know about the MaM project. However, he says, the story of the repelled migrants has changed his perception of immigration. Now, he says, “if I have to travel, I will take the regular route.”

Mamadou Diouldé Barry is an first year undergraduate student at a private university in Conakry. He does not know anything about the MaM campaign either but says, “I dream of going to Europe to have something to feed my family with, and have money to live well.”

“I have talked to people there; they said it’s better than here. Even if you do not find enough, having something to eat is easy. Life is beautiful,” he says.

However, he adds: “I do not want to go through the desert. The road has enough risks. I have many friends who have been there, they told me not to follow the road.”

But “if it’s the plane, when you fly from here to Morocco, it’s very easy. You have fewer problems and there is no suffering. When you land in Morocco and you have money, you are not going to stay for long.”

“In any case, what interests me is to enter Europe, whatever the route,” he concludes.

It is people like Barry that Haba wants to educate further: “We take advantage of major events to convey awareness messages so as to dissuade young Guineans and avoid other tragedies. Young people want us to share our story”. But, he laments, “in Guinea, there are few young people who dare give up on illegal immigration, but there are others who say that in Guinea, it’s better for them.”

Mohamed Camara, 37, plans to go to the West. But, with the advice and information provided by MaM volunteers, he now promises to travel through the regular channels if he has the means to do so.

“I want to go to Europe,” he reveals, before saying that he knows the difficulties involved in taking the road to Niger. “With the information received concerning the road to Gao or Niger, about the harassment en route, I refuse to venture there. My friends who have been to these places have told me that they have gone through hell. Thirst, hunger, arrests, robbery and all kinds of bullying, were their everyday companions.”

IPS follows the migrants in their door-to-door outreach at Lansanayah Barrage, a neighbourhood in the upper-class suburbs of Conakry. During this awareness day, the team visited homes, young people at a tea gathering, and in bars.

An elderly lady in her 60s (who requested anonymity) encourages the team to continue raising awareness. “I do not have any candidates here. I am against irregular immigration,” she says, after asking the guests to sit on the terrace of her house. She states that the government alone cannot solve the phenomenon. For this sexagenarian: “what the Guineans are fleeing, the others use this to stay in their country.”

For Mohamed Conté, a third year Bachelor’s student, “young Guineans are aware of the risks of irregular migration but want to travel.”

It is a confirmation of what Haba says: “Some young people are determined to go. But, we are doing our best. We tell them it’s very dangerous.”