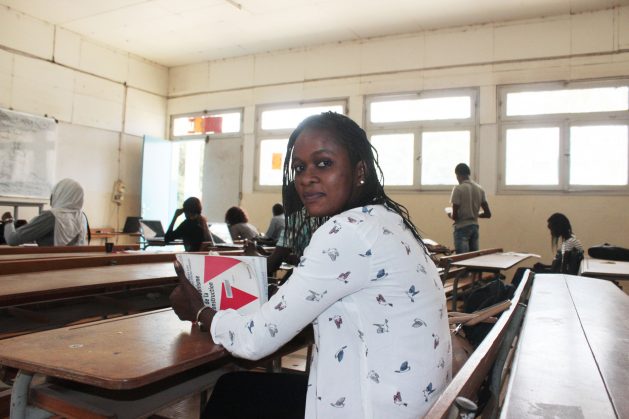 DAKAR, Dec 17 2018 (IPS) - Masters of Laws student Khoudia Ndiaye will graduate from Senegal’s University Cheikh Anta Diop (UCAD) next year. The 24-year-old, who specialised in notarial law and dreams of becoming a notary, wants to bring justice closer to local communities like those in her local district of Hann Bel-Air, in Senegal’s capital Dakar, where she rarely sees female lawyers.

While the young, intelligent and dedicated Ndiaye has a bright future ahead of her and speaks with enthusiasm about it, there was a time not too long ago that she never dreamt of becoming so successful. Instead she was living—in fear and subject to racism—in a foreign country.

Ndiaye is a returnee migrant. In 2012, while only 18, and after being enrolled at UCAD’s Faculty of Law for just four months, she was overwhelmed.

Now when she speaks about her reasons for wanting to leave Senegal, she lowers her head and laughs.
“In the first year of law at the university, we were 4,000 students and I underestimated myself because I did not think I had a chance to succeed in this world,” she tells IPS.

A journey into disillusionment

She began to look for something else to do with her life. She always wanted to work at a call centre and had been told by her cousin Pape, who was living in Morocco, “that call centre employees are very well paid and well connected.” 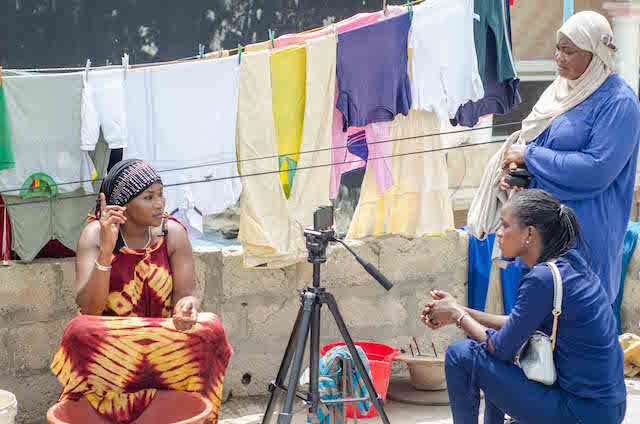 Leaving one’s family and daring to go on an adventure without warning is a brave decision—surrealistic even—for a young girl in a deeply-religious society like Senegal. “It was not easy to make such a decision. I did not tell my parents because if they knew about my idea, they would not allow me to leave,” Ndiaye remembers.

Pape put her in contact with the people who would help her migrate without regular papers.
“I financed my trip with my scholarship up to 200.000FCFA which is the equivalent of 348 dollars.”
But on the day of the trip to the “promised land” she realised that she was deceived because she had believed she would fly to Morocco, but instead “ended up taking a bus by force”.

After journeying 3,000 kilometres in a minibus, Ndiaye, and the other young Africans who were her travelling companions, arrived in Marrakech, Morocco.

Very quickly, her dream of working in a call centre turned into disillusionment.
What she hadn’t been told, and perhaps what her cousin didn’t know, was that call agents in Morocco were required to have two years of university credits.

For a time she lived with her cousin and his wife and while she was well treated, things were not necessarily easy.
She was witness to her cousin’s mugging and attack in a public street and feared the same would happen to her one day. “Moroccans on a scooter tried to steal his phone. He wanted to defend himself, but young Moroccans stabbed him. I saw the blood flowed and this image traumatised me,” she says with trembling voice.

She decided to return home and her parents, who by then knew of her presence in Morocco, paid for her return flight. Once home, with the advice and support of her family and relatives, Ndiaye pursued her studies once again.
She re-enrolled in university, and it was her second attempt to obtain her Bachelor of Laws.

“At the university, it was a bit like home, I was ashamed of the eyes of people and my classmates because they were all aware that I had stopped my studies to go to Morocco,” Ndiaye regrets.

A new beginning
But on a cold winter’s morning in November, and in the midst of a crowd of young students jostling to register at the university, we manage to force our way through the crowd to reach the main entrance of the Faculty of Law. It is here that Ndiaye’s professors and other UCAD staff gave her a chance. It is here that Ndiaye tried again to obtain her degree, this time succeeding.

“I received support from my teachers, especially one of my teachers who cheered me up whenever I needed it. She now sits at the Dakar court,” Ndiaye says excitedly.

As Ndiaye thrived with her studies, she was contacted by a friend, also a returnee migrant, who gave her the phone number of Mohamadou Ba, who is in charge of managing a community of returnee migrant volunteers in Dakar.

Ba is part of the Migrants as Messengers (MaM) awareness-raising campaign, which was developed by the International Organization for Migration (IOM).
The peer-to-peer messaging campaign trains returnee migrants how to interview, film and document the stories of their fellow returnees. They share their experiences through Facebook and on other social media sites, providing a platform for others to do the same.

When Ndiaye heard about it, she joined. She met with other returnee migrants and heard of their experiences and stories, as she shared her own. Because MaM is structured as a peer-to-peer campaign, it allowed Ndiaye and other returning migrants to structure a message for young people that was based on their own first-hand experiences “… the best thing is to stay at home or if you decide to travel, do it by a normal way.”

Support that goes beyond financial aid

Ndiaye is also glad for the support she received from the network. “We have gained confidence and hope. And this is much more important than financial aid,” Ndiaye says.

It is not just Ndiaye who has benefited from the training.

Yaya Mballo and Ndèye Fatou Sall are also returnee migrants in Senegal. Thanks to the IOM training they have been able to re-integrate into society and even launched their own business—where they offer public speaking and videography services.

Julia Burpee, Media Development Specialist and trainer at MaM tells IPS how the project has helped its participants transform.
“When we started the videography and storytelling trainings, many of the migrants who returned home from Libya and other countries, were too timid and ashamed to share their stories of migration.
“The more they stood in front of—and behind—the camera and saw the benefits of using video as a tool for healing and advocacy, the more they started to speak up. They now all speak confidently and with conviction about their migration experiences, eager to help inform other West Africans about the risks they faced, and ultimately, save lives,” Burpee says.

Tomorrow, Dec. 18, marks International Migrants Day and many of the returnee migrants will be celebrating it through events held around Dakar.

But today, Ndiaye is keenly interested in gender rights. In fact her Master’s dissertation was on the gender balance in Muslim succession law here in this West African nation.

“Inheritance law fascinates me the most because it is the regulation of everyday life and also it is a fact of society that is heard constantly,” she tells IPS.