Leire Gurruchaga Iraola is Gender Specialist at Educo, described as a global development and humanitarian action NGO with over 25 years’ experience working to defend children and their rights, and especially the right to an equitable and quality education. 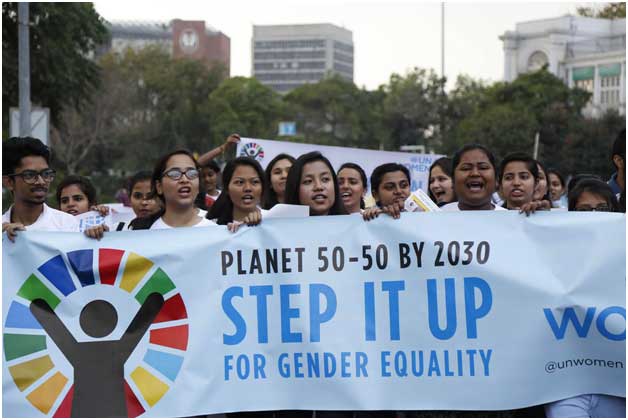 BARCELONA, Mar 4 2019 (IPS) - The data – with its sexism and its gaps – shows us that many of the barriers girls experience are determined merely by their gender.

This inequality, present in all societies, is by far the most widespread bias. At Educo we are determined, like the women and girls we work with, to put a stop to this injustice. And not just on International Women’s Day March 8, but every day.

During the next decade, 14.2 million girls under the age of 18 will be married each year. That’s 39,000 girls every single day. In Mali, where Educo works, 52% of girls are married before they turn 18.

Meanwhile, of the 57 million primary-school-age children out of education, 31 million are girls. In Bolivia, another country where Educo operates, women in urban centres have an average of 10.2 years in school, and in rural areas just 4.9 years.

Overall the most dangerous place for women is considered to be India, due to the high risk of sexual violence and slave labour. Educo has been present in India since 2009 working with some of the most vulnerable – but resilient – members of society, such as Priya Mitra.

Priya was spotted one day loitering in a red-light district in India’s Mumbai by a team from Prerana, a local NGO Educo supports. The seven-year-old had come to Mumbai from West Bengal with her mother, Neelam, after her alcoholic father died suddenly. Vulnerable, broke and in search of work, Neelam was sold into the sex trade.

The team made contact with Neelam through Priya. Three months after this first encounter, Neelam was attending regular life skills workshops for mothers, while Priya was enrolled in an education support program.

The project Priya attended was primarily focused on instilling in the children and mothers from red-light areas the importance of formal education.

The following year, Priya started school where she excelled receiving a scholarship, much to the joy of her mother. “I will support her education as long as she wants to study. I will stay in Mumbai and give her the best education I can,” says Neelam Mitra.

By the age of 11, Priya was an active member – and the youngest – of a children’s collective focused on equal participation and democracy. As well as her activism and volunteering at a local youth centre, Priya is a keen and skilled singer who was one of eight children selected for a cultural exchange program in Canada.

Receiving an education like this is critical for girls but is often overlooked due to deep patriarchal structures. In Mali, where child marriage as a tradition is being challenged, girls are particularly vulnerable to dropping out of school.

This means that despite government efforts to promote gender equity, the education gap between girls and boys remains wide.

In 2015, Educo in Mali set up a scholarship program aimed at primary-school-age girls, while their mothers learnt more about income generation and budgeting for school supplies.

The increase in these mothers’ economic capacity has not only enabled them to cover their daughters’ school costs but has improved their status within the family and community.

So far, over 2000 girls have benefited from this program, of which 95% have remained in primary school and 80% have gone on to secondary school. “The project officers give me a lot of courage because every day they come to my school with advice on how to study at home and how to be diligent in class,” says Fadimata Dramé.

This rural community in central Mali has subsequently changed in many positive ways for the women and girls there. Most notably, there has been a significant decrease in the number of child marriages and none of the girls involved in the scholarship program have been wed early.

Gender discrimination is enough of a hurdle for women and girls but add a disability into this mix of injustice and it is an even more difficult scenario. In Bolivia, 3 out of every hundred people has a disability. But this has not stopped Andrea Cornejo from achieving.

At 9 years old Andrea was diagnosed with spinal muscular atrophy type 2, a rare degenerative disease that took away the strength in her muscles. She had to wait until the was sixteen for an operation, which led to her becoming a wheelchair user.

This operation marked the before and after in her life. Aware of the discrimination women and girls faced in Bolivia already, she was now struck with the additional bias against people with disabilities.

It was not only these physical barriers, from schools to public transport not being wheelchair-friendly but also the sheer attitudes of so many people, that led Andrea to become an activist.

“Children and adolescents with disabilities must stop being seen as victims and become protagonists,” she says. In 2015 she was elected as a municipal councilor in Bolivia’s La Paz.

Like for Andrea, Educo’s work is built upon the belief that all children should have the opportunity to fulfill their rights, irrespective of their gender, ability or any other status. But as the data show us, girls and women are severely discriminated against across the world.

Promoting gender equity and the rights of women and girls is not only a question of social justice, but an inherent principle of the Universal Declaration of Human Rights and an essential requisite for achieving the Sustainable Development Goals.

We call for every woman and girl to have the right and the real possibility to decide and to build the future she wants for her body and for her life. We call for a diverse and colourful world in which pink and blue do not impose limits, where no one tells any woman or girl how far she can go today or any day.

* Some names have been changed