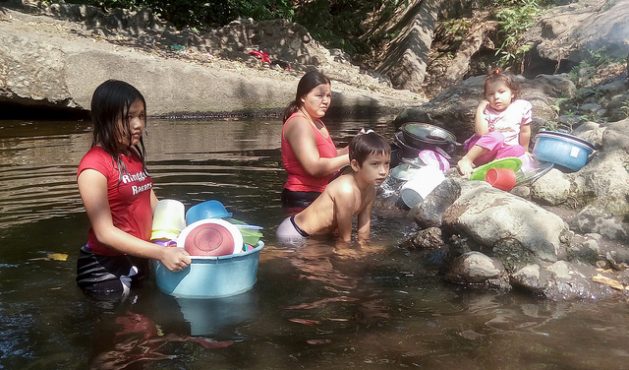 A mother washes kitchen utensils in the Aguas Calientes River, while her children play. She told IPS that this small river, part of the watershed of the Lempa River - the longest in El Salvador - always had an abundant flow, but now due to climate change and the use of water for the irrigation of sugar cane, the water level is down. Credit: Edgardo Ayala/IPS

“These are the collateral effects of climate change, as well as deforestation and monoculture,” the president of the Lempa Abajo Community Development Association, Patrocinio Dubón, told IPS.

Dubón is a native of San Carlos Lempa, a village in the eastern municipality of Tecoluca where the offices of the association – which administers a community water project that emerged 25 years ago – are located

Like other nearby villages, San Carlos Lempa includes the name of the Lempa River, which runs across more than 440 km of this small Central American country before flowing into the Pacific Ocean. It is the longest in El Salvador and is vital to the life and agricultural activity of a considerable part of the local rural communities.

These coastal lands, former cotton plantations, were parceled out and distributed to part of the recently demobilised guerrillas after the end of El Salvador’s 1980-1992 civil war.

Because the indiscriminate use of agrochemicals in cotton and later sugar cane had polluted the aquifers, residents of San Marcos Lempa stopped using that water and instead sought a cleaner source, which they found in a well located 13 km further north.

With the support of international development aid, they set up the community water project, which now supplies 26 nearby communities comprising some 2,000 families who would otherwise find it difficult to have access to piped water.

According to official figures, 95.5 percent of urban households have access to piped water, but the figure drops to 76.5 percent in rural areas.

The beneficiaries of the water project pay 5.65 dollars per month for 15 cubic metres, the amount needed to supply a family of six. With the installation of water meters in each household, it is possible to verify if consumption has increased, and the cost is added to the bill.

To access this community network, each family had to pay 389 dollars for the installation and other costs of the system, but if they did not have the money, they were allowed to pay the amount in six installments. 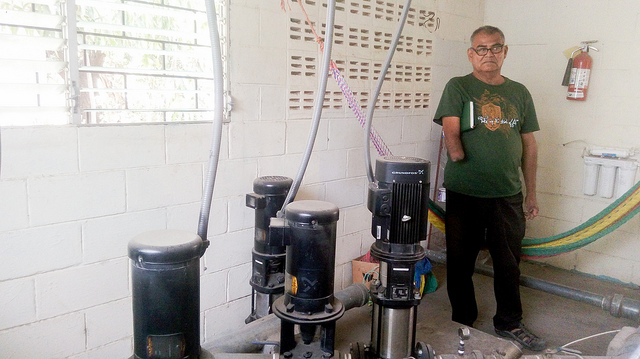 Patrocinio Dubón, a former guerrilla fighter who lost his right arm in a 1989 battle during El Salvador’s civil war, is the president of the Lempa Abajo Community Development Association, whose water project supplies San Carlos Lempa and 26 other villages in the municipality of Tecoluca, San Vicente department, in eastern El Salvador. Credit: Edgardo Ayala/IPS

Currently, about 70 percent of local residents are connected to the system, and the rest get their water from neighbors who are hooked up.

Threats to the community water system

However, the sustainability of the project is now at risk because the impacts of climate change, deforestation and sugarcane monoculture have hit the country’s watersheds, and this region is no exception, Dubón said.

The water level in the well that supplies San Carlos Lempa, he noted, has dropped almost three metres from the optimum level it was at a few years ago, which has made it necessary to adopt rationing measures.

“We have been rationing it for the past two years, serving different communities on different days,” he said.

A technical study will soon begin to be carried out, and “we are going to ration it even more,” Dubón added.

The sugar industry, whose primary raw material is sugar cane, is a powerful sector with influence on the economy and politics of this Central American country of 7.3 million people.

The Sugar Association, which represents the industry, is made up of six sugar mills, the majority of which are controlled by influential Salvadoran agribusiness families.

The sugar sector generates some 48,000 direct jobs and another 187,000 indirect jobs, and generates more than 186.5 million dollars in revenue, according to industry figures.

However, the industry has been under constant fire from environmental groups due to the pollution caused by the expansion of the crop, whether through the indiscriminate use of agrochemicals, excessive consumption of water for irrigation, or other harmful practices for the environment.

These include the burning of sugar cane to remove the outer leaves around the stalks before harvesting, to make it easier and faster for the thousands of sugar cane workers to cut the cane. But the fires pollute the environment.

However, the most worrying thing is the intensive use of water to irrigate the fields. 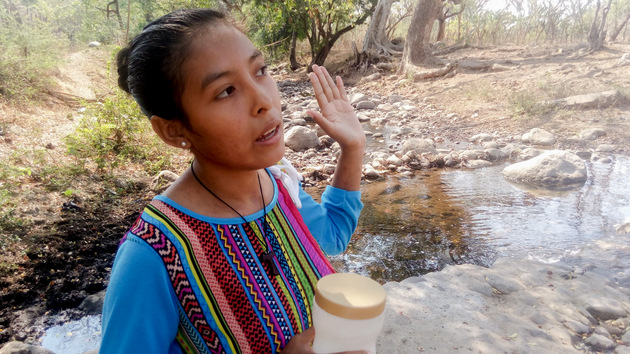 Silvia Ramírez shows how the water level has dropped in small rivers around the village of San Fernando in eastern El Salvador, due, among other reasons, to the excessive use of water by sugarcane producers, who build small dams to divert the water to their crops, affecting the surrounding rural communities. Credit: Courtesy of Edgardo Ayala

In a 2016 article, IPS focused on the impacts of the sugar cane industry on the way of life of peasant farmers and onl local ecosystems. At the time, the industry downplayed the effects and claimed that it irrigated just 15 percent of the 116,000 hectares dedicated that year to sugar cane.

The problems faced by the San Carlos Lempa water system are no exception.

In the village of San Fernando, also in the municipality of Tecoluca, the water supply has been affected by the same issues.

“We are rationing it to take care of it,” Silvia Ramírez, administrator of the Santa Mónica Water Board, told IPS.

Because the beneficiaries also manage their consumption through water meters, the local families “have learned to use it rationally,” she said.

In other municipalities in the country, which receive water from the state-run water company, faucets often run dry, even in households connected to the main water grid.
to the main grid, they often have no water.

Salvadoran media regularly report roadblocks by angry residents in urban neighborhoods or rural municipalities complaining about the lack of water.

The water conversation efforts of rural communities contrast with the decisions that Salvadoran legislators are reaching with respect to a controversial water bill, especially the article that stipulates the creation of a National Water Authority (ANA).

The lawmakers in the Environment and Climate Change Commission in the legislature reached an agreement on Mar. 18 that the industrial and agricultural sectors should participate in the board of directors of the new water authority.

The agreement, which was given a green light by eight of the 11 members of the legislative commission, has not yet been discussed or approved in the plenary session. But it does have the backing of all of the political parties represented in the commission, except for the ruling Farabundo Martí National Liberation Front, which steps down from power in June.

This means that, if the bill moves on to debate in the coming weeks, there is already a preliminary agreement for these influential sectors, with interests alien to those of the general population, to not only participate in the water authority, but also to control the decisions taken regarding water supplies.

The social movement, which began with protest marches during the week of International Water Day, celebrated on Friday, Mar. 22, argues that only public bodies should participate in the water authority.

“If we include these private sectors, which are only moved by the profit margin, it’s like the fox guarding the henhouse,” activist Marielos de León told IPS.

The ANA would consist of the Ministry of Environment and Natural Resources, the Ministry of Agriculture and Livestock, city governments, citizen water boards and the University of El Salvador, in addition to the two private sectors in question.