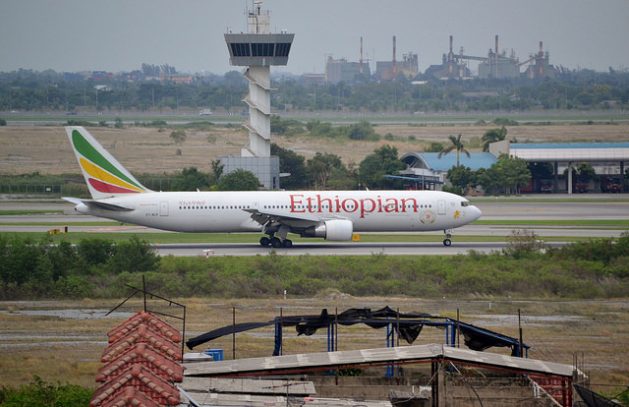 The Ethiopian Airlines plane was carrying 149 passengers and eight crew members, from 35 countries, when it took a nose dive six minutes after leaving the airport in Addis Ababa. Credit: Alec Wilson/CC by 2.0

UNITED NATIONS, Mar 12 2019 (IPS) - The United Nations headquarters is in mourning – and the UN flag is at half mast.

The deaths of 21 UN staffers March 10, on board an Ethiopian Airlines flight in Addis Ababa, is one of the biggest tragedies in the extended UN family—with a flashback to the deaths of 22 people, mostly UN staffers, who lost their lives in the Canal Hotel bombing in the Iraqi capital of Baghdad in August 2003.

The tragedy on Sunday had a wider impact because the UN staffers—enroute from Addis Ababa to Nairobi for the Fourth UN Environment Assembly March 11-15—were from 12 UN agencies and peacekeeping missions, plus representatives of civil society organizations (CSOs).

In the annals of UN tragedies, Dag Hammarskjöld of Sweden, the second Secretary-General of the United Nations (1953-1961), paid the ultimate price for peace when he died in a mysterious plane crash back in September 1961, which still remains unresolved after 58 long years.

Extending his deepest condolences to the families and loved ones of all the victims, to the government and people of Ethiopia, and all those affected by the disaster, he said: “Our colleagues were women and men—junior professionals and seasoned officials—hailing from all corners of the globe and with a wide array of expertise.”

They all had one thing in common, he said, “a spirit to serve the people of the world and to make it a better place for us all”.

UN spokesperson Stephane Dujarric said even though the plane crash in Ethiopia “ranks up there with one of the worst disasters that we’ve seen, what remains the highest toll were the 102 colleagues we lost in the earthquake in Haiti.”

There was also the attack on the Canal Hotel in Baghdad, in which 22 people were killed.  Seventeen UN colleagues were murdered in Algiers in 2007 during the attack there.

In 2011 a UN peacekeeping plane crashed in the [Democratic Republic of the Congo] with about 32 people on board, which was a mix of UN staffers and NGOs and contractors. This ranks extremely high in a very unfortunate ranking, Dujarric added.

In a statement released Monday, the World Food Programme, which accounted for the largest number of deaths, said it is in mourning for seven WFP staff members who lost their lives.

“ As we confront this terrible loss, we reflect that all these WFP colleagues were willing to travel and work far from their homes and loved ones to help make the world a better place to live in. That was their calling, as it is for the rest of the WFP family.”

The WFP said: “We also mourn the loss of our colleagues at other United Nations agencies and all of those who died in the crash. Among them was Victor Tsang, a former employee of WFP who moved to the UN Environment Programme (UNEP). We ask that everyone keep those who lost loved ones in their thoughts and prayers.”

Among the victims, he said, were UN staff members including one from FAO. “We are working to get in touch with family members and assist them in this time of tremendous pain”

The Ethiopian Airlines Boeing 737 Max 8 plane was carrying 149 passengers and eight crew members, from 35 countries, when it took a nose dive six minutes after leaving the airport in Addis Ababa.

At last count, the passengers, included 32 Kenyan citizens, 18 from Canada, nine from Ethiopia, eight from Italy, China and the US, and seven from the UK and France.

Ian Richards, President of the 60,000-strong Coordinating Committee of International Staff Unions and Associations (CCISUA), told IPS: “Our colleagues are devastated by the loss of life in yesterday’s plane crash.”

He said many knew the victims or were familiar with their work.

“With every hour that passes we are learning more about the amazing things they were doing to make this world a better place, whether working on the environment, migration, humanitarian or other areas, and we won’t forget this.”

“Naturally our thoughts are with their families at this time and we will work with administration to make sure they get all the assistance they need,” Richards added.

At the opening of the UN assembly in Nairobi, delegates paid their respects with a moment of silence, according to press reports from the Kenyan capital.

Siim Kiisler, the Estonian environment minister, said: “We have lost fellow delegates, interpreters and UN staff.” “I express my condolences to those who lost loved ones in the crash.”

Among those who died were delegates from the African Diaspora Youth Forum in Europe, the US-based Save the Children and the Norway-based Association of Arctic Expedition Cruise Operators.

Also on the flight was Isabella Beryl Achie, from Homabay county about 300 kilometres west of Nairobi. She had been travelling home from Egypt where had recently facilitated a seminar.

Meanwhile, the Kenyan and Ethiopian governments are planning to fly family members of the victims to Addis Ababa as plans to identify their remains get underway. In a joint press statement, Kenya’s Transport Cabinet Secretary James Macharia and Ethiopian Airlines’ Kenya country manager Yilma Goshu said that the government has reached out to the families of 25 of the 32 Kenyans who perished in the Sunday morning crash.

Ethiopian Airlines also announced on Monday that the black box of the ill-fated flight had been recovered as efforts to piece together clues as to what may have happened to the plane begin.