Patrick Amir Imam is the Resident Representative of the International Monetary Fund (IMF) in Zimbabwe & Kangni Kpodar is Deputy Division Chief in the IMF’s Strategy, Policy, and Review Department and senior fellow at the Foundation for Studies and Research on International Development in Clermont-Ferrand, France. 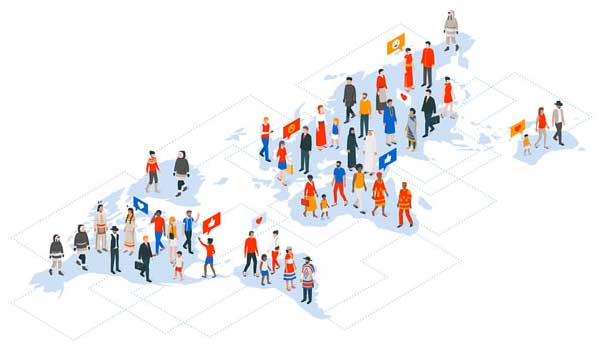 WASHINGTON DC, May 16 2019 (IPS) - The notion of citizenship has evolved over time. Historically, allegiance was typically to an ethnic group or a feudal lord. With the birth of the nation-state in the 19th century came the need to distinguish between those who belonged to the state and those who didn’t, and therefore to create a legal distinction between nationals and foreigners.

Most countries established then, or at independence, a “code of nationality” whose basic principles are still intact today. This code, in most cases, defines who is a national and how citizenship can be acquired.

Citizens benefited from such rights as voting, the ability to move freely within the country, and the eligibility to work. They also had responsibilities, such as serving in the military, paying taxes, and voting.

The modern notion of citizenship contrasts two visions. One vision, based on the declaration of human rights, is inclusive and can extend nationality to anyone meeting certain conditions. The other view, more exclusive, defines a nation more as an ethnic community. Specifically,

The inclusive vision is reflected in the law of the soil (jus soli), the principle that a child born within a country’s territory automatically acquires that country’s nationality. In this view, often found in the New World, bonds of citizenship extend beyond blood ties and encompass people of different genetic and geographic backgrounds.

This provides the basis for an inclusive system, which ensures that newcomers and their children are assimilated and can easily obtain citizenship.

The exclusive vision of the law of blood (jus sanguinis) is based on the principle that children acquire nationality from their parents, regardless of their place of birth. This is commonly the case in much of Asia and Europe and in parts of Africa.

This form of citizenship is more ethnocentric and by definition less inclusive: citizenship derives meaning, in part, by excluding noncitizens from basic rights and privileges. In such cases people can belong to a family that has lived in a country for generations and still not be citizens of their native land. 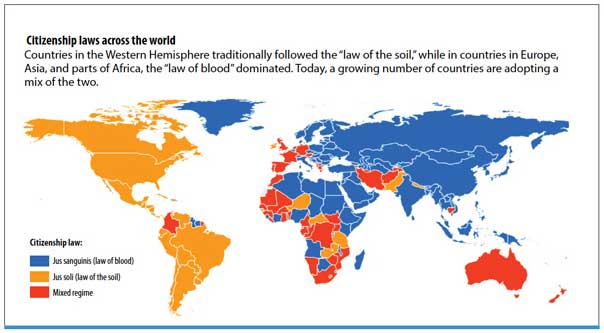 A growing number of countries are adopting citizenship laws that are a mix of the two. Whereas countries often initially adopted either jus soli or jus sanguinis rules, many countries have recently changed their policies to move toward the other vision.

On the other hand, countries such as the United Kingdom have tightened the rules of jus soli and do not automatically grant citizenship to people born on its soil. The chart (next page) illustrates the distribution of citizenship laws across the world.

In continental Europe, jus soli has historically been the dominant choice, a reflection of the feudal tradition linking people to the lord on whose land they were born (Bertocchi and Strozzi 2010).

Most European nations drafted citizenship laws according to this model during the 19th century, as did Japan, which modeled its constitutional law on that of continental Europe.

France is an exception. The French Revolution broke this feudal link, and jus sanguinis prevailed. At the end of the 19th century, France reverted to jus soli to beef up its population, after losing the war against Prussia, and to integrate foreign communities, a step that would make for a strong military. The British, however, kept jus soli at home and throughout the British Empire.

Countries such as the United States chose jus soli, as would be expected in a country of immigrants. With the specific aim of protecting the birthright of black slaves, the US Constitution’s 14th Amendment in 1868 encoded the jus soli principle.

The relatively limited benefits of US citizenship versus US residency— a topic relevant to more than the United States, which deserves separate consideration—also meant limited fiscal costs of providing citizenship to a newcomer and the potential upside of an extra worker. (The cost of education fell on the migrant’s home country; see Bertocchi and Strozzi 2010).

In colonized countries, citizenship laws were in general initially transferred from the colonial power (Bertocchi and Strozzi 2010). Countries with a strong national identity, such as China, Egypt, and Japan, typically make it hard to acquire nationality or obtain a second passport.

Other countries— particularly newer Western Hemisphere countries—typically make it easier to be naturalized.

Because many countries were artificially formed without consideration for local ethnic diversity, leading to political instability, jus sanguinis was thought to bolster national identity.

Such was the case in Sierra Leone, for instance, where the 1961 Constitution limited citizenship to transmission by descent, and only for those with black-African fathers and grandfathers. But in a heterogenous ethnic environment with forced migration the law excluded various ethnic and tribal groups, causing alienation and conflict, especially in the context of weak institutions.

The Congolese Constitution of 1964, for instance, in an effort to exclude Rwandan immigrants, recognized as citizens only those whose parents were members of tribal groups established within the territory before 1908 (see Bertocchi and Strozzi 2010). Predictably, the marginalization of certain groups—and in some cases the creation of de facto stateless people who would later rebel—was a consequence.

How do citizenship rights affect economic development? The data vividly illustrate the striking difference in the average real GDP per capita in jus soli countries versus non–jus soli developing economies.

Why the difference? Citizenship laws can be thought of as conflict-resolving or conflict-generating institutions. If inclusive, they can provide positive social capital, raising trust, cutting transaction costs, and reducing the probability and intensity of conflict.

This is especially true when other conflict-resolution institutions lack teeth (for example, government is corrupt or the courts are weak), as in most developing economies. In principle, jus sanguinis makes integration more difficult and hence hurts economic development.

There are several channels:

Distorting (and reducing) investment: Investors who lack the prospect of obtaining citizenship have shorter time horizons, are mindful of excessive exposure to one country, and become wary around election times—they are particularly vulnerable in countries with weak institutions.

In addition, their investment is distorted. If people’s property rights are not well protected because they lack local citizenship, the focus will be on investment with a quick payback or requiring limited capital. In Cambodia and Madagascar, for example, foreigners may not purchase land, which restricts investment.

Political instability and corruption: Minorities without citizenship are often at polar extremes—either excluded from economic life or playing a disproportionately significant role in the local economy. Without citizenship, the marginalized minority cannot vote or impact public life through democratic means. One way for disenfranchised groups to draw attention to themselves is through protests or violence.

This may spur governments to suppress these minorities, possibly increasing military spending and weakening growth as a result. Conversely, when a nonnational group plays a disproportionately significant role in economic life, its lack of protection by the state is a source of concern.

Because of their vulnerability, influential minorities are motivated to influence the political process and may resort to bribes, which encourages corruption and weakens institutions.

Distorting the labor market: Under jus sanguinis, noncitizen local minorities may be excluded from parts of the labor market. In many countries, immigrants are barred from entire professions. For instance, in Thailand foreigners cannot become hairdressers or accountants.

In France, people from outside the European Union are not allowed to become directors of funeral companies. In these cases, jus soli expands the labor market in a way that jus sanguinis law does not—potentially broadening the labor pool and boosting the economy’s efficiency.

We found that in developing economies, particularly when institutions are weak, citizenship laws matter: jus soli, which is more inclusive in nature and encourages assimilation and integration, has a statistically significant and positive impact on income levels.

Per capita income in countries that switched to jus sanguinis was lower in 2014 (by about 46 percent) than it would have been if they had kept jus soli after independence, our results suggest.

Moreover, our research found that in jus sanguinis countries, the income gap with jus soli countries could be reduced by easier access to citizenship through marriage and naturalization. This suggest some substitutability among the paths to citizenship.

The debate over citizenship laws has been raging for the past few years—not just in developed economies but in those that are developing as well. We illustrate that such laws have a more material impact on development in lower-income countries, partly because their institutions are weaker and don’t necessarily counterbalance the negative impact of exclusive citizenship laws.

The policy implications are clear, though nuanced. At a time when developing economies increasingly send emigrants and receive immigrants, integrating these populations effectively can spur economic development.

In former colonies in particular, jus sanguinis has hurt development. All else equal, switching from jus sanguinis to jus soli can potentially enhance integration and boost economic growth.