Mawethu Nkhosana is an LGBTI activist and the crisis response fund administrator at CIVICUS, a global alliance of civil society organisations. 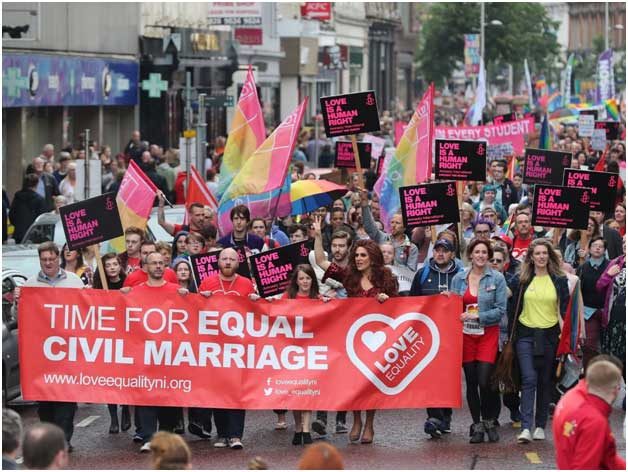 BUCHAREST, Romania, May 3 2019 (IPS) - Romanian Adrian Coman and his American-born partner Clai Hamilton had two major reasons to celebrate when they tied the knot last June.

One of course, was their marriage. The other was the historic legal victory they scored when their case before Court of Justice of the European Union (CJEU) led to the recognition of same sex marriage for the purpose of freedom of movement in the European Union (EU).

The couple had married in Belgium in 2010 and later decided to settle in Coman’s native Romania. But Hamilton was denied residency rights because the civil code does not recognise same-sex marriages. So, they took the matter to the Romanian courts, which referred it to the CJEU.

Romania currently ranks 35th out of the 49 countries assessed by the European region of the International Lesbian, Gay, Bisexual, Trans and Intersex Association (ILGA-Europe,), in terms of its equality laws and policies.

Romania compares fairly favourably – when it comes to protecting and promoting LGBTQI rights – to many other Balkan states. But there is an apparent disconnect between the Romanian government’s intentions and public opinion.

While the government adopted anti-discrimination legislation in 2000 and decriminalised consensual same-sex relationships the following year, it did an about-face in 2008 when it changed the civil code to ban same-sex marriage and civil partnerships. But 10 years later, referendum voters rejected an attempt to enforce this prohibition at the Constitutional level.

In this, Romania is not alone. Uncertainty over LGBTQI rights manifests in a variety of ways across the Balkan region, a massive swathe of territory stretching across Eastern Europe from Turkey in the south to Romania in the north.

This uncertainty is a breeding ground for further discrimination, the non-implementation of more liberal civil regimes and the official apathy toward the commission of crimes against members of the LGBTQI community.

For example, in 2015, Slovenia’s parliament passed a same-sex marriage bill with a vote of 51-28. But Slovenians disagreed: nine months later, they rejected the new law in a referendum, by a margin of 63% to 37%.

Across the Black Sea from Romania, an incident in Armenia demonstrated the challenges that still lie ahead for LGBTIQ rights in this general part of the world. This week, around 100 demonstrators gathered outside the national assembly in the capital, Yerevan, to protest a speech in parliament by a transgender activist. Lilit Martirosyan’s address at a hearing organised by the United Nations and the Armenian Human Rights Defender’s Office. While fuelled by party politics, the protests were clearly transphobic.

In some places a more liberal legal framework has been established but greater tolerance is not guaranteed. Croatia passed the Life Partnership Act in 2014, granting same-sex couples the same rights as their heterosexual counterparts – except for adoption, although a parent’s life partner can become a child’s partner-guardian.

This was despite an opinion poll the previous year, showing that almost 60% of Croats thought that marriage should be constitutionally defined as being between a man and a woman. This raises questions around the enforceability and public acceptance of the Life Partnership Act.

Greece presents a more extreme example of public opinion rising against political decisions. Despite its parliament approving civil unions for same-sex couples in a landslide 194-55 vote four years ago, when polls showed that only a third of citizens supported such a reform, public attitudes toward the LGBTQI community remained hardened.

In its 2019 review of LGBTI rights, ILGA-Europe reports the prevalence of homophobic and transphobic speech in Greece, in particular by clergy. It notes also the an International LBTQI youth and student organization ranks Greece as one of the least inclusive countries around LGBTQI issues in education.

The ILGA-Europe review also describes the shocking 2018 murder of LGBT+ and HIV activist Zak Kostopoulos, who was fatally beaten by an Athens jewellery shop owner, a second person and police officers.

Despite videos of the incident being made public, the media made later-discredited claims that he had been trying to rob the shop and had been under the influence of drugs.

The other side of the coin is where authorities, even when they are not backed by legislation, foment hatred and violence toward the LGBTQI community – as in Turkey, where homosexuality has been legal since 1858, although sexual orientation, gender identity and same-sex relationships are not recognised in civil rights laws.

In November 2017, Turkish President Recep Tayyip Erdoğan declared the empowering LGBT people to be “against the values of our nation”. A week later, the governor’s office in the capital, Ankara, banned all LGBT cultural events in that city.

Deep-seated prejudice towards the LGBTQI community in the Balkans – in contrast to Western Europe, where studies and polls consistently show more liberal attitudes – have been further inflamed by the influx over several years of refugees from conflict zones in the Middle East.

LGBTQI refugees from countries like Iraq and Syria escape sexual orientation or gender discrimination and persecution in their homelands, only to face it once again in the Balkans.

Fearful, many do not report their sexual orientation or gender identity when applying for refugee status. This invariably leads to their applications being rejected and them being repatriated to their home countries.

If they stay, or move to another country, their illegal status means they are often forced to support themselves through high-risk occupations such as sex work. And because they enjoy no legal rights, they are at risk of official persecution and have no recourse should they be victimised by the general public.

The win for LGBTQI rights in the Coman-Hamilton judgment is without doubt important, and it stands proudly among other small victories in the Balkans region. But what positive changes there have been are incremental, and often negated by continued prejudice and a lack of will to implement reforms.

Until public and official attitudes undergo a paradigm shift in every one of the Balkan states – irrespective of whether or not their civil regimes are currently transforming – the region’s LGBTQI community will continue to be denied basic human rights and disproportionately suffer indignity, discrimination and violence.