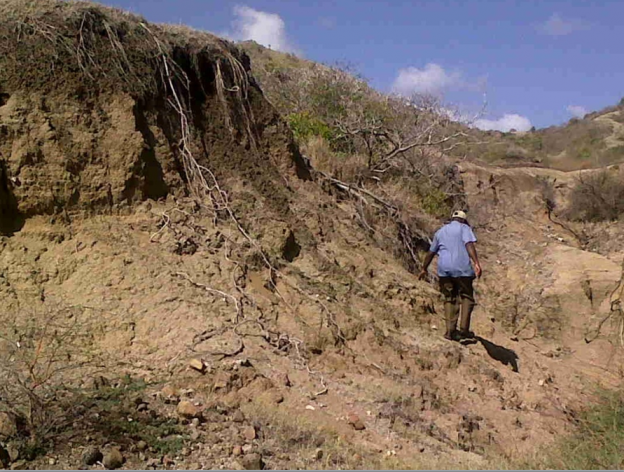 Grenada has been spearheading the fight against desertification at local, regional and global levels. Credit: Desmond Brown/IPS

ANKARA, Jun 18 2019 (IPS) - Businesses are being encouraged to follow the lead of the youth to halt desertification, reduce degradation, improve agricultural sustainability and restore damaged lands.

“The youth is a very particular case. The youth give me a lot of hope because I see their passion, and I see their vision,” head of the United Nations Convention to Combat Desertification (UNCCD) Ibrahim Thiaw told IPS.

“For the youth it’s basically ‘I care for the planet, this is our future.’”

Each minute, 23 hectares of productive land and soil is lost to desertification, land degradation and drought, according to U.N. Environment.

Thiaw said when this happens young people are forced to leave their homeland, and most never return.

He said restoring land will help in reducing risks of irregular migration – a major component of population change in some countries.

According to a new U.N. Department of Economic and Social Affairs’ Population Division report launched on Monday, Jun. 17, between 2010 and 2020, 14 countries or areas will see a net inflow of more than one million migrants, while 10 countries will see a net outflow of similar magnitude.

“What is left for the young girl or young gentleman of Haiti if 98 percent of their forest have been degraded and they have barren hills that cannot generate food anymore? What is left for them to do but to flee?” Thiaw questioned.

“Therefore, restoring land would reduce migration, it will keep people on the ground, help them generate their own income and live their own lives. They don’t want to leave their families. They migrate because they have no choice. So, restoring land is also bringing stability in our countries.”

As countries observed World Day to Combat Desertification and Drought (WDCDD) on Monday, Jun. 17, Grenada’s Minister of Agriculture and Lands Yolande Bain-Horsford said while soils and land continue to play an integral role in the economic shift the island nation is experiencing today, these resources are under threat.

“The agricultural sector is a major contributor to national development through the provision of employment, household income, food and government revenues,” Bain-Horsford told IPS.

“As we boast of the importance of this sector to our economies, unfortunately we must face the harsh reality of the challenges facing the sector, which include land degradation, lack of sustainable farming practices, climatic variations and droughts.”

Bain-Horsford said Grenada has been spearheading the fight against desertification at local, regional and global levels.

Locally, the island nation has set ambitious targets to ensure it addresses and, in some cases, reverse the impacts of negative agricultural, construction, and other actions which lead to desertification.

Some of the actions taken include the Cabinet approving Grenada’s Voluntary Land Degradation Neutrality targets that should be achieved by 2030.

To achieve the targets, Grenada has agreed to;

The island also completed and submitted its 2018 National Report on the state of land degradation, nationally linking it to gender and the Sustainable Development Goals 2030.

But Thiaw said land restoration cannot be left in the hands of governments alone, explaining that it will not be sufficient.

With two billion hectares of land in need of restoration, the UNCCD head said the best solution would be for the governments to not only mobilise communities, but to mobilise private investments.

“As long as business does not see that investing on land and restoring land is a good business case, it will not happen,” Thiaw said.

“Governments will have to review some of the land tenure systems that they have. It may be just a concession saying if you restore this land, I will give you the concession over the land for the next 50 years or for the next 60 years. Then they can harvest and they will leave the land restored rather than leaving it barren.”

The government of Turkey is hosting three days of activities in observance of the 25th anniversary of the UNCCD and the WDCDD.

“This danger is indeed more dangerous and more insidious than wars,” he said. “This danger that takes our lands away, makes them unusable and risks our future is nothing but desertification.”

Pakdemirli said just as desertification is a disaster that threatens the entire world regardless of national borders, degraded and destroyed lands pose a direct threat to the lives of people living on land-based activities.

He said these social problems sometimes force people to migrate, especially in countries such as Africa that are most affected by the consequences of desertification.

“Nobody wants to leave the land where they were born, grew up, and felt belonging to. Migration is a way to addressing the most desperate and needy situations,” Pakdemirli said

“In such cases, children and women are viewed as the most vulnerable category of victims. Therefore, before it is too late, we should take necessary measures before lands lose their productivity and become completely uninhabitable.

“While taking these measures, we must act in unison and adopt the principle that all lands around the world should be protected,” Pakdemirli added.