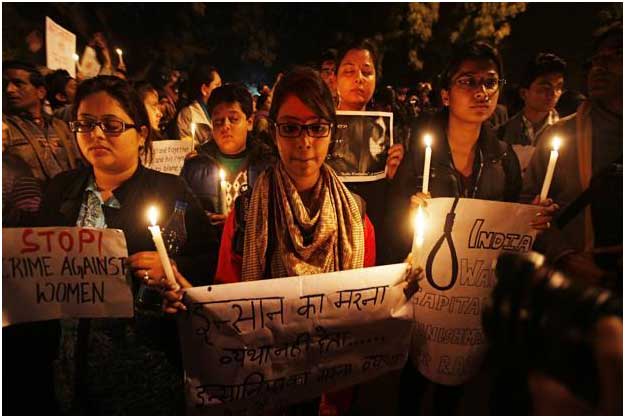 NEW DELHI, Jun 28 2019 (IPS) - Early in 2018, India was shaken by the horrific details surrounding the abduction, gang rape, and murder of an 8-year-old girl in Kathua, a district in the north Indian state of Jammu and Kashmir.

The case is one of a string of brutal rapes to attract widespread media attention in a country where sexual violence against women and girls is commonplace.

According to India’s National Crime Records Bureau, around 100 sexual assaults are reported to police every day. Shocking though that is, the actual number of attacks is far higher, with a government survey finding that 99.1% of sexual violence cases go unreported, often due to pressure from family members.

Even in cases that do that make it into the criminal court system, justice for victims is often hard to obtain. In the Kathua case, the young victim was a Muslim from the poor nomadic Bakarwal tribe and the eight accused are part of the local majority Hindu community.

In many areas across India, political tensions run high between Muslims and Hindus and the public reaction to the murder investigation soon became embroiled in bitter sectarian divisions.

Widespread protests were held across the country with supporters alleging the men were innocent targets in an anti-Hindu plot instigated by biased Muslim investigators.

Numerous attempts were made to disrupt the police investigation and thwart legal processes. Some even resorted to death threats and attacks against the prosecution lawyers, witnesses, and victim’s family.

The Bakarwal community which they were members of came under sustained attack and the family was forced to flee the village where the assault occurred.

The situation became so dangerous that the Supreme Court decreed that a fair trial could not take place in Jammu and the case was moved to Pathankot in the neighboring state of Punjab to ensure impartiality in the legal process.

Against this backdrop, the judgment of the Special Court on 10 June 2019 came as a relief to many. Six out of the seven men charged were found guilty, with three sentenced to life in prison for gang-rape and murder, and three given five years for destroying evidence in order to protect the perpetrators. A seventh man was acquitted and an adolescent is yet to stand trial.

On a positive note, the Special Court pronounced judgment within a year of starting the trial, which is a rare achievement in India’s overburdened criminal justice system. While this is definitely laudable, the fact that justice was finally delivered (subject to appeal) in the Kathua case must not overshadow the many obstacles that had to be surmounted in reaching this acceptable conclusion.

Rather, it should be seen as an illustration of the many impediments faced by thousands of survivors of sexual violence across India, especially those from marginalized communities including Muslims, Dalits, and Adivasis.

Unfortunately, the speedy and effective justice delivered by the Special Court in Pathankot does not represent the experiences of the vast majority of survivors, and a fair and swift trial in cases of sexual violence remains the exception, rather than the norm.

In 2016 – the last year for which official statistics are available – there were 133,000 cases of sexual violence pending trial and conviction rates remain abysmally low.

The Unnao rape case is another recent high profile example in which a victim from a marginalized group is pitted against those who are more powerful. In this instance, an elected official from the ruling government party stands accused, alongside others including his driver, of raping a girl from the Dalit community.

The rape survivor attempted to set herself on fire in front of the state Chief Minister’s residence merely to get her criminal complaint registered. Her legal battle is ongoing and a criminal complaint for fraud has been filed against her by the parent of one of the men charged with rape in the case.

Meanwhile, her father was taken into police custody, allegedly after he was assaulted by supporters of the accused, and died shortly after, with a medical examination finding injuries consistent with him having been beaten.

So whilst we celebrate the verdict in the Kathua case, we must remember that every day in India, women and girls who have experienced sexual violence and assault are confronted with intimidation, threats, and coercion that inhibits them from reporting their violation or forces them into settling or dropping their cases.

Facing even greater obstacles to accessing justice are those who are subjected to additional discrimination on the grounds of class, caste, religion, or disability.

In 2014, the United Nations Committee on the Elimination of Discrimination against Women (CEDAW) expressed concern about the escalation of rapes against women and girls in India, particularly on the basis of caste, and the downplaying by key state officials of the grave criminal nature of gender-based sexual violence.

The situation has, however, failed to improve. In April 2018, over 600 academics from India and abroad joined together to write an open letter to the Indian government, pointing out the rapes and lynchings appeared to be a targeted campaign against minorities and expressing anguish over the lack of action by the Indian government.

India’s criminal justice system remains inaccessible and insensitive to most survivors of sexual violence. These survivors face barriers in getting their cases registered with the police, have inadequate legal support, and are forced to wait years to have their cases heard.

Immediate, systemic change is needed to ensure expeditious trials and day-to-day hearing of cases, such as took place in the Kathua trial. Justice needs to be done and be seen to be done so that all survivors of sexual violence can place their faith in the legal system, safe in the knowledge that they will be heard and their claims treated seriously.

The onus is now on the Indian government to move beyond token action and ensure that the criminal justice system is responsive to survivors needs and is equipped to handle the high volume of sexual violence cases that are currently pending.

To achieve positive systemic change, state officials should work in close cooperation with civil society organizations, activists, and survivors who can provide invaluable insight and expertise.

Better implementation of existing laws, the introduction of much needed procedural reforms, and clearing the large backlog of cases pending in criminal courts, are all key. So is handling sexual violence cases with greater sensitivity, a more accountable police force, and bigger budgetary allocation by the government to end gender-based violence.

This includes giving sufficient funding to women’s rights organizations that are delivering vital support services at the grassroots to women and girls.

There is much to be done but if these important and long overdue improvements can be implemented, it means something positive can come from the tragedy of the Kathua case.

About Equality Now: Equality Now is an international human rights organization that works to protect and promote the rights of women and girls around the world by combining grassroots activism with international, regional and national legal advocacy. It’s international network of lawyers, activists, and supporters achieve legal and systemic change by holding governments responsible for enacting and enforcing laws and policies that end legal inequality, sex trafficking, sexual violence, and harmful practices such as child marriage and female genital mutilation. For more information go to www.equalitynow.org.