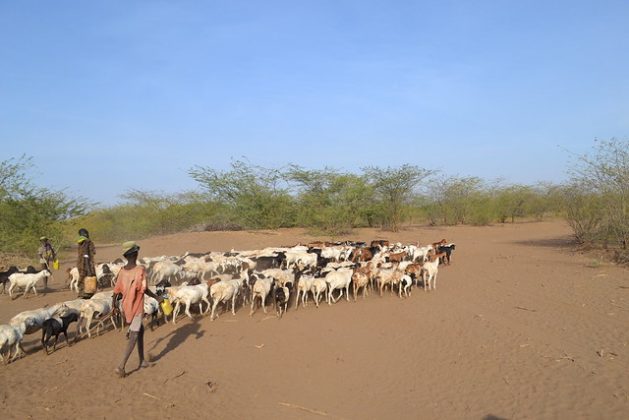 Research shows goats and sheep populations in Kenya have increased as the country’s temperatures have increased, in some places above 1.5˚C. Credit: Isaiah Esipisu/IPS

NAIROBI, Jul 18 2019 (IPS) - Kenya’s getting hotter. Much hotter than the 1.5˚C increase that has been deemed acceptable by global leaders, and it is too hot for livestock, wildlife and plants to survive. Thousands of households, dependent on farming and livestock, are at risk too.

This is according to researchers who presented the Kenyan government with the findings of their study titled ‘Harnessing opportunities for climate resilient economic development in semi arid lands: Adaptation options in key sectors (with focus on livestock value chain)’.

According to their findings, the thermometer has been climbing steadily upwards across this East African nation’s entire 21 arid and semi-arid counties, with the temperature in a few counties already surpassing the 1.5°C above pre-industrialised levels that research that has predicted would be reached between 2030 and 2052.

All the increases were recorded over the last five decades.

During the 21st round of climate change negotiations under the United Nations Framework Convention on Climate Change in Paris in 2015, all countries committed under the Paris Agreement to “holding the increase in the global average temperature to well below 2°C above pre-industrial levels and pursuing efforts to limit the temperature increase to 1.5°C.”

In 2018, the Intergovernmental Panel on Climate Change released a special report warning that without urgent changes to slow down the global warming, the world would face the risk of extreme heat, drought, floods and poverty at a temperature rise of 1.5°C.

The Kenyan study today noted that humans were already feeling the impact of these increased temperatures as over the last four decades the livestock in some counties have declined by almost a quarter of the overall livestock population because of the temperature increase over this time.

“In all the 21 counties, we observed a 25.2 percent decline in cattle population between 1977 and 2016, and this is directly linked to the increased heat,” Dr Mohammed Yahya Said, the lead investigator and a consulting scientist at Kenya Markets Trust, which conducted the research, tells IPS.

“This is a very disturbing statistic especially for a pastoral community whose main livelihoods are derived from livestock,” remarks Said.

It is statistic that Eunice Marima, a pastoralist from Kenya’s Narok County has lived through.

“This is something I have witnessed over the years,” Marima tells IPS. She vividly recalls how her father, who then lived in Kajiado County which borders Tanzania, and lies 21 kilometres south of Nairobi, lost a herd of 3,000 cattle in December 1962.

And she clearly remembers how many more people have lost thousands and thousands of animals in the subsequent years. Her cattle have not been spared either because in the 1984 and 1994 droughts she lost 210 and 88 animals respectively.

“I have learned my lesson, and now, I have 90 acres of land where I usually plant Boma Rodhes grass whenever it rains,” she tells IPS. She explains that she harvests the grass to make hay, which she uses to feed her animals during drought. “This is my new adaptation method, and as a result, following the 2017 drought, I did not lose any animal,” she says.

According to the new study, the most affected county was Turkana, which recorded a temperature increase of 1.8˚C over the last half century with a resultant sharp decline in its cattle population, which by almost 60 percent between 1977 and 2016.

“However, our study found something else these communities could hang on to,” Said explains.

The same study reveals that the changing climatic conditions have at the same time presented opportunities that could be explored to realise the government’s development agenda.

“These are very important findings for the country especially now that we are working towards the realisation of the ‘Big Four’ development agenda,” said Mwangi Harry Gioche, the Director of Agriculture Research and Innovation at the Ministry of Agriculture, Livestock Fisheries and Irrigation, who received the findings on behalf of the Principal Secretary for Agricultural Research, Professor Hamadi Boga.

The ‘Big Four’ is a four-point agenda by President Uhuru Kenyatta, outlining what he will be focusing on in his last presidential term, which ends in 2022, to improve the living standards of Kenyans, grow the economy and leave a lasting legacy. The agenda items include food security, manufacturing (mainly focusing on job creation in this area), affordable universal health care and affordable housing.

According to Professor Nick Ogunge, who represented the University of Nairobi at the research dissemination event, the information is very crucial for the formulation of policies that are responsive to the prevailing climatic conditions.

Said explains that according to projections, temperatures are most likely to increase even further, which called for informed preparedness. He did not say how much higher the temperature would rise.

“Climate change is already happening and research shows there are possible ways of adaptation,” Dr. Olufunso Somorin from the Africa Development Bank said during presentation of the findings in Nairobi. “However, countries have been using such important data to develop policies and strategies which are never implemented.”

Somorin challenged the government of Kenya to use the new data positively for the wellbeing of communities in the ASAL counties.

The scientists observed that if the country took advantage of such information to invest in the livestock value chain in the correct ecological zones, then the country could easily become a net exporter of livestock and livestock products.

Kenya is on record as being the fifth-largest livestock producer in Africa, and most of the animals are found in the ASALs. However, the country loses millions of the animals during droughts, making it meat-deficit country. So far, most of the meat eaten in Kenya is imported from Ethiopia, Somalia, Tanzania and Eritrea.

“Nearly all pastoralists keep cattle as a hobby and as a symbol of wealth, and when drought comes, they lose so many animals,” says Marima.

“Time has come for us to face the reality.”