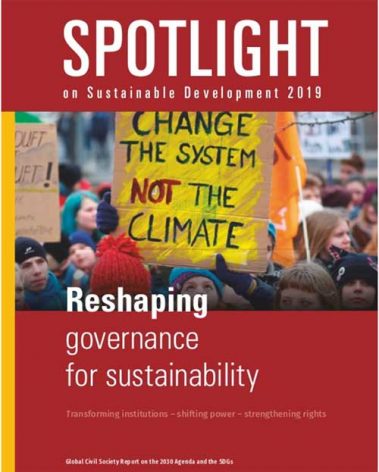 BONN, Jul 8 2019 (IPS) - When UN Member States adopted the 2030 Agenda and its SDGs in September 2015, they signalled with the title Transforming our World that ‘business as usual’ is no longer an option and fundamental changes in politics and society are necessary.

Four years later they have to admit that they are off-track to achieve the SDGs. The global civil society report Spotlight on Sustainable Development 2019 shows that in many areas there is no progress at all, and in some even regression.

Destructive production and consumption patterns have further accelerated global warming, increased the number of extreme weather events, created plastic waste dumps even in the most isolated places of the planet, and dramatically increased the loss of biodiversity.

Fiscal and regulatory policies (or the lack of) have not prevented the accelerated accumulation and concentration of wealth but have only made them possible, and thus exacerbated social and economic inequalities.

Systemic discrimination keeps women out of positions of power, disproportionately burdens them with domestic and care-giving labour and remunerates their formal employment less than it does that of men.

… but there are signs of change

Despite these gloomy perspectives, there are signs of push-back. In response to the failure or inaction of governments, social movements have emerged worldwide, many with young people and women in the lead.

They do not just challenge bad or inefficient government policies. What they have in common is their fundamental critic of underlying social structures, power relations and governance arrangements.

Thus, the implementation of the 2030 Agenda is not just a matter of better policies. The current problems of growing inequalities and unsustainable production and consumption patterns are deeply connected with power hierarchies, institutions, culture and politics. Hence, policy reform is necessary but not sufficient. Meaningfully, tackling the obstacles and contradictions in the implementation of the 2030 Agenda and the SDGs requires more holistic and more sweeping shifts in how and where power is vested, including through institutional, legal, social, economic and political commitments to realizing human rights.

In other words, a simple software update (of policies, norms and standards) is not enough – we have to revisit and reshape the hardware of sustainable development (i.e. governance and institutions at all levels). 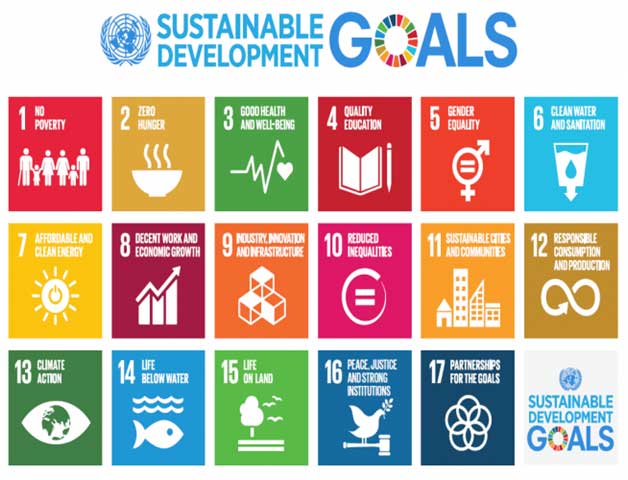 Re-visiting the hardware of sustainable development has to start at the local and national level. While most governance discourses emphasize the democratic deficit, gaps and fragmentation in global governance, the major challenge for more effective governance at the global level is the lack of coherence at the national level. Therefore, it is necessary to strengthen bottom-up governance.

Bottom-up governance refers not only to the direction of influence from the local to the global. It also calls for more governance space to be retained at local and sub-national levels.

It enables, for instance, indigenous peoples, small farmers and peasant communities to exercise their rights in retaining their seeds, growing nutritious foods without genetically modified organisms, and accessing medicines without paying unaffordable prices set by transnational companies and protected by intellectual property rights.

The same is true for universal access rights to social protection. Social protection needs to be owned and governed by sub-national and national governments with fiscal space created in national budgets.

Universal, free access to essential public services are the foundation blocks of the SDGs and at the core of local governments’ commitment to the 2030 Agenda.

However, the privatization of public infrastructure and services and various forms of public-private partnerships (PPPs) often have had devastating impacts on service accessibility, quality and affordability.

Responding to these experiences, counter-movements emerged in many parts of the world. Over the past 15 years there has been a significant rise in the number of cities and communities that have taken privatized services back into public hands.

Achieving the SDGs will not happen without an enabling environment at international level. But what we often see is a disabling environment that makes it difficult to raise the urgently needed domestic resources.

Local and national (fiscal) policy space is often limited by external interventions. The International Monetary Fund (IMF) plays a central role in this regard. In many countries, for instance Egypt and Brazil, IMF recommendations and loan conditionalities have led to deepening of social and economic inequalities and threats to human rights.

The achievement of these targets is constantly undermined by the inherently asymmetric nature of the global governance system with the IMF and World Bank dominating discourse and policies. Thus, policy coherence will not be possible without overcoming governance incoherence.

The current system of global (economic) governance is marked by systematic asymmetry. The most striking example is the asymmetry between human rights and investor rights.

Removing the ability of investors to sue States in the ISDS system and similar rules in investment and trade agreements would be a first step in reducing the systematic asymmetry in global governance. It would also be a step towards governance coherence for sustainable development.

Overcoming the weakness of the HLPF

Enhancing governance coherence also means that the relevant UN bodies, particularly the High-level Political Forum (HLPF), must be strengthened and no longer de facto be subordinated to the international financial institutions and informal clubs like the G20.

Governments established the HLPF as a universal body and gave it a central role in overseeing a network of follow-up and review processes at the global level.

But compared to other policy arenas, such as the Security Council or the Human Rights Council, the HLPF remained weak.

The SDG Summit in September 2019 and the HLPF review process to take place in 2019-2020 are opportunities to reposition the HLPF more firmly in the General Assembly machinery, similar to the direction taken by the Member States for the Human Rights Council (HRC) in 2005.

With an agenda of equal importance and intimately connected to those of the HRC, the General Assembly should transform the HLPF to a Sustainable Development Council, supported with complementary machinery at regional and thematic levels.

But the claim to make the UN system ‘fit for purpose’ requires more than upgrading the HLPF and its related fora.

Adequate funding at all levels is a fundamental prerequisite to improve the governance of SDG implementation. At the global level this requires the provision of predictable and reliable funding to the UN system.

Governments should reverse the trend towards voluntary, non-core and earmarked contributions as well as the increasing reliance on philanthropic funding. Democratic governance requires democratic funding instead of unpredictable support from private foundations of wealthy individuals.

Parallel to the global level the widening of the public governance space requires, among other things, changes in fiscal policies at national level. This includes, for example, taxing the extraction and consumption of non-renewable resources, and adopting forms of progressive taxation that prioritize the rights and welfare of poor and low-income people (e.g., by emphasizing taxation of wealth and assets).

Fiscal policy space can be further broadened by the elimination of corporate tax incentives and the phasing out of harmful subsidies, particularly in the areas of industrial agriculture and fishing, fossil fuel and nuclear energy.

Instead of engaging in a new arms race, governments should reduce military spending and reallocate the resource savings, inter alia, for civil conflict prevention and peacebuilding.

But as the massive protests by the yellow vests movement in France against rising fuel prices just recently demonstrated, interdependencies between environmental and social policy goals and targets require particular attention. Many environmental policy instruments have regressive effects on income distribution.

But if priorities are properly defined and interdependencies effectively anticipated, fiscal policies can become a powerful instrument to reduce socioeconomic inequalities, eliminate discrimination and promote the transition to sustainable production and consumption patterns.

Enhancing governance coherence requires providing the institutions responsible for the implementation of the 2030 Agenda and the SDGs not only with the necessary financial resources but also with effective political and legal instruments.

At global level this requires changing the current course of relying on non-binding instruments and corporate voluntarism. This is particularly relevant in areas where significant governance and regulatory gaps exist.

The currently discussed post-2020 global biodiversity framework should include binding targets and implementation commitments for State Parties, in accordance with the principle of common but differentiated responsibilities.

With regard to the governance of the oceans, there is currently no mechanism that coordinates the different legal frameworks, making it difficult to effectively address conflicts of interest. This is particularly relevant with regard to deep sea mining. To overcome these governance gaps may require even a new UN body on Oceans.

There is also a need for a legally binding agreement to tackle plastic pollution. Many civil society organizations and legal experts call for a new global Convention on Plastic Pollution with a mandate to manage the lifecycle of plastics, including production and waste prevention.

The Internet Governance Forum (IGF) of the UN has the potential to advance in this arena, but it lacks authority and does not have the mandate to make any rules.

Corporate social responsibility initiatives, such as the UN Global Compact, and voluntary guidelines, such as the UN Guiding Principles on Business and Human Rights (UNGP) have particularly failed to hold corporations systematically and effectively accountable for human rights violations.

The Human Rights Council took a milestone decision in establishing an intergovernmental working group to elaborate a legally binding instrument (or ‘treaty’) to regulate the activities of transnational corporations and other business enterprises.

This ‘treaty process’ offers the historic opportunity for governments to demonstrate that they put human rights over the interests of big business.

Scientists warn that the world is moving fast towards tipping points with regard to climate change and the loss of biodiversity, that is, thresholds that when exceeded can lead to irreversible changes in the state of the global ecosystem.

Similarly, the system of global governance is facing tipping points that, when transgressed, lead to irreversible changes. Multilateralism is in crisis.

But, as medical doctors tell us, a crisis points to a moment during a serious illness when there is the possibility of suddenly getting either worse or better.

There is still the danger of exacerbating authoritarianism and national chauvinism, and of not only shrinking but vanishing space for civil society organizations in many countries.

But there is also a rapidly growing global movement for change, a movement that takes the commitment of the 2030 Agenda to “work in a spirit of global solidarity” seriously.

The year 2020 with its official occasions, particularly the 75th anniversary of the United Nations, provides an important opportunity to translate the calls of the emerging global movements for social and environmental justice into political steps towards a new democratic multilateralism.