Joydeep Gupta is the South Asia Director for the Third Pole. 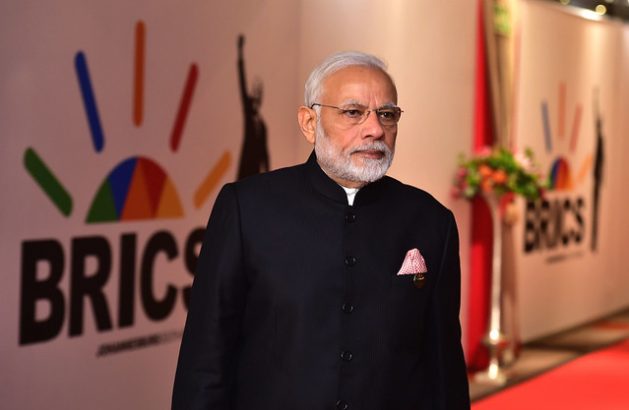 As the second week of the UNCCD Conference of Parties (COP) kicked off in Delhi, Indian Prime Minister Narendra Modi highlighted South-South cooperation and issues of land degradation.

Speaking at the opening ceremony of the high level segment, he said that it was increasingly accepted that climate change impacts were leading to a loss of land, plants and animal species, and that it was causing, “land degradation of various kinds (including) rise of sea levels, wave action, and erratic rainfall and storms”.

All of these issues have a significant impact on India, and other developing countries, and as such, the Prime Minister advocated, “greater South-South cooperation in addressing climate change, biodiversity and land degradation.”

He said India would act both internally and externally on this. Domestically, he said that India was increasing its commitment to restore 21 million hectares of land by 2030 to 26 million hectares, an increase of 5 million hectares. The co-benefit of this would be that it would help create a carbon sink for 2.5-3 billion tonnes of carbon through increased tree cover.

On external action, he said that India was, “happy to help other friendly countries cost-effective satellite and space technologies,” and that it would be creating a Centre for Excellence at the Indian Council for Forestry Research and Education in Dehradun to promote South-South cooperation, where other countries could access technology and training.

These are not questions anyone thought about when they launched the UNCCD 25 years ago. But since degradation of land due to a variety of reasons precedes desertification, these questions are increasingly worrying policymakers, especially from developing countries. At the ongoing New Delhi summit, the issues have come to the fore, and have divided governments along the lines of developed and developing nations, a process familiar to observers of UN climate negotiations.

Despite Narendra Modi’s speech at the high level segment, these issues remained unresolved, with bureaucrats awaiting instructions from the 100-odd ministers gathered at the Indian capital.

The NGOs who work on farming issues are clear that land degradation cannot be halted unless farmers around the world have guaranteed rights over the land on which they grow food for everyone. This may sound like a no-brainer, but estimates show that globally only around 12% of all farmers can claim legal rights over the land they till. To this, experts would like to add the land held in various forms of community ownership, sometimes by indigenous communities. But few countries have strong laws to protect such ownership.

In the first week of the New Delhi summit, developing country governments have wanted this issue of land tenure being discussed at the UNCCD forum, and developed countries – led by the US delegation – have opposed the inclusion. The industrialised countries say it is an issue of different laws in different countries, and discussing it in the UN is not going to help.

But, with land degradation being inextricably tied up with climate change and biodiversity, the urgency of the situation may force UNCCD to discuss land tenure in this and future meetings, and to come up with possible solutions.

The solutions are not always as straightforward as they may seem, warned UNCCD chief scientist Baron Orr in a conversation with thethirdpole.net. Think of what a farmer – especially a smallholder farmer – is likely to do if offered a high price for land. Most of them are likely to sell, as evidenced by the mushrooming malls, offices and homes all around the current summit venue, which was all farmland just about a decade ago. And what happens to our food supply if this replicated globally?

Land tenure is important to halt degradation because people naturally provide better protection to land they own. But it is not enough. A farmer faced with competitors using chemical fertilisers and pesticides is not going to move to organic farming just because that is better for the soil.

Most farmers cannot afford to do that. They need help, as was seen in India when the state of Sikkim pledged to do only organic farming. Sikkim is a relatively small state – replicating that kind of help on a global or even national scale may need far more money than is available for the purpose, as Orr pointed out.

Land tenure is also an area where women face discrimination in a big way. Data journalism site IndiaSpend reported that 73.2% of the country’s rural women workers are farmers, but have only 12.8% of India’s land holdings.

Farmers being forced to migrate because their farms can no longer support them due to land degradation and climate change is the hottest potato of them all. Developed countries are united in opposing this major “push” factor in migration, insisting that people migrate only due to “pull” factors such as better economic opportunities. Developing countries, especially those from the Sahel belt stretching from the western to the eastern coast of Africa, point to numerous instances where farmers are forced off land gone barren, and insist on this issue being discussed by UNCCD.

Former UNCCD chief Monique Barbut has said almost all Africans trying to move to Europe are doing so due to land degradation and drought. Without putting it in words that strong, current UNCCD chief Ibrahim Thiaw has backed the inclusion of migration in the conference agenda.

As host government and conference president, India may have to use all its diplomatic skills if this knot is to be untied during this summit – an especially tricky manoeuvre because India has consistently refused to accept that immigrants from Bangladesh are entering this country because their farms can no longer support them.

And it is not just migration across countries. At a meeting organised on the sidelines of the summit by local government organisation ICLEI, mayor after mayor got up to say farmers are coming into their cities in increasing numbers due to land degradation and climate change, but they have no budget to provide any housing, water, electricity, roads or any form of livelihood to these millions of immigrants.

Still, developed country delegations insist UNCCD is not the right forum to discuss migration. What all 196 governments and the European Union agree upon in the next day or two remains to be seen.

Prakash Javadekar, India’s Minister of Environment, Forests and Climate Change and the conference president, had said at the opening, “If human actions have created the problems of climate change, land degradation and biodiversity loss, it is the strong intent, technology and intellect that will make (the) difference. It is human efforts that will undo the damage and improve the habitats. We meet here now to ensure that this happens.” This foreshadowed what the Prime Minister said today.

He pointed out that 122 countries, among them Brazil, China, India, Nigeria, Russia and South Africa, which are among the largest and most populous nations on earth, “have agreed to make the Sustainable Development Goal of achieving land degradation neutrality a national target.”

Thiaw drew attention to the warnings sounded by recent scientific assessments and the growing public alarm at the frequency of weather-related disasters such as drought, forest fires, flash floods and soil loss. He urged delegates to be mindful of the opportunities for change that are opening up, and take action. The response of governments from developed countries will decide how useful the current summit will be.

The world is in trouble otherwise. The current pace of land transformation is putting a million species at risk of extinction. One in four hectares of this converted land is no longer usable due to unsustainable land management practices. These trends have put the well-being of 3.2 billion people around the world at risk. In tandem with climate change, this may force up to 700 million people to migrate by 2050.