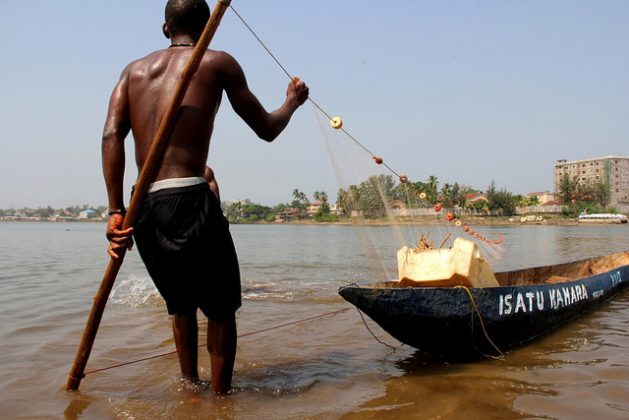 A coastal city, Sierra Leone’s capital, Freetown, is an area where people have relied on the ocean for food and employment for as long as they have lived there. Credit: Travis Lupick/IPS

Oct 15 2019 (IPS) - The latest Intergovernmental Panel on Climate Change (IPCC) Special Report on Oceans and Cryosphere in a Changing Climate highlights the urgency of prioritising ambitious and coordinated actions to address the unprecedented and continuing changes that are taking place in the ocean and cryosphere (Earth’s frozen lands).

The Special Report highlights the importance and associated benefits of limiting global warming to the lowest possible level, by meeting the 1.5oC temperature goal that governments set themselves in the 2015 Paris Agreement.

Reducing greenhouse gas emissions will limit the scale of changes that the ocean and cryosphere will experience. In a 1.5oC future, the consequences for ecosystems and the communities that depend on them will still be challenging, but potentially more manageable – compared to higher levels of warming. Global average surface temperatures have already risen by 1oC since preindustrial times.

The report talks about the benefits of ambitious and effective adaptation for sustainable development and, on the contrary, the risks of delayed action.

Globally, sea level rose approximately 15 cm during the 20th century. Currently, it is rising more than twice that fast (3.6 mm per year), and accelerating. As I think of the work we do at ICLEI Africa, I ask: what does this mean for African coastal cities?

The reality is that the West, Central, East and Mediterranean coastal zones in Africa are very low-lying. Within these low-lying coastal zones are many of Africa’s largest cities: Dakar, Abidjan, Accra, Lagos, Dar es Salaam, Alexandria, Tripoli, and Cape Town.

Unfortunately a number of socio-economic impacts need to be taken into consideration, these include potentially being forced to move settlements, shifting ports and navigational facilities, the loss of infrastructure and disturbance to coastal fishery and tourism operations.

The associated impacts could impose unbearable pressure on Africa’s already hard-pressed economies. The report outlines additional climate-related risks and challenges that people around the world are exposed to today and that future generations will face.

Furthermore, the report calls for the establishment of city coastal management policies and plans that include phased disengagement from the coast, where practicable, and the enforcement of setback lines. City networks like ICLEI have a vital role to play in advocating for cities to reduce greenhouse gas emissions, protect and restore their coastal ecosystems, carefully manage the use of natural resources, limit climate related risks to livelihoods, and to look for opportunities that support adaptation to future changes that also offer societal co-benefits for example through our Coastal City Adaptation training programme.

In addition, ICLEI works with its partners to explore important nature-based solutions for tackling associated challenges (find out more via the UNA Coasts website).

The IPCC’s Special Report on Oceans and Cryosphere highlights the importance of education and provides evidence of the benefits of combining scientific knowledge with local/indigenous knowledge to develop appropriate management actions for climate change risks and enhanced resilience.

We all have a role to play in ensuring both national and local government decision-makers are equipped with the necessary tools that can be used to mainstream, or integrate, adaptation into existing decision-making and appraisal processes, and have access to the science needed to support these decisions.

Mainstreaming the concepts of adaptation and resilience into city decision making processes and, thus, extending beyond the usual urban governance practices is difficult. In order for local government officials to make sound decisions in the face of uncertainty will require new and dynamic decision-making approaches and planning processes.

Climate change adaptation should be more central in development processes

Actions used by national and local governments to address climate change and development need to be complementary and reinforce one another. Furthermore, in order for adaptation strategies to be applicable to current and future challenges, they need to be seen as learning and adaptive processes.

Adaptation cannot be seen as a once off intervention, but rather a continuous process that evolves as new information becomes available and conditions change.

The IPCC Special Report presents a number of options to adapt to changes that are unavoidable, discussed how to manage associated risks and build resilience for a sustainable future. The assessment highlights that adaptation depends on the capacity of individuals and communities and the availability of resources.

Extreme weather events are on the rise, and low-lying coastal cities are highly exposed

Cities and their surrounding areas serve as engines of regional and national economic growth, but they also amplify climate-related risk by virtue of their population density, concentration of critical infrastructure, and other high-value economic assets. More people and more assets are exposed to climate hazards.

The ocean drives our climate and weather and a warmer ocean means an increase in frequency and intensity of extreme events such as cyclones, wind and rainfall, which in turn increases coastal erosion and flooding impacts. The recent cyclones experienced in Mozambique highlight such devastating effects.

Warmer oceans impact negatively on coral reefs, important for tourism and job creation. It is predicted that an increase of 1.5 degrees could cause coral reefs to decline by 70 to 90 percent.

Accessing finance remains a critical challenge for the implementation of policies and plans that enable climate change adaptation.

The required financial flows for the implementation of adaptation plans and their enabling policies can and should be sought from a variety of sources, spanning local, national and international resources, as well as private, public and philanthropic facilities.

Another critical role is therefore to support government authorities to explore innovative ways in which they could secure financial resources for adaptation. An avenue to secure investment to fund coastal adaptation may be to demonstrate and promote the value of the coastal zone and more specifically coastal natural assets in supporting public priorities such as poverty alleviation, economic development and job creation.

The predicted impacts in this report are serious and relate to all aspects of life. Whether you reside near or far from the ocean, consume seafood or not, this report reiterates the need for a healthy ocean to survive. We need to act now to ensure our and our children’s future.