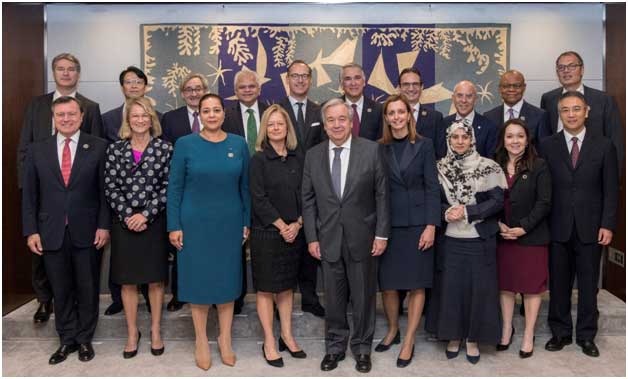 UNITED NATIONS, Oct 29 2019 (IPS) - A Republican US Senator of a bygone era was once quoted as saying “a billion here, a billion there, and pretty soon you’re talking about real money.”

And, not surprisingly, at the UN, when it comes to the implementation of its 17 Sustainable Development Goals (SDGs), the financial targets keep moving – from millions into billions, and eventually from billions into trillions of dollars.

At a ministerial meeting in September, Secretary-General Antonio Guterres thanked member states for their pledges and commitments at three high-level summit meetings: on Climate Action, on SDGs and on Financing for Development (FfD).

“But to make serious progress,” he told the ministers, “we need to fill the financing gap for SDGs—some $1.5 trillion dollars per annum.”

According to the 2014 World Investment Report by the Geneva-based UN Conference on Trade and Development (UNCTAD), the financing gap to achieve the SDGs in developing countries is even higher — and estimated to be around $2.5 – $3.0 trillion per year.

The SDGs include the eradication of extreme poverty and hunger, universal health care, quality education, clean water and sanitation and a green economy, among others– to be achieved worldwide by a 2030 deadline.

At the same time, Guterres has said there is a need to replenish the Green Climate Fund (GCF) to meet the commitment to mobilize $100 billion per year for climate action, including mitigation and adaptation in developing countries, by next year.

But at the GCF Pledging Conference in Paris October 24-25, 27 rich nations pledged only $9.8 billion to the Fund.

And one of the world’s richest nations – the United States—made no pledges, and is unlikely to do so, since it is planning to withdraw from the 2015 Paris Climate Change agreement.

But with deliveries falling short of pledges, off and on, Guterres is looking for concrete commitments.

In his annual report for 2019, the secretary-general was unequivocally clear that “at the current pace, we will not reach our targets” –unless there is much greater urgency and ambition, including enhanced international cooperation, private-public partnerships, adequate financing and innovative solutions.

With a huge shortfall in funding, he has now turned to the world’s business and private sector for investments.

On October 16, Guterres launched the Global Investors for Sustainable Development (GISD) Alliance, described as “a UN’s first-of-its-kind grouping comprising 30 high-powered business leaders from all over the world.”

In an interview with IPS, Navid Hanif, Director, Financing for Sustainable Development Office at the UN’s Department of Economic and Social Affairs (DESA), said these are men and women who have responded to the Secretary-General’s challenge to find ways to rapidly and significantly increase the private sector’s contribution to addressing sustainable development, including achieving the SDGs.

Essentially, he pointed out, the Alliance will help provide leadership in mobilizing resources from the private sector for sustainable development.

Asked why an alliance was needed, he said: “ I can do no better to explain it than the GISD Alliance Members themselves, who issued a Joint Statement at the official launch at the UN. ”

They said that investment in SDGs “is not happening at the required scale or speed. While investment into sustainable development has become increasingly important, there is more work to be done to bring this long-term and inclusive approach into the mainstream.”

They went further, adding: “Businesses need to develop local solutions and projects; investors need to step up their support with financing; and policy makers need to set an enabling framework,” said Hanif.
These are powerful statements by the world’s top investors and banks. By articulating so clearly what this challenge has been, they have also set out to answer the questions of how can this status quo change, and how can it be done as soon as possible?

IPS: With the Secretary-General frequently appealing to the private sector to play a constructive role in helping implement the SDGs, what’s the track record of big corporations and international banks. Have they substantially contributed towards achieving any of the UN’s goals?

NH: Many – for example Citigroup, Standard Chartered Bank, Enel, and ICBC – are involved in major sustainable infrastructure projects, including in developing countries. In fact, most of the CEOs in the Alliance are engaged in other UN initiatives, and they are coming together under the GISD umbrella to go above and beyond.

But the Alliance has also been formed in acknowledgment of the fact that without a scaling up of finance and investment from the private sector, including big banks, pension funds, and other investors, the Global Goals will not be achieved, because what is available from public sources will not be enough.

IPS: Last month a coalition of civil society organizations (CSOs) said the UN provided an exposed stage at the summits for millionaires and numerous representatives of transnational corporations. but the last few decades have shown that the market-based solutions these corporate actors have propagated have not solved the global crises, but rather aggravated them. Is this a realistic assessment?.

NH: The UN of course is very inclusive, precisely because this is how it is constituted. The annual General Debate brings together the highest level of representation from each country – Heads of State, Heads of Government. One of the strengths of the UN is its unparalleled convening power to assemble people at the top of the various sectors in the world, from top economists to billionaires, and putting them in the same room to try to address issues of global concern.

I think I would be more optimistic than to say this has been a failure. Far from it. What we are seeing increasingly is an acknowledgement by the business community that the success of their business is inextricably linked to sustainable development, and to considerations of economic and social good.

For example, there was a recent statement by the Business Round Table that companies should deliver value to all stakeholders – including employees and customers – and not just shareholders. They know it is now critical that companies follow up on this promise and deliver concrete actions.

But we have acknowledged that the pace and scale of change are not commensurate with the level required to achieve the SDGs. That is why we are using all possible avenues to accelerate action. IPS: How are they planning to get this done?

NH: As a first step, the Alliance has agreed on six broad commitments expressed in the Joint Statement. Taken together, these commitments relate to a) finding solutions to scale up long-term finance and investment for sustainable development; b) channeling this to countries and sectors where they are most needed; and c) enhancing the sustainable development impact of these investments.

A concrete action of this newly formed Alliance will be to focus on the investment opportunities in the developing world. As you know, the SDGs apply to every country, but undoubtedly it is the poorest and most vulnerable people and communities which are most in need of the kind of investment the Alliance is attempting to scale up.

Those are the countries in which the 2030 Agenda is most off track, due to conflicts, the climate crisis, gender-based violence, and persistent inequalities. We know what to scale up.

Every day at the UN we hear new stories about sustainable solutions working on the ground. The Alliance is committed to making sure that these solutions go to where they are most needed.

One challenge they will face within their own respective business sectors, is that of short-termism: that is, the tendency, based on current trends, corporate incentive structures, and shareholder expectations, to expect big returns on a quarter by quarter basis, rather than looking down the road to years.

Most of the investments needed for fulfilling SDG targets – such as in infrastructure, including roads, water, sanitation, health and education – require a much more long-term perspective. But they have recognized the need to move from a perspective of just shareholders, to stakeholders.

They said: “We, as GISD Alliance, pledge to scale-up and speed-up our efforts to align business with the SDGs. We recognize that achieving this ambitious plan for the future is not for one stakeholder, but for all stakeholders.”

IPS: How realistic is it to believe that businesses and private entities will contribute to the SDG financing gap? Is the SG expecting significant amounts of altruistic investments? Will the ROI be worth it to the private sector? Over how long?

NH: This is not altruism at all. Good business practice is not at all incompatible with interest in saving the planet, climate action, the environment, and the economic, social, and governance factors that support a well-functioning global economy.

These 30 business leaders recognize that the continued success of their businesses and corporations is inextricably linked to a sustainable future for the world. For example, businesses must have an educated workforce, so investment in schools and public education is necessary.

Workers, clients & customers must be healthy, so investment in clean water and adequate sanitation is both necessary and makes good business sense. This is increasingly being talked about in the business world – for example, by the Business Round Table.

They recognize that we are an interconnected and interdependent world, and their continued success depends on lifting others from poverty, ill-health, lack of education, and in saving the world from the brink of climate disaster.

One thing we can be sure of is that failing to meet the targets of the SDGs will cost everybody on the planet, rich or poor. As usual, unfortunately, the poorest will suffer most, but no one will be exempt in the long run.

Already we see this in coastal communities, for example, which are on the frontline of the climate crisis. Poor people have their homes destroyed by the latest Category 5 hurricane, and so do rich people.

The members of the Alliance recognize this and are committed to putting considerable muscle, and especially their collective convening power, behind ensuring that their colleagues in business around the world will both recognize and act on this reality. They will help to create an environment that rewards long-term investment.

IPS: What do you see as long-term benefits, in addition to the scale up of resources going to the 2030 Agenda?

NH: I think the biggest benefit will be the creation of an enabling environment for long-term investment in sustainable development. These would involve policies and regulations and also the development of long-term benchmarks and metrics and an appropriate financial infrastructure that promotes long-termism.

We would also have readily available data about what instruments work best, and investors would be able to see who and what to trust to ensure their money is targeting sustainable development, with the best chance of return on investment.

IPS: Isn’t that a tall order?

NH: No doubt—but not impossible. These are successful men and women in their own right who are committing themselves to action, not talk, and we and they are confident this venture will succeed.

The same concerns that we in the UN have about people and planet, so well-articulated in the SDGs and the 2030 Agenda, are shared by these global investors, and are now driving them to seize both the challenge and the opportunities involved in helping to create a world that works for all of us, including the most vulnerable. That is very good news.