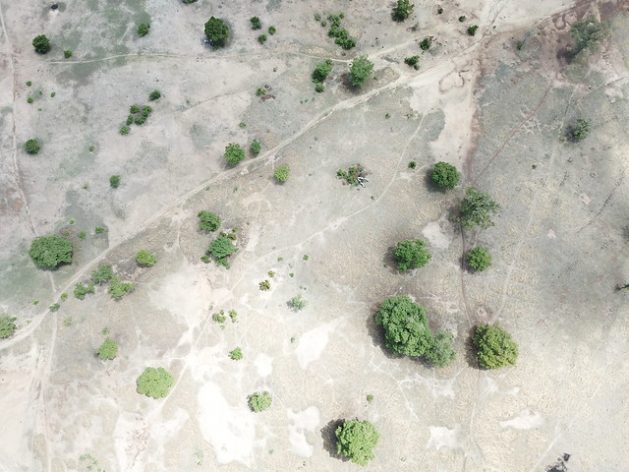 ACCRA, Ghana/JOHANNESBURG, South Africa, Nov 1 2019 (IPS) - The last time Siyabulela Sokomani ran a marathon he did so with a tree strapped to his back. A native wild olive sapling to be exact. It affected his race time for sure, with the seasoned runner completing the 42.2 km race in 4.42 hours rather than his usual 3.37 hours.

But the entrepreneur, who is co-owner of the ethical South African nursery Shoots and Roots, which uses controlled release fertilisers, which are less harmful to the environment, and 70 percent less pesticides, was doing it for a good cause.

The #runningtreecampaign — a fundraising effort by the non-profit Township Farmers which Sokomani started with children’s rights activist Ondela Manjezi — was raising funds to plant some 2,000 indigenous trees in the former apartheid black housing area of Khayelitsha. In addition to planting trees, Township Farmers also educates school kids about gardening their own vegetables and how to plant and take care of trees.

Sokomani grew up in Khayelitsha an area known for the distinctive white, beach sand — in which you can still find seashells — which serves as soil. It’s an environment in which only indigenous plants can flourish.

Under apartheid these areas received little or no services, and had no green spaces. And many still lack this. It was only thanks to a teacher who taught him and his classmates about the importance of the environment, recycling and growing your own food that Sokomani pursued studies and eventually a career in horticulture.

“There was nothing. There was not even a culture of planting trees. The main thing that people strived for was to get a job and to feed their families,” he tells IPS.

So Sokomani and his friends and colleagues hit the pavement, completed the Cape Town marathon and raised the money for the indigenous trees. They have already started planting them in schools in Khayelitsha — starting with Sokomani’s alma mater, Zola Senior Secondary School.

Dotted around the schools are now wild olive, sand olive and silver oak trees, among others. 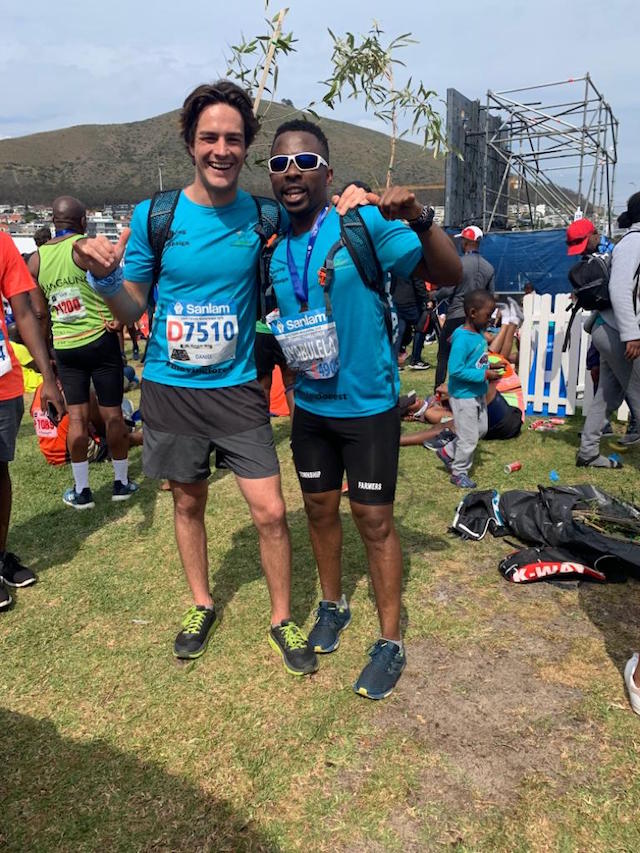 In September, horticulturalist and entrepreneur Siyabulela Sokomani (right) and friends ran the Cape Town marathon with wild olive saplings trapped to their backs to raise funding for 2,000 indigenous trees which planted in the disadvantaged township of Kayaltishea, South Africa. Courtesy: Siyabulela Sokomani

Making a business out of land restoration

The 34-year-old Sokomani, who was elected as a youth ambassador leading restoration initiatives by the 4th African Forest Landscape Restoration (AFR100), has just returned from Ghana’s capital, Accra, where the annual meeting concluded this week.

His attendance at AFR100, a project where African countries have committed to restore over 111 million hectares of degraded land by 2030, was important. As an entrepreneur Sokomani was there to show other African youth how to create viable business opportunities within the land restoration space.

Shoots and Roots has a number large clients in South Africa, regularly providing 150,000 to 200,000 indigenous trees to single clients in one order, and with a capacity to grow one million trees.

“We are missing something. We are missing the youth being actively involved in the management side of things,” Sokomani pointed out.

The AFR100 Secretariat at the African Union’s development agency, the New Partnership for Africa’s Development (NEPAD), coordinates restoration activities on the continent, with support from the initiative’s technical partners, including the Center for International Forestry Research, United Nations Environment and World Resources Institute (WRI), among others.

Land degradation remains a threat to global security, according to the U.N. Convention to Combat Desertification, with two-thirds of Africa comprising desert or drylands. UNCCD figures show that in 2019 some 45 million people across Africa, mostly from East and Southern Africa, are food insecure.

Engaging the energy and innovation of Africa’s youth

But many believe that without engaging the youth in these activities, success may not be possible.

“We have to engage young people meaningfully, invest in them. We need to harness their energy or get out of the way. Are we ready for these young people?” Wanjira Mathai, co-chair of the World Resources Institute’s Global Restoration Council and the current Chair of of the Wangari Maathai Foundation, told the meeting. Mathai’s mother was the late Wangari Maathai — the first African woman to win the Nobel Peace Prize in 2004 and an environmentalist and human rights activist.

Speaking to IPS, Mathai said that youth were an “incredibly important demographic in this restoration movement” as they were Africa’s largest demographic. Some 60 percent of Africa’s population is under the age of 25.

“If you don’t work with youth, who are you working with because they are after all the majority.

“Restoration and many environmental initiatives are very slow and deep because they take time, it takes 30 years for some trees to mature and that is fast in our tropics, it could be even longer — 90 years in Scandinavia. The generation that is actually going to deliver a lot of these ambitions and ambitious commitments that are being made today are the youth,” Mathai told IPS.

She said young people “want to be involved in entrepreneurship ventures many of them are environmentalists but we have not created spaces for them, we only often think they are too young”.

Mathai said that it was not obvious to many nations that the youth should be involved in land restoration and environmental efforts and that new and innovative ways needed to be explored to support youth engagement.

“What we know for sure is that if we leave them out, we leave them out at our own peril because they are energetic, they think differently and they are operating on a completely different level of consciousness that is needed especially for this decade that 2013 is end of a lot of different ambitious targets,” Mathai told IPS.

According to the African Development Bank, 420 million of the continent’s youth aged 15 to 35 are unemployed.

This challenge can be solved if the youth venture into agroforestry, says Honorine Uwase Hirwa, founder Rwanda’s Youth Forest Landscape Restoration initiative, which has trained more than 15,000 young Rwandans to plant trees.

“There’s an opportunity especially on this restoration movement, one can establish a tree nursery, one can plant fruit trees and sell the fruit, there is a lot of opportunity when it comes to restoration it’s a matters of empowering them with knowledge and making it easy for them to access the finance,” she told IPS.

As a South African in the Western Cape province, where only 4,9 percent of agricultural land is owned by the black population, for Sokomani it was particularly hard to succeed in a business that requires land.

But Sokomani has not received bank or grant funding for his business and instead was able to make a success of the business, thanks to the involvement of a business partner and former client, Carl Pretorius.

But he tells IPS, “you won’t get anywhere unless you have a passion for trees…it’s all about the passion and what you do”.

Later, he told IPS why this had to be differentiated: “We had to  make this statement loud and clear because there are some papers now including scientific papers that are being written and disseminated that portray and show AFR100 initiative as only planning trees, fencing them and preventing communities and people to access it which is the exact opposite, that’s is why we say that restoration is beyond only tree planting. It is more about agro forestry and agro ecology systems.”

Horticulture — a business opportunity right in front of you

For Sokomani, the type of trees planted remains important. He said that while we often hear about large, bold initiatives of forests of trees being planted in a single day, he questioned the types of trees planted.

“If we don’t create entrepreneurial opportunities through the establishment of nurseries that are growing [indigenous] trees and, in some areas, [indigenous] grasslands and bulbs and plants that actually thrive in those areas, we are really going to be messing up,” the horticulturist said.

He said he heard of land restoration efforts where the Chinese Popular, a non-indigenous tree, was being used. “You can’t restore degraded land with exotic species.”

He said indigenous trees should also be grown and propagated among local communities and the resultant horticultural enterprises could also prevent migration of local populations to larger cities.

“For the youth out there in Africa, Asia and South Africa, I always say it is very easy to start a horticulture business because your initial inputs are right in front of you. You can get seeds from a tree, from your block or from a forest, you can do division, you can do many other propagation techniques that you actually just start your business,” he said.

Sokomani said that if someone didn’t study horticulture like he did it would require a little bit of effort to learn the techniques, but he insisted that he didn’t believe in the myth of “green fingers” and anyone could learn to propagate and grown plants.

This weekend the horticulturist/marathon runner will slip into on running shoes and participate in one of South Africa’s well-known races – the Soweto marathon. This time though, he will be doing it without a tree strapped to his back.

“Let’s start today, because we really don’t have time when it comes to mitigating climate change.”