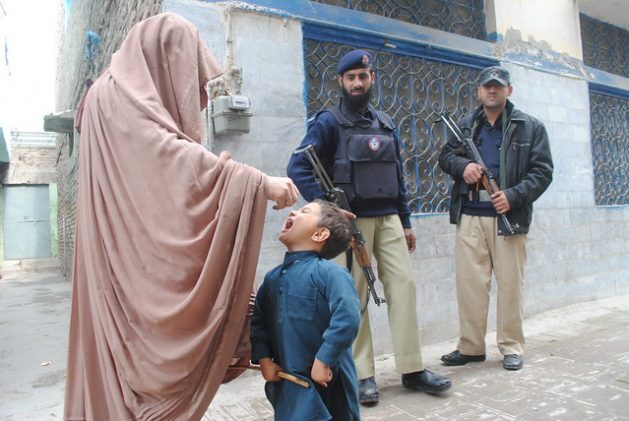 Polio cases around have declined globally by more than 99 percent since 1988, but the type 1 poliovirus remains endemic in Pakistan and Afghanistan, where it has made a comeback this year and infected 102 people. Credit: Ashfaq Yusufzai/IPS

UNITED NATIONS, Nov 20 2019 (IPS) - Efforts to wipe polio off the face of the planet took a step forward this week, with a multibillion-dollar fundraiser in the Middle East helping eradication schemes tackle a virus that disproportionately kills and cripples children in poor countries.

Donor governments and philanthropists pledged $2.6 billion on Tuesday in Abu Dhabi to immunise 450 million children against polio each year — further beating back a bug that is only endemic nowadays in Pakistan and Afghanistan.

Some global health experts say mankind is walking its “final mile” towards a polio-free world, but others warn that so-called polioviruses could re-emerge and spread swiftly, as was witnessed to deadly effect in the Philippines earlier this year.

In Abu Dhabi, Tedros Adhanom Ghebreyesus, director-general of the World Health Organisation (WHO), said “one of the world’s largest health workforces” had been assembled so that medics reach “every last child with vaccines”.

Reem Al Hashimy, Minister of State for International Cooperation for the United Arab Emirates, which hosted the event, said the Gulf nation was working hard injecting Pakistan children so that “together we can consign polio to the pages of history”.

The fundraiser came on the back of last month’s WHO announcement that the second of three types of poliovirus had been successfully eradicated around the world. The other strain was certified as wiped out in 2015.

Polio cases around have declined globally by more than 99 percent since 1988, but the type 1 poliovirus remains endemic in Pakistan and Afghanistan, where it has made a comeback this year and infected 102 people.

Health workers in South Asia say that conflict prevents them from vaccinating children in Afghanistan’s polio hotspots, while in Pakistan, inaccurate video reports about vaccinations causing sickness have deterred parents from sending their children for jabs.

#DYK last month UNICEF and @WHO mounted a national immunization campaign against #polio aiming to protect all children under 15, across Iraq; including over 4,500 #Syrian children in Bardarash camp, outside Dohuk City in Iraq. pic.twitter.com/2xuiE4QR33

Polio invades the nervous system and can cause irreversible paralysis within hours. There is no known cure, but the bug can be prevented by vaccination. Immunisation campaigns have reduced worldwide cases in recent decades.

The disease mostly affects children aged under five years. In every 200 cases, one infection will lead to irreversible paralysis. Among those paralysed, between 5-10 percent of victims perish when their breathing muscles stop working.

Nigeria, the last African country to have cases of wild polio, has not seen any such outbreaks since 2016. WHO aims to certify Africa as polio-free next year, under the Global Polio Eradication Initiative’s “endgame strategy”, which culminates in 2023.

Still, polio-eradication efforts have repeatedly faced setbacks. In unvaccinated populations, or in areas where immunity is low and sanitation is poor, the resilient bug can quickly re-emerge and tear through vulnerable populations.

In September, the Philippines said it was planning an emergency vaccination campaign after polio re-surfaced and caused the first two recorded polio cases for 20 years, affecting different parts of the tropical archipelago.

📣 Incredible news! Thank you to our visionary donors at the #RLMForum who have pledged $2.6 billion to #EndPolio.

Standing together we will protect 450M children each year against polio and make the 🌍 polio-free.#AcceleratingThePacehttps://t.co/GuSLc7R0uh pic.twitter.com/jsRZ504VQO

As such, health officials warned that donations in Abu Dhabi alone were not enough. Michel Zaffran, WHO’s point man on polio, told the Wall Street Journal daily that without immunisation schemes polio would “rapidly spread in the Middle East and Asia and go back to Africa.”