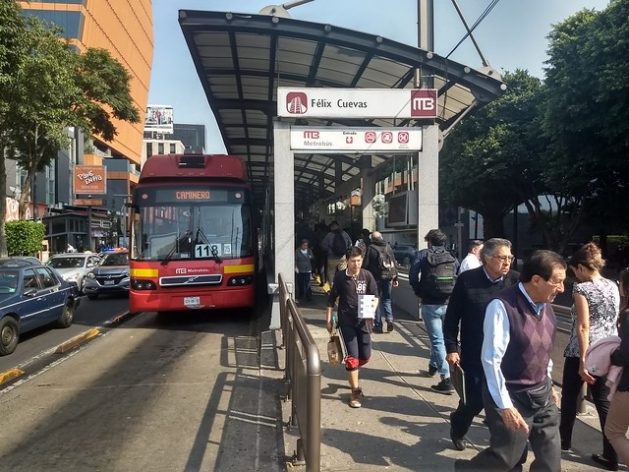 The IDB finances sustainable transportation projects in Latin America and the Caribbean, but these and other works to which the bank provides loans must meet social and environmental standards. The picture shows part of Mexico City's Metrobus public transport system, which runs on a dedicated lane with bi-articulated units. Credit: Emilio Godoy/IPS

MEXICO CITY, Nov 27 2019 (IPS) - The Inter-American Development Bank (IDB) is in the process of modernising the social and environmental safeguards that govern the financing of projects considered vital for the construction of sustainable infrastructure in the Latin American region.

The participation of social organisations and local communities in the analysis of projects, dissemination of information, gender perspective and the focus on climate change are major challenges in this process of reforming the safeguards.

The Washington-based IDB will begin regional consultations with civil society organisations in January to upgrade the standards of those safeguards, approved between 1998 and 2010, after it closed the public consultation for the draft of the new environmental and social sustainability policy for its private sector lending arm IDB Invest on Oct. 15.

Vanessa Torres, deputy director of the Colombian NGO Environment and Society, told IPS that a Latin American coalition of NGOs and local communities asked for adequate time to coordinate their positions and exchange and study information.

"There will be an opportunity to update the risks and comment on the substance. They will have to be adapted to the characteristics of the region. We have not yet seen the draft of the update. Our concern is that substantial aspects, which are already in the current safeguards, not be watered down." -- Carolina Juaneda

“The communities affected by the projects must be informed in order for them to participate. This is a positive process, because the bank has been very open, but we are waiting to see what was included in the draft,” said Torres, an environmental lawyer.

The IDB, whose president is Colombian businessman Luis Moreno, will disseminate the draft at the end of November and stage consultations in 2020 in Argentina, Panama, Jamaica and Peru.

In September 2020, the bank’s Board of Executive Directors, made up of 14 representatives from several blocks of countries, will receive the final version and the implementation plan.

Among other measures, at the end of the process, in terms of environmental and social policy in project finance, the IDB will adopt the eight principles of the International Finance Corporation (IFC), the private lending arm of the World Bank, on issues such as environmental impacts, labour issues, biodiversity conservation and indigenous peoples, and will apparently incorporate a gender approach and stakeholder participation and information dissemination.

The multilateral institution proposes an integrated policy framework, with a socio-environmental statement and 10 technical standards for the management of environmental and social risks.

“There will be an opportunity to update the risks and comment on the substance. They will have to be adapted to the characteristics of the region. We have not yet seen the draft of the update. Our concern is that substantial aspects, which are already in the current safeguards, not be watered down,” said Carolina Juaneda, a consultant for the Latin America Program of the non-governmental Washington-based Bank Information Center.

In 2018, the IDB approved 96 sovereign guaranteed (backed by a government) loan projects with total financing of 13.4 billion dollars, and disbursed more than 9.9 billion dollars.

The bank ranks the level of risk in terms of a project’s environmental and social sustainability. In 2018, eight percent of the loans were granted to high risk projects, 24 percent substantial risk, 31 percent low risk and 37 percent moderate, according to the 2018 Sustainability Report. 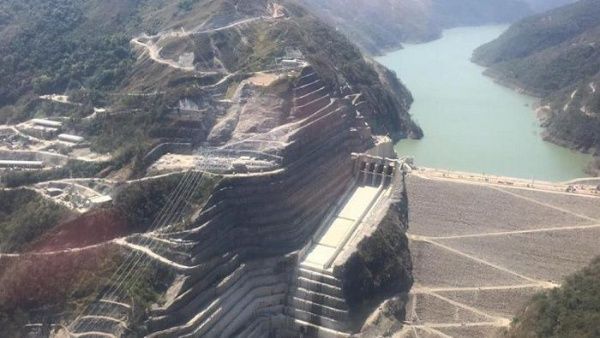 The IDB will investigate whether IDB Invest, its private finance arm, failed to comply with the safeguards in the loan for the Ituango hydroelectric plant, which is being built on the Cauca River, 170 km from the city of Medellín, Colombia, after a serious accident with the dam in 2018. Credit: Courtesy of Colombia’s Attorney General’s Office

Ten percent of the projects failed to meet the standards, 20 percent adhered to the guidelines, 21 percent required immediate corrective action, and 49 percent had partially consistent compliance with the requirements.

The IDB has 2,596 active projects worth 60.8 billion dollars, most of which are being implemented by Argentina, Brazil, Colombia, Mexico and Paraguay in areas like transportation, energy, water and sanitation. In addition, it is evaluating 225 projects for another 19.8 billion dollars.

The ravages of the climate emergency in Latin America and the Caribbean, such as more intense hurricanes, rising temperatures, loss of biodiversity and rising sea levels, make the construction of sustainable infrastructure an imperative.

Safeguards as a tool

Beginning in the 1990s, multilateral financial institutions began to design safeguards that their clients - governments and companies - and the projects they finance must respect, thanks in part to pressure from affected social organisations and communities demanding that the impacts of these ventures be taken into account.

They also put in place mechanisms to process complaints of non-compliance with the standards or requirements set by the safeguards in projects financed by the multilateral banks.

Since last decade, financial institutions have revised these guidelines to adapt them to a changing social and environmental context, such as the worsening of climate change and its effects, including intense storms, droughts and rising temperatures. Currently, the greatest pressure on the banks is for them not to finance hydrocarbon projects, due to the climatic urgency to stop using fossil fuels.

In updating the safeguards, the IDB has developed more than 60 new environmental, social, economic and institutional criteria to be applied in the design, construction, operation and final conclusion of a project financed by the institution.

The update stems from recommendations made in 2018 by the IDB Office of Evaluation and Oversight, which found that a large percentage of IDB projects that were reviewed did not fully comply with the initial safeguards requirements prior to loan authorisation and that the requirements were not addressed during execution.

The organisations involved in the update process mention, as an example of unsustainable infrastructure, the Ituango hydroelectric dam, built by Empresas Públicas de Medellín on the Cauca River, Colombia’s largest river. The IDB provided 550 million dollars for the project and administered part of the one billion dollars provided by other banks.

In May 2018, torrential rains overflowed the river, causing the collapse of the tunnel built to divert that flow, and as a result landslides, floods and the displacement of thousands of people from their homes, raising serious questions about the sustainability of the country’s largest hydroelectric project and one of the biggest in Latin America.

In June of that year, 477 residents of eight municipalities in the northwestern department of Antioquia requested that the Independent Consultation and Investigation Mechanism (Mici), the bank’s autonomous body responsible for evaluating performance against its standards, investigate whether the IDB and IDB Invest respected their own socioenvironmental safeguards.

The IDB Board of Directors resolved on Oct. 29 that it would inquire whether IDB Invest had complied.

Between 2010 and September 2019, Mici received 151 complaints, of which 144 referred to the IDB, four to IBD Invest and four to IDB Lab, a platform that seeks to mobilise capital, knowledge and connections to promote innovation in the region. Thirteen are active, of which seven are in the consultation phase, five in the compliance review phase and one is being assessed for eligibility.

The organisations say the bank’s sustainability framework should include a comprehensive approach embodied in the operational strategy and safeguards, with an exclusion list of hydrocarbon projects.

The IDB has an active regional initiative to promote the reduction of polluting emissions and improvements in efficiency through the use of gas, backing for Guyana’s oil sector and other support for the “sustainable and responsible development” of mining and hydrocarbons in Colombia.

Moreno, who assumed the presidency of the IDB in 2005, will conclude his term in mid-2020 and wants to do so having put in place updated social and environmental standards.