With the UN Security Council in Paralysis, Are there New Hopes for Rohingya Muslims?

UNITED NATIONS, Nov 19 2019 (IPS) - The 15-member UN Security Council (UNSC) stands virtually paralyzed in the face of genocide charges against the government of Myanmar where over 730,000 to one million Rohingya Muslims have been forced to flee to neighboring Bangladesh since a 2016 crackdown by Myanmar’s military.

A team of U.N. investigators has declared that the crackdown was carried out with “genocidal intent”.

The paralysis at the UNSC, attributed to inaction by two of its veto-wielding members, namely China and Russia, has now triggered interventions by both the International Criminal Court (ICC) and the International Court of Justice (ICJ) which are expected to sit in judgment over the atrocities.

Although judges at the ICC last week agreed to authorise a full-scale investigation into allegations of mass persecution and crimes against humanity, Myanmar is not a party to the Rome statute that established the ICC.

Asked how effective any ruling would be against Myanmar as a non-party, Param-Preet Singh, Associate Director, International Justice Program at Human Rights Watch, told IPS: “Any action by the ICC would be against individual defendants, not the state”.

“If your question is whether Myanmar would surrender any suspects to face justice in The Hague, based on its current position with respect to the ICC, it would be easy to say that the authorities would never cooperate.”

But the same was said about Radovan Karadzic, Ratko Mladic and Slobodan Milosevic – each of whom fell from positions of power and eventually found themselves in the dock at the Yugoslav tribunal, she pointed out.

“Of course, it was a long and complex process to get those defendants before the court, and that’s exactly why it’s difficult to speculate about the success of any ICC efforts to hold individuals to account”, she declared.

Dr Tawanda Hondora, Executive Director of World Federalist Movement – Institute for Global Policy (WFM-IGP), the organisation that houses and coordinates the work of the Coalition for the International Criminal Court (CICC), told IPS

“While Myanmar disputes that genocide has taken place, it has done very little to prevent and stop the persecution, deportation, forced displacement, killing and torture of the Rohingya community, which acts may amount to genocide.” 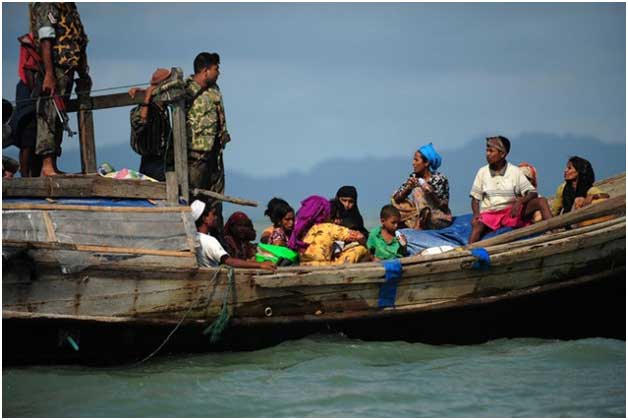 “We hope that the ICJ will reaffirm the legal principle that any States Parties to the Genocide Convention have legal standing to sue another States Party, which has failed to take steps to prevent and punish acts of genocide.”

“A declaration by the ICJ that Myanmar has failed to prevent and punish those responsible for these heinous acts will help to address the plight of the Rohingya community.”

This case, he pointed out, is a wake-up call for the United Nations Security Council, which continues to shirk its responsibility to maintain international peace and security and has so far failed to protect the Rohingya community.

The formal submission to the ICJ, accusing Myanmar of genocide through the murder, rape and destruction, was made on November 11 by the Republic of the Gambia, on behalf of the 57-member Organization for Islamic Cooperation (OIC).

Meanwhile, in a statement released November 14, ICC Prosecutor, Fatou Bensouda, said: “I welcome the decision by ICC judges to “authorise my request to open an investigation into the situation in the People’s Republic of Bangladesh/Republic of the Union of Myanmar.”

She said the ICC judges have “accepted my analysis that there is a reasonable basis to believe that coercive acts that could qualify as the crimes against humanity of deportation and persecution on grounds of ethnicity and/or religion may have been committed against the Rohingya population”.

With that decision, a formal investigation has been authorised, for crimes within the jurisdiction of the Court, allegedly committed on or after 1 June 2010, at least in part on the territory of Bangladesh, or on the territory of other state parties, as described in the decision.

This is a significant development, sending a positive signal to the victims of atrocity crimes in Myanmar and elsewhere, she declared.

After a reported military-led crackdown, widespread killings, rape and village burnings, nearly three-quarters of a million Rohingya fled Myanmar’s Rakhine state to settle in crowded refugee camps in neighboring Bangladesh, according to an ICC press release.

Asked what the next step would be if Myanmar refuses to abide by the decisions of the two international courts of justice, HRW’s Singh said: “I think it’s important to discuss both cases as proceedings, since final decisions in both courts are a long way off”.

She said the fact that Myanmar’s actions are being scrutinized by two judicial mechanisms – through the separate but complementary lenses of state and individual responsibility – challenges Myanmar’s empty denials of its role in atrocities and raises the political cost of ongoing abuses, both for Myanmar and the countries that would rather ignore its dismal human rights record.

Asked if the intervention by the two courts also send an implicit message to the UN Security Council which has so far refused to impose sanctions or take punitive action against Myanmar, Singh said: “The actions by Gambia and the ICC prosecutor to find a measure of justice for the Rohingya contrast sharply with and further expose the UN Security Council’s paralysis on the crisis in Myanmar”.

“And with that exposure, there is a rising political cost for its refusal to discharge its responsibility to address concerns about international peace and security in the region,” she noted.

Asked for a reaction from Secretary-General Antonio Guterres, UN spokesperson Stephane Dujarric told reporters November 14: ‘No, it is not for us to comment on procedures going on in the judicial end of the UN system. I think the Secretary General has spoken out very clearly and very forcefully on the need to address the situation of the Rohingyas and for the Government of Myanmar to put in place a number of actions and for justice to be done, but we have no specific comment on that case.’

Meanwhile, back in October 2018, Marzuki Darusman, chair of the fact-finding mission of the Human Rights Council (HRC), briefed the Security Council on the mission’s report.

Among its findings was that Myanmar security forces had committed what amounted to war crimes and crimes against humanity in their treatment of several ethnic and religious minorities in Rakhine, Kachin and Shan States.

He also said there was sufficient information regarding the treatment of the Rohingya ethnic group in Rakhine State for senior officials in the Tatmadaw (Myanmar’s military) to be investigated to determine their liability for genocide, according to the Security Council Report, a NGO publication monitoring the activities of the UNSC.

Dr. Simon Adams, Executive Director of the Global Centre for the Responsibility to Protect, told IPS that it is worth keeping in mind that Bangladesh is a member of ICC. Any indictment from the ICC would mean that some of Myanmar’s senior generals, who are responsible for atrocities, would not be able to travel outside Myanmar without the fear of being arrested and possibly ending up in a prison cell in The Hague.

He also pointed out that the ICC is about individual criminal responsibility and the ICJ is about state responsibility. But ICC indictments and a condemning judgement from the ICJ would puncture the Myanmar authorities’ culture of denial, exposing them in front of the entire world as a government responsible for genocide, the crime of crimes.

“Both of these international courts, which are sometimes criticized as being distant, bureaucratic and slow-moving, have done more to address the issue of the genocide against the Rohingya than the UN Security Council. More than two years have passed since the genocide began in northern Rakhine State. The UN Security Council needs to name the crime and hold the perpetrators accountable. Anything less is a total abdication of their historic responsibility,” Dr Adams declared.