Why Is Growth Slowing in China?

BERLIN and KUALA LUMPUR, Dec 10 2019 (IPS) - China’s gross domestic product (GDP) grew by 14%. Since then, its growth rate has declined by more than half to 6.6% in 2018. The five-year moving average growth rate is at its lowest since reforms began in 1978, although annual growth briefly fell lower during 1989, the year of the Tian An Men incident.

China’s growth slowdown
Economists have suggested various factors slowing China’s growth, including its lower population growth and ageing population. These demographic factors are real, but their significance has been exaggerated.

The working age population and employment both grew at 2% annually at the end of the 20th century, but such growth started to decline early this century before ceasing in 2014. These factors can only explain up to two percentage points of its annual GDP growth rate decline.

Also, the advantages of economic backwardness have been exhausted: it is easier to catch up from a low base, while growth tends to slow in fast-growing economies approaching the technological frontier, especially as cutting-edge innovation is more difficult and costly than copying existing technologies, whether for free, or even by buying patents and copyrights.

Is rapid growth sustainable?
Developed economies rarely grew for extended periods at the pace of the East Asian ‘miracle’ economies ‘catching up’. After all, only five economies have successfully gone from ‘developing’ (i.e., less than a fifth of US per capita income) to ‘developed’ (over half the US level) status.

These were Japan and the first-generation newly industrialized economies (NIEs) during the 1950s-1980s, namely South Korea, Taiwan, Hong Kong (HK) and Singapore, although HK’s limited industrialization is moot and clearly past.

Marked growth slowdowns have only occurred in Japan and HK, after their per capita incomes were over half the US level, whereas the other ‘tigers’ have continued to grow, eluding the supposed ‘middle-income trap’.

As China’s per capita GDP (at purchasing power parity, i.e., even in comparable prices) is still under a quarter of the US level, a similar growth slowdown in China may still be a couple of decades away.

Exchange rate competitiveness
China’s growth slowdown also appears to be due to political choices. Many argue that its growth for four decades has been due to deliberate exchange rate depreciation, promoting exports and discouraging imports, thus rapidly accumulating foreign exchange (forex) reserves.

But as China’s rapid export-oriented growth with low wages was also due to rapid forex accumulation, keeping its exchange rate low, and raising exports, savings and investment. From around 2005, however, China gave in to US-led international pressures to let the RMB appreciate.

The real exchange rate of China’s RMB – the ratio of Chinese to international prices, as measured by the ratio of its dollar GDP at the official exchange rate to its purchasing power parity GDP – rose during 2003-2013, especially in 2006-2011, except for a brief re-peg right after the 2008 financial crisis started.

The People’s Bank of China (PBoC) tried in August 2015 to move towards a floating exchange rate regime, precipitating a 3% fall in three days against the US dollar. China’s central bank quickly abandoned the attempt, spending over a trillion dollars of forex reserves over the next two years alone to prop up the RMB.

Ironically, the August 2019 PBoC decision to let its currency sink below the RMB7/USD ‘psychological threshold’, consistent with greater exchange rate flexibility, has been portrayed by the Trump administration as currency manipulation although it does not meet US Treasury criteria. 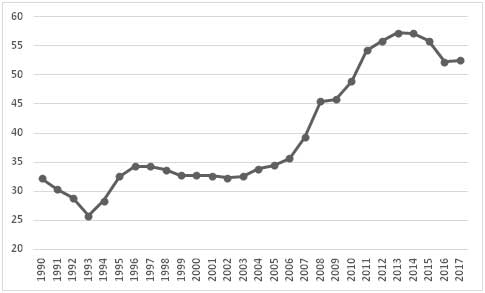 Improving wellbeing, not growth
The US – long dominant in the International Monetary Fund (IMF), the World Bank, the G7 and the G20 – accused China of ‘currency manipulation’ to gain ‘unfair’ advantage in international trade, causing ‘global imbalances’, including the huge US current account deficit with China.

China’s exports as a share of GDP peaked at 35% in 2005, before beginning to fall. The 2008-2009 Great Recession saw RMB appreciation suspended briefly as China opted for a large domestic stimulus package, which accelerated the transition to greater domestic consumption and lower savings as wages rose with high employment and labour force utilization rates.

As the world experienced strong contractionary tendencies, China’s growth slowed from 14% in 2007 to a still high 9% in 2009. As domestic consumption rose, savings, investments and growth inevitably declined. The investment share of GDP peaked at 45% in 2013, before declining.

This article draws upon: Slowdown of growth in China: Circumstances or choice? published by the Dialogue of Civilizations Research Institute, Berlin.