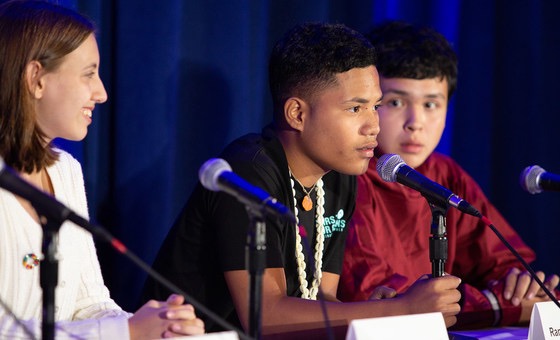 ILLINOIS, United States, Feb 14 2020 (IPS) - Recently, the Associated Press cropped out Ugandan climate change activist Vanessa Nakate from a photo at the World Economic Forum. The remaining activists in the photo, including Greta Thunberg, were all white.

While the AP cited picture composition as the reason for the edit and later apologized for their actions, it still happened. The editing out of Nakate – who said it felt like her story had been erased — calls for a deeper reflection on the issue of diversity, inclusion, and the lack of representation of people of color and other marginalized groups in key global conversations.

In fact, people of color should be the ones we hear from the most when it comes to issues like climate change. According to climate research and many reports, including the recently released IPCC report, the outcomes of climate change disproportionally affects people living in developing countries.

Highlighting activists of color is good for everyone. Convincingly, a growing body of evidence shows that when minorities and underrepresented voices are included, and their voices and actions displayed, including in science, everyone benefits

For example, in March of 2019, flooding events in Malawi and Mozambique brought about by climate change affected and disrupted the lives of nearly 843,000 people. In addition, in the same year, drought, floods, and conflicts brought about by the changing climate, contributed to soaring levels of hunger in the horn of Africa.

According to Save the Children, nearly 13 million people were affected by hunger with children making half the number.

Instead, climate activists and voices from these communities must be centered in global conversations if we are to sustainably mitigate climate change. They bring in firsthand experience which can greatly inform climate change conversations, science, action, and policy.

As an African climate change activist who has greatly benefited from media visibility, I strongly feel we must highlight activists of color in the media – it matters who is featured there. Undoubtedly, Thunberg is a passionate, fearless and determined activist and she deserves to be celebrated.

Failing to showcase and highlight the contributions, ideas, and actions of these activists from developing countries hurts us all. It actively crops these voices out and reduces the chances that their worthy ideas will help shape policies and the world.

Often those ideas are ingenious, born of necessity and creativity. This is something I saw firsthand while growing up in rural Kenya in a town with no electricity or Internet. People in these regions innovate every day, but their ideas and ways of addressing challenges are rarely featured – and not on a global scale. This should change.

Further, rendering these activists invisible potentially denies them the chance of catching the eye of and benefiting from funding agencies that can finance their ideas and amplify their contributions. It perpetuates the problem by allowing groups with more visibility and funding in the first place to continue to grow through support.

Highlighting activists of color is good for everyone. Convincingly, a growing body of evidence shows that when minorities and underrepresented voices are included, and their voices and actions displayed, including in science, everyone benefits.

It makes our world stronger. It also sends a message to other activists and aspiring young people that they, too, can be the voice on issues of our day.

The Late Nobel Prize winner, Wangaari Maathai, for example, was an environment activist whose work continues to inspire many people-young and old. Imagine how much more persons of color may be able to achieve if they have more recognition and support.

In the end, we all must make an effort to ensure that diversity and inclusion happens. Small actions like calling out these injustices as they happen would go a long way.  If you see something—say something.

We cannot stand by the perimeter and expect a just and equal world to happen. Evermore, we must continue to be creative and find other avenues to highlight activists of color and those from marginalized groups. We all have a stake in mitigating climate change.

Dr. Esther Ngumbi is an Assistant Professor at the Entomology Department, University of Illinois at Urbana Champaign. She is a Senior Food security fellow with the Aspen Institute and has written opinion pieces for various outlets including NPR, CNN, Los Angeles Times, Aljazeera and New York Times.