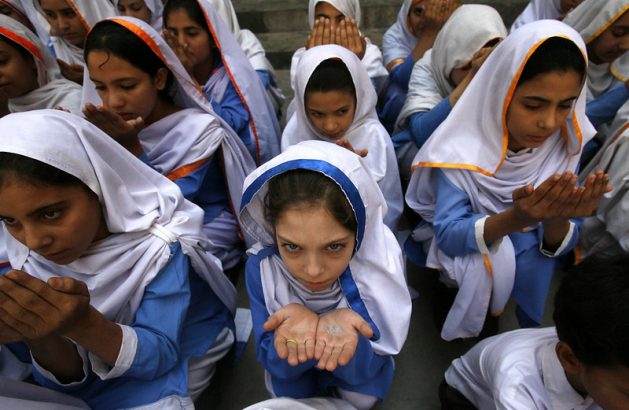 Schoolgirls in Peshawar. Section 89 Pakistan Penal Code (PPC), which allowed for the use of corporal punishment by parents, guardians and teachers "in good faith for the benefit”, was suspended last week by the Islamabad High Court. Credit: Ashfaq Yusufzai/IPS.

ISLAMABAD , Feb 19 2020 (IPS) - “He struck his head, his side, his stomach and went on hitting him. When Hunain said he could not breathe, the teacher slammed him against the wall, saying, ‘Being dramatic are we?’” This is the eye witness account from a classmate of 17-year-old Pakistani student, Hunain Bilal, who was allegedly beaten to death by his teacher after he failed to memorise his lessons.

It was a story that had sent shockwaves through Lahore after Bilal died from his injuries in September. But Section 89 of the Pakistan Penal Code (PPC) allowed for the use of corporal punishment by parents, guardians and teachers “in good faith for the benefit” meant that the teacher accused of Bilal’s death could not be tried for murder.

Bilal’s cousin, 21-year old media studies student Rimsha Naeem, has been concerned that the small social media uproar that placed a spotlight on the issue of corporal punishment in Pakistan was only fleeting. And that instead the memory her cousin’s tragic death would slowly fade as and the government appeared to be soft-peddling the issue.

“The murderer did not have to bear any consequences and is out on bail,” she told IPS, explaining why it was imperative that a law be put in place to stop “such barbarity so no parent should ever have to bear this tragedy”.

Last week, however, saw a victory for the rights of school kids across the country when singer and rights activist Shehzad Roy filed a successful petition with the Islamabad High Court to ban the practice of corporal punishment of children up to the age of 12.

“It was a huge win for us!” said a jubilant Roy, speaking to IPS after the court suspended Section 89 of the PPC. He is happy as now the children of the Islamabad Capital Territory, the only area in Pakistan where they remained unprotected by law or any administrative order, will hopefully be spared the rod.

Roy said corporal punishment only caused harm and often led to a child dropping out of school or running away from home. Dr. Murad Khan, Professor Emeritus at Karachi’s Aga Khan University’s Department of Psychiatry, endorsed this. “The more damaging effect is that it leads to poor performance, loss of confidence and self-esteem, a sense of helplessness, anger (that can turn into violence towards others and self), anxiety and depression. In addition there is humiliation, shame and loss of dignity. All this affects a person mental health and well being,” he added.

Referring to a Harvard study, Roy told IPS that corporal punishment affected the same part of the brain area that is affected by severe physical and sexual abuse.

“The effect of corporal punishment on different individuals is different. Some grow up to be abusers themselves; some grow up angry at parents and family for not protecting them. Others grow up with poor self confidence and self esteem. Many hate all authority figures and have difficulty in forming trusting relationships.”

Khan also pointed out that in terms of behaviour change there is enough research to show that corporal punishment never works “neither as a deterrent nor in terms of changing a student’s behaviour”. He told IPS students should certainly be disciplined for any transgression – academic, social, behaviour etc. but never physically.

But Roy’s work is far from over. In the absence of a bill, the other three provinces, namely Punjab, Khyber Pakhtunkhwa and Balochistan, have standing administrative orders barring corporal punishment to be inflicted. To this, Sami Mustafa, an educationist who has been running a school system in Karachi for over four decades, said tersely, “When was the last time these court orders worked in improving the educational culture of schools?”

“These administrative orders do not mean much,” agreed Roy because these “do not criminalise the act” and so like in the case of Bilal, the teacher cannot be tried for murder. What’s more, “it is an interim order and so far is limited to schools” pointed out human rights lawyer, Sara Malkani. Nevertheless she found “filing this petition is an important step” and one which was “in the right direction”. “The goal now is to get a final order that permanently bans corporal punishment,” she told IPS.

Roy, too, is aiming for a more permanent solution. “I want to re-ignite a conversation whereby the legislators in these provinces can find it upon themselves to legislate.”

And with a “good law” to take cue from, according to Shahab Usto, who is representing Roy, the work for other provinces in law-making should not be too difficult.

“Sindh’s law is quite comprehensive and can be replicated in other provinces,” he told IPS. “It encompasses all the possible situations where a child faces punishment be it school, work, rehabilitation centre, jail or other places. There is no need to reinvent the wheel, it will only take more time,” he said.

He further said the Sindh Child Protection Authority Act 2011 could be brought in aid to reinforce the implementation of the Prohibition of Corporal Punishment Act, as the former contains provisions for institutional arrangement.

“Both laws, if implemented in a mutually supplementary way, could make a substantive improvement towards protecting the child human rights in Sindh, for now,” he told IPS.

With Pakistan having ratified and becoming a signatory to the United Nations Convention on the Rights of the Child back in 1990, which mandates member states to legislate the laws protecting children, Usto pointed out that Pakistan was “already behind schedule by 30 years”.

Roy and Usto may be happy with the IHC’s verdict for now, but child rights activist and senior lawyer, Anees Jillani, has his misgivings about “judicial interventions” in matters that should “ideally be handled by the parliament and provincial assemblies coming up with a comprehensive law handling this issue”. He told IPS this new trend by the judiciary overstepping its domain to “attract media attention” rather “unhealthy”.

“I don’t want his life to have gone in vain,” Naeem, Bilal’s cousin, told IPS. “This unfortunate event may well have gone unnoticed by society had my cousin not died from his injuries which created an uproar on the social media, after which the mainstream media took it up…This happens to scores of kids every day, and is seen by our society as an acceptable way of disciplining a child.”