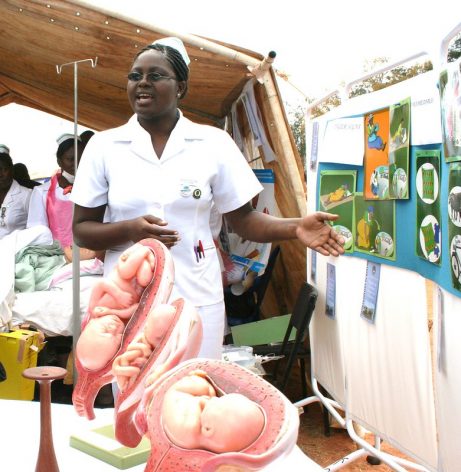 A Malawian nurse at a training session. A report looking into the discontinuation of U.S. global health assistance to foreign non-governmental facilities providing abortion or abortion-related services, says that the ban is affecting the population in Malawi. Credit:Claire Ngozo/IPS

The report, titled ‘A Powerful Force: U.S. Global Health Assistance and Sexual and Reproductive Health and Rights in Malawi’ was released on Feb. 10 by Washington, D.C.-based sexual and reproductive health rights organisation CHANGE, the Center for Health and Gender Equity.

Serra Sippel, president of CHANGE, told IPS they chose to study Malawi in part because the country is a recipient of U.S. assistance in the three key fields of sexual and reproductive health: family planning, maternal and child health, and HIV and AIDS.

“The GGR impacts health structures and when health structures are impacted, it is often the marginalised and criminalised groups who bear the brunt of the impact,” Sippel told IPS. “This includes people living in rural areas, adolescent girls and young women, and female sex workers.”

The report details the numerous ways in which GGR affects the fabric of a country where many communities are already averse to abortion, often owing to religious concerns. This means that when a young woman needs to get an abortion, they might do so in unsafe ways in order to keep them secret.

One partner organisation is quoted in the report as saying, sometimes a girl “would drink a potion like a solution of washing powder and some will use sticks” to engineer her own abortion.

In the Sub-Saharan country, where abortion is a taboo and can even lead to 14 years in prison in cases where there is no “life endangerment” of the pregnant person, more than 50,000 women suffer annually from unsafe abortion practices, according to the report.

Marie Stopes International (MSI), which doesn’t have direct services in Malawi, estimates that about 78,000 women undergo unsafe abortion practices in the country, according to the report. Abebe Shibru, MSI’s country director in Zimbabwe, shared with IPS the general effect it’s having in sub-Saharan Africa.

“The GGR continues to aggravate the situation of undermining women’s right for choice,” Shibru told IPS. “Lack of adequate services for family planning, increasing rate of teen age pregnancy and increasing maternal mortality, mostly from unsafe abortions, are some of the issues that the GGR contributes to.”

Sippel told IPS that the local MSI affiliate Banja La Mtsogolo (BLM) was “forced to end their participation in the U.S. PEPFAR DREAMS Partnership, a highly effective HIV prevention programme, because of the GGR”.

Some of the impact is top-down from the government. In 2015, the Termination of Pregnancy Bill, introduced in Malawi to ensure safe abortion in cases of incest, rape, fetal anomaly, was “slowed down” by the Minister of Health given their fears that it would affect U.S. foreign aid in the country while President Trump is in office, according to the report.

“We also met with the International Planned Parenthood Federation affiliate Family Planning Association of Malawi (FPAM) who was forced to stop their participation in the LINKAGES project which provides HIV and AIDS prevention, care, and treatment services for key populations. Because of the GGR they were forced to close four clinics,” Sippel added.

There is also a further effect on a community that’s hard hit by climate change, and vulnerable to a range of climate concerns such as intense rainfall and droughts, among many other issues. These issues, although not directly related to GGR, further amplify the negative effects such foreign policy has on those at the center of the crisis, according to advocates.

“When women are displaced because of climate change, their risk of exposure to gender-based violence often increases,” Sippel told IPS. “They are walking longer distances to get water and firewood. Also, as women enter camps post-disaster, their access to SRHR services can often be limited.”