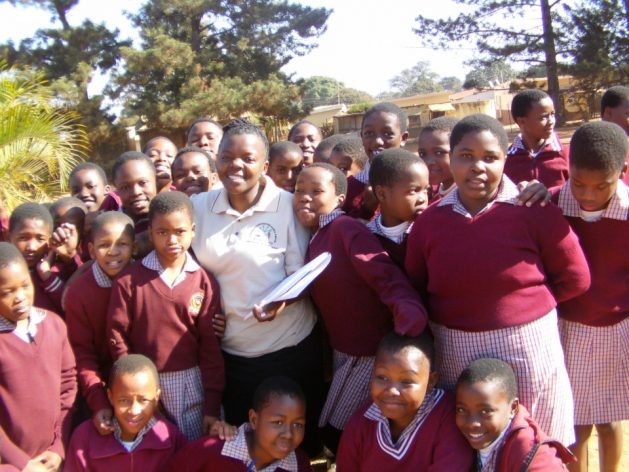 MBABANE , Jan 21 2020 (IPS) - When 14-year-old Nomcebo Mkhaliphi first noticed the blood discharged from her vagina, she was shocked. Confused, she turned to her older sisters for advice.

“My sisters told me that they were experiencing the same every month and that they used fabric, toilet paper and newspapers as sanitary wear,” recalls the now 45-year-old Mkhaliphi. She had to follow suit and use these materials because she had no money to buy sanitary pads.

Mkhaliphi and her four siblings were single-handedly raised by their father in a poor household in rural Makhonza, south of Eswatini. Mkhaliphi’s parents had separated when she was nine, so conversations about menstruation were never had, both at home and school.

Recounting her experience with periods invokes sad emotions for Mkhaliphi. She had three significant moments at school where her periods put her at the centre of gossip, bullying and humiliation.

At some point, she stained her tunic, followed by other incidents where a toilet paper and a newspaper she wore in the place of a sanitary pad fell to the ground after getting soaked, right in front of other learners.

“These incidents lowered my self-esteem because other students used my experience to bully me,” says the mother of two boys and a girl.

Instead of dropping out of school like other girls in a similar situation, Mkhaliphi persevered until she completed her high school education. Today, she volunteers her time to teach young girls and boys at schools and communities about menstruation, particularly the stigma associated with periods. She includes boys so that they stop seeing periods as a laughing matter but a natural occurrence for their female peers.

“There’s a lot of stigma associated with menstruation. When a woman is on her periods, she is said to be in ‘cleansing’ something that portrays her as dirty. That’s why in other families a menstruating woman is not allowed to cook, while in some churches they’re not allowed to come closer to the pastor,” Mkhaliphi tells IPS, adding that some churches order women to sit at the back and not participate in the service.

What’s worse, it’s taboo to talk about menstruation because in the Swati culture it has always been portrayed as a secret. This small landlocked southern African nation is the continent’s last monarchy, with a population of just under 1.4 million.

Through her talks, Mkhaliphi is using her story to end the stigma associated with periods and building confidence among girls by giving them the right information about their sexual reproductive health. She also gives talks to primary school children because, she says, it is important to talk to them while they are young.

“Girls open up to me about their own sad stories once they hear about my experience,” she says.

One such girl is Nomthandazo* (14) from a public school in Eswatini’s industrial town, Matsapha, who said she used to abscond from school when on her period because one day the newspaper she was wearing fell off and she was became the target for ridicule at school for a long time.

With no money to buy pads, she pretended to be going to school and would hide from her parents for about a week until her period was over.

“I now use rags. They take long to dry but they’re better than newspapers,” she tells IPS.

Some parents fail to have a conversation with their children about periods. For instance, Temphilo* from rural Sihhoye told her stepmother as soon as she saw blood, thinking that there was something wrong with her. Indeed, there was, according to her stepmother, who beat her up and accused her of having sex.

“I bled for almost a month and she didn’t even take me to hospital because she felt I brought it on myself,” Temphilo tells IPS. After that first irregular period, her periods followed the regular course of lasting 4 to 5 days.

But it took Mkhaliphi to assure her that menstruation is a natural thing that occurs to every woman and she should not be ashamed of herself because of it. So far, Mkhaliphi has reached over 3,000 girls since she started this initiative after she was retrenched from her work as a legal secretary in 2016.

“I get invited to many places where teachers and community leaders ask me to speak to learners and the youth in communities,” she says. “But it’s difficult to reach out to everyone because of lack of financial resources.”

Mkhaliphi has taken the conversation to Twitter, @nomcebo_mkhali where she now raises awareness. Twitter has exposed her to individual donors who contribute pads and a bit of money to support the girls. Given the number of places to visit and girls from poor backgrounds, she needs more assistance.

“It’s sad that most girls are still using unsafe materials which are not only inadequate for protection but can also lead to diseases,” she says.

The 2017 Eswatini Annual Education Census recorded that 220 girls absconded from school at primary level although the education was free. Reasons were not given for the dropouts but Mkhaliphi says it could partly be lack of sanitary wear.

“Building the girl’s confidence is not good enough if they won’t have access to the things that will preserve their dignity when they’re menstruating,” says Mkhaliphi.

Chairperson of the Ministry of Health Portfolio Committee in the House of Assembly, Mduduzi Dlamini, concurs with Mkhaliphi.

“It doesn’t make sense that sanitary wear is not provided for free both at school and at community centres,” says Dlamini.

A participant at the recent 25th International Conference on Population Development (ICPD25) in Nairobi, Kenya, he promised that the provision of free sanitary wear to girls was one of the issues that he would push for discussion in parliament.

“What I learnt from the conference is that when girls lack toiletries, like pads, they become vulnerable to sugar daddies who buy them these things,” Dlamini tells IPS. “Some girls end up getting infected with HIV by sugar daddies all because they didn’t have access to pads. Government needs to address this issue.”

So far, Kenya and Botswana are the only African governments on track to offer free sanitary wear by law.

*Names withheld to protect their identity.