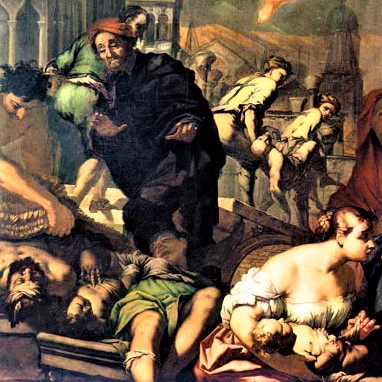 STOCKHOLM / ROME, Apr 30 2020 (IPS) - For some time Wuhan in China and Lombardy in Italy were epicentres of the COVID-19 virus, something that has changed when the contagion is spreading fast in the US. A Lombardy in the grip of a deadly epidemic might among several Italians give rise to memories of their school days. For almost a century, Alessando Manzoni’s massive novel The Betrothed (I promessi sposi) from 1842 has been obligatory reading for all Italians during their last primary school year. A quite impressive endeavour considering that the novel is more than 700 pages long.

I assume almost every adult Italian is familiar with the Divine Comedy, Pinocchio and, of course The Betrothed. No Italian novel has been the object of so much veneration, scrutiny and intense scholarship. I have been told by Italian friends that they are surprised that The Betrothed is not more known and appreciated outside of Italy and to my discredit I have often been forced to admit that I had not read it.

While being quarantined in Rome I picked up The Betrothed, thinking ”it´s now or never”. It proved to be an interesting acquaintance. Taking as its point of departure a small Lombardian community during the 17th century the novel described how poor, defenceless people experienced war, pestilence, foreign occupation, poverty, famine, power abuse, religious fanaticism, mafia rule, legal injustice and manipulative, corrupt authorities. These are common themes in other literary works as well, though what made The Betrothed a pleasure to read was Manzoni’s use of language. For being such an old novel it felt amazingly fresh. Alessandro Manzoni made use of a literary device by retelling a story while stating it had been written by another author. This enabled him to keep an ironic distance to his tale and being free to interpose witty comments about events and protagonists. Manzoni also occasionally reminded his readers that his story evolved within a well-documented, historical reality.

With mounting expectations I reached the last and third part of the novel – its famous description of the plague in Milan. Here Manzoni offers a description of a wide variety of reactions to a calamity that befalls an entire society: ”In any public misfortune, in any long disturbance of whatever may be the normal order of things, we always find a growth, a heightening of human virtue; but unfortunatly it is always accompanied by an increase in human wickedness.” 1

In 1628, the Holy Roman Empire included Lombardy, which became the scene of bloodshed and looting while French troops battled mostly German mercenaries, remunerated by the Spanish branch of the Habsburgs. Soldiers carried with them the bubonic plague. In Milan, the centre of Lombardian industry and commerce, authorities were implementing effective public health measures. However, relaxed regulations during the carnival season in 1630 caused a major outbreak of the plague and by the same time the following year, an even deadlier wave of the plague engulfed the city. Overall, Milan suffered approximately 60,000 fatalities out of a total population of 130,000.

Milan counted upon a Commission of Public Health with far-reaching authority. It consisted of one president, four magistrates and two doctors of medicine. Its decrees were effectively enforced by the police. Milan also counted upon a lazaretto, a quaratine hospital with 288 rooms, founded in 1489, where suspected plague victims were brought for observation and treatment.

Rumours about plague victims in surrounding villages reached Milan in October 1628. The Commission immediately dispatched medical doctors to the village of Lecco. However, they came back reporting that the outbreak of disease had probably been caused by vapours from surrounding swamps. Nevertheless, during the following weeks more plague reports came in from villages even closer to Milan. Two commissioners were sent out and came back with alarming reports that plague deaths now occurred all over the countryside and people were panicking. Milan’s city gates were closed and outsiders allowed in only under extraordinary circumstances, all incoming goods were stored and checked for vermin. In mid-November a patient No. 1 was traced, a certain Pier Paolo Locati had returned home dressed in German military clothing, probably taken from a corpse. Just a few days after his arrival, Locati had fallen down dead in a market square. All persons he had been in close contact with were tracked down and quaratined in the lazaretto, while their former living quarters were sealed off. The health commissioners visited the Spanish governor asking for taxes to be waived and economic assistance offered to shop keepers and others who were making a loss due to the enforced quarantine. The lazaretto also had to be enforced with doctors, surgeons, medicins, food and eqiupment. The governor declared he was desolated by the news, but since a war was waged against the French he could neither lower taxes, nor release any funds and he recommended opening the city for business again, regardless of the risks.

Probably due to efforts by the Commission of Public Health, Milan had so far not been much affected by the plague and people demanded that the quarantine had to be lifted. The City’s Chief Physician, eighty years old Lodovico Settala who had lived through another plague and constantly pleaded for even harsher measures, was almost lynched by an angry mob. When carnival celebrations were planned for 1630 a majority of Milan’s citizens pleaded with the City Council that restrictions had to be lifted. The town authorities gave in. Outsiders were allowed to enter, shops and restaurants were kept open. The commissioners of public health protested and even had a carriage with naked, plagued stricken corpses taken from the lazaretto and driven through the city as a warning of what could happen if people did not stay indoors.

Nevertheless, the Milanese went along with their carnival. A few days later the plague was completely out of control. Soon tens of thousands of plague victims were amassed within the lazaretto. However, most people continued to neglect the Commission’s decrees about social distancing. Instead, rumours were spread that the plague was not a common plague at all, but caused by a French manufactured substance intended to kill Lombardians, vanquish the Spaniards and take control over Europe. The substance was said to have been smeared on walls and doors by French agents, or spread among crowds in the form of a powder. People began to see so called anointers everywhere. Innocent people were lynched being accused of being anointers, even the authorities convicted and executed inculpable persons as anointers, just to prove they were taking measures to halt the plague.”Good sense was not lacking, but it was hiding from the violence of public opinion.” 2

Authorities and medical doctors, who assumed their prestige were dependent on people’s appreciation, adapted their ”expertise” to general perceptions. ”From the inventions of the crowd, educated men borrowed all they could reconcile with their own ideas; from the inventions of the educated, the crowd borrowed as much as they could understand […]. Out of all this emerged a confused and terrifying accumulation of public folly.” 3 The more fanciful these opinions were, the more unreservedly they were accepted: ”poisionous arts, diabolical operations, conspiracies of people spreading the plague by contagious venoms or black magic.” 4 Manzoni provided several examples of how ”educated” people to cover up their deficient knowledge of how a pandemic functioned and above all to avoid recommending the unpopular solution of social distancing, invented notions that the plague could not be stopped since it arose from ”cosmological phenomena”, or that it was caused by malevolent ”foreigners” who wanted to gain control over Milan. To combat the plague they recommended worthless medicines and remedies, anything but the unwanted quarantine.

It was Italian city states, depending on international trade, like Venice, Milan and Genoa, which were among the first to realize that the most efficient way to stop epidemics were to quarantine people. The word quarantena means ”forty days”, i.e. the designated period that crew and passengers suspected of being plague carriers onboard ships anchoring in Venice were required to be isolated for, before they were allowed ashore. The Venetian Senate had just in time before the arrival of the Black Death, in 1340 appointed three guardians of public health to control incoming ships and establish whether they carried the plague, or not. In 1403, Venice founded a lazaretto, an asylum for suspected plague victims on a lagoon island housing a monastery called Santa Maria di Nazareth (Nazaretto), which later came to be known as Lazaretto.

Officially supported installations and regulations eventually became a system of state controlled Public Health, of which Milan’s Commission of Public Health was one example. Trough such state entities the science of epidemiology gradually emerged. Viruses and bacteria were still unknown. However, Italian plague doctors like Girolamo Fracastoro (1483-1553) were 300 years before Louis Pasteur and Robert Koch speculating that contagious diseases could be caused by rapidly multiplying ”seed” transmitted by direct contact, through the air, or on contaminated clothing and linens. Such insights meant that lazzarettos and communes as a remedy against infectious diseases fostered health control and general cleanliness. It was agreed that such measures were effective only if implemented by a public heath system, free of charge.

The Betrothed described how common sense propagated by state supported commissions were impaired by populist community leaders. If something could be learned from a fascinating old novel like The Betrothed it is that even four hundred years ago trust in medical experience could have impeded a deadly pandemic. However, in 17th century Milan, leaders responsible for the well-being and security of their fellow citizens had apparently not learned from earlier mistakes. They ignored the dire warnings of the city’s Commission of Public Health and minimized the treats of an epidemic killer with disastrous consequences. Let us only hope that the current cataclysm is not globally repeated to the same horrific extent as in Milan 1630-1631.