PARIS, Jun 2 2020 - The film Haingosoa had barely made it onto screens in France when the government ordered a lockdown because of the Covid-19 pandemic. Theatres, cinemas, museums and other cultural institutions had to shutter their doors, leaving the arts world scrambling to salvage numerous projects. 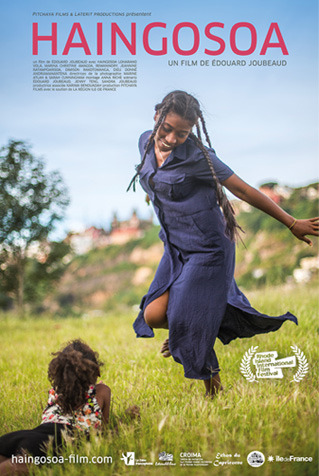 While the lockdown rules have now been eased, cinemas remain closed and Haingosoa – like many other films – is moving online. It will be offered via e-cinema and VOD from June 9, and viewers will be able to participate in virtual debates with its French director Édouard Joubeaud.

Haingosoa is ostensibly the story of Haingo – a young, single mother from southern Madagascar who, unable to pay her daughter’s school fees, leaves her family and travels far to join a dance company in the country’s capital. Haingo has only a few days to learn a dance that is totally foreign to her, and viewers follow her ups and downs as she tries to make the move work.

Played by the engaging real-life Haingo, the main character readily gains empathy, and viewers will find themselves cheering her on. Yet, the real star of Haingosoa is the music of Madagascar, as the director mixes drama and documentary to highlight the country’s rich and diverse artistic traditions.

“I wanted to give a different viewpoint of Madagascar, by focusing both on the woman lead and on the country,” Joubeaud said in an interview. “I’ve always been interested in the music, and I wanted to show the range of stories as well as the culture.”

Haingosoa brings together several generations of revered Malagasy composers and musicians, such as Remanindry, Haingo’s father. A leading performer of the music of the Androy, the island’s southern, arid region, Remanindry basically plays himself – and his own music – in the film.

Meanwhile, the Randria Ernest Company of Antananarivo, which provides the fictional dance space for Haingo, represents “in its own way” the dance and music of the highlands of today, according to Joubeaud.

Additionally, one of the composers of the film’s soundtrack is Dadagaby, an icon of Malagasy music whom Joubeaud knew for 10 years. The creator of countless songs popular in Madagascar, Dadagaby died during the making of the film – which is dedicated to his memory.

The movie also features 13-year-old prodigy Voara, who performs two of her songs: Sahondra (accompanied in the film by her father on guitar) and Mananjary. We see Voara singing in a backyard, as Haingo goes for a walk. The scene comes across as being there just for the music, with Voara’s soaring, memorable voice.

There are segments as well showing young musicians casually playing instruments and singing as they sit on a wall, and dancers practising to traditional music – again just to spotlight the distinctive music and array of vocal styles.

So, what about the story, the plot? To be honest, this is fairly simple: Haingo goes away to try to earn enough to pay for her little girl’s education. The boss of the dance company she joins is harsh and puts her to work cooking and washing rather than dancing. But with the help of her friends, including the gifted dancer Dimison, Haingo is able to reveal her true talent.

That is the surface story. The backstory is that the film is based on Haingo’s own life. She had a child at age sixteen and experienced many of the difficulties covered in the movie, and she’s at her most affecting when pleading for her daughter to be able to continue attending school, despite falling behind on the fees.

“You can feel the real emotion here because this is something she really had to deal with,” said Joubeaud.

As a director, he faced a dilemma, however: how much of the film should be about Haingo’s actual life?

“It was a little bit tricky,” he admits. “I didn’t want to expose too much about her life. So, we used her story as the starting point of the film and made a lot of the rest fictional. We wrote it in consultation with her.”

This reticence comes across in the film and may be seen as a drawback. The drama never reaches the high point that viewers expect, and the finale is more of a fizzle than a flare.

The unsatisfactory ending is also due to budget constraints, Joubeaud said. After completing the first half of the film, he ran short of funds and had to make a decision: stop filming or continue?

He decided to continue, especially as part of the reason for the film was apparently to raise money for Haingo’s daughter to continue in school, and for the main character to see how she could move forward. (Now in a relationship, Haingo, 25 years old, is the mother of three children.)

As a French director, Joubeaud could have perhaps accessed more sponsorship by making the film in French, but he shot it fully in Malagasy. He says he has studied the language for many years, after first visiting the country in 1999. The work, however, is not eligible to apply for screening in some African film festivals because of Joubeaud’s nationality.

“I do recognize the limits of a French director going to Africa, and I don’t pretend to give anyone any lessons,” Joubeaud said. “I see this as a personal project, related to my life and to Haingo’s life. I think my responsibility is to respect her consent, to respect all the participants in the film and to avoid stereotypes.”

Some viewers will indeed feel that they have gained an insight into the diverseness of Malagasy culture and developed a new appreciation for the music, but others will wish that the film had gone further and delved more deeply – into the socioeconomic reasons for Haingo’s situation and into the legacy of French colonial rule on the island. –