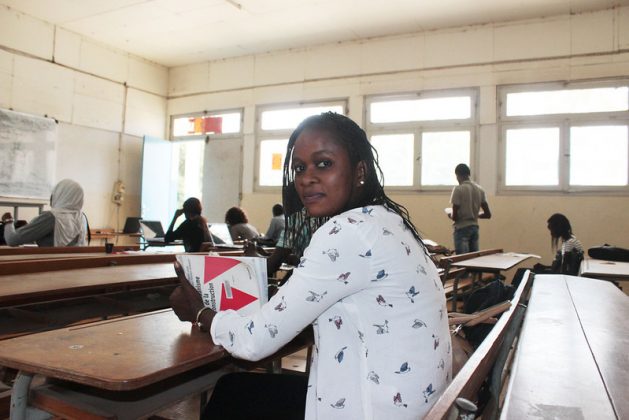 In Senegal, although gender parity has been achieved in favour of girls in primary education, the dropout rate at secondary school among female learners is high and few older girls remain at school and complete their education. Credit: Mikaila Issa/IPS

MBABANE, Jul 13 2020 (IPS) - When Fatima* became pregnant in the middle of the school year and dropped out, she was disowned by her parents. Hers is a story that could have ended as another statistic of dropout rates among female learners in Senegal.

But Fatoumata Fall, a member of the Réseau Siggil Jigéen (RSJ), an NGO that promotes and protects women’s rights in Senegal, heard about Fatima’s story from health officers at the Keur Massar Health Post. She approached municipal authorities for assistance.

Moustapha Mbengue, the mayor of the Keur Massar Municipality, offered moral and financial support for Fatima, enabling her to receive prenatal care. And the combined efforts of Fall and Mbengue also convinced Fatima’s parents to welcome their daughter back home. Mbengue also undertook to assist Fatima in continuing with her studies after childbirth.

It was a happy ending for Fatima.

Though many other girls in the West African nation face different realities.

According to the United Nations Educational, Scientific and Cultural Organisation (UNESCO), although gender parity has been achieved in favour of girls in primary education, where for every 100 boys enrolled, there are about 104 girls, the dropout rate at secondary school among female learners is high.

“Dropping out of school is significantly common not only in the transition from primary to secondary but also within secondary education,” observed UNESCO in its 2011/12 Global Partnership for Girls’ and Women’s Education fact sheet.

Alongside economic challenges, UNESCO mentions teenage pregnancy and early marriage as some of the reasons why girls do not remain at school and complete their education.

Fatou Gueye Seck, from the Coalition of Organisations in Energy for the Defence of Public Education (COSYDEP Senegal), told IPS the 2016 Multidimensional Review attributes the limited access to education for women and girls to early marriage, among other reasons.

Quoting a 2017 Organisation for Economic Co-operation and Development (OECD) report, Seck said 25 percent of girls aged 15 to 19 were married in 2014, compared to 4.6 percent of boys in the same age group.

“In Senegal, the gender index is still against girls,” Seck told IPS.

As a result, said Seck, the scale of illiteracy, especially among women in rural Senegal, is also symptomatic of the poor access to education. According to UNESCO, Senegal’s literacy rate for the population aged 15 years and above is 64.81 percent for males and 39.8 percent for females.

“This phenomenon remains very recurrent among women in rural areas where only 25.9 percent of them are literate,” Seck said.

Quoting an OECD report, Seck said since 2016, enrolments in Functional Literacy Centres, which give dropouts a second chance at learning, have fallen by more than half. The number of learners – 92.5 percent of whom were women – dropped from 34,373 to 15,435.

The OECD attributed this underperformance to the inadequacy of the overall amount of funding towards the National Ministry of Education, Illiterate Youth and Adult Basic Education, which is below 1 percent of public spending on national education.

“In this regard, the 2007 Bamako conference [African Regional Conference in Support of Global Literacy] on the financing of non-formal education recommended that States increase this ratio to 3 percent,” said Seck.

Seck is also the president of the education theme of the Deliver for Good Senegal campaign, an evidence-based advocacy and communication platform that promotes the health, rights and wellbeing of girls and women.

Powered by Women Deliver and various partners, part of the campaign’s activities are to help the country achieve Goal 4 of the Sustainable Development Goals – access to quality education for all. The campaign is calling for the increased funding for school-based reproductive health education to keep young people in school.

According to Seck, since the launch of the Deliver for Good campaign, the authorities of targeted municipalities have been successful in addressing issues related to education and sexual and reproductive health.

“As an example, [Mbengue] has been proclaimed ‘Mayor Champion of Education’ by his peers. In fact, the mayor made a commitment to increase the budget allocated for the reproductive health of adolescents and young people and declared himself a spokesperson for this cause to his fellow deputies of the National Assembly,” she said.

Seck stressed the important role of women in the family and in society, in general, adding that the more educated she is, the more crucial her place is in the economic and social development of the community. She said a society in which the percentage of educated women is high has more opportunities to access knowledge, economic, health and cultural assets than one made up mainly of illiterate women.

“Within the family, the role of the mother in the educational success of children in the family has been the subject of numerous studies, which have shown that children whose mother has a certain level of education are more likely to have successful studies than those whose mother is illiterate,” she said.

She said Senegal’s 10-year Education and Training Programme, which put in place an important strategy and resources for achieving parity within the deadlines of the Education For All goal, are beginning to pay off.

“Indicators have started to evolve in favour of girls even if the gains must be maintained in view of the cases of early pregnancies which constitute a real obstacle to the development of girls,” Seck said.